A home down the street from me went up for sale the other day. It's fun to keep track of the market activity around me, so I stopped by the open house to meet the realtor. When I got to the door and saw the asking price, though, my jaw dropped.

They're asking how much for... that!?

Since I keep track of real estate activity, I immediately knew they were asking at least $30,000 too much. "How could they possibly think they'll get that much for it?" I wondered.

The realtor greeted me and told me a bit about the owner. She had the home built herself and customized every aspect of it to her taste. She picked the carpets, countertops, fixtures, tiles, and paint colors. She'd really poured her creative energy -- and a lot of labor -- into this place. She saw it as a masterpiece.

Unfortunately, I saw a house like any other but with paint colors I'd never choose.

The seller was suffering a case of what's know as Ikea Effect -- a psychological phenomenon that explains how we come to love and value the things we put effort into.

In this case, our home seller was experiencing the negative side of the Ikea Effect, but there are a few positive ones you should know about because they can, in fact, save you a lot of money (or even make you a lot) and add an extra layer of happiness to your life. 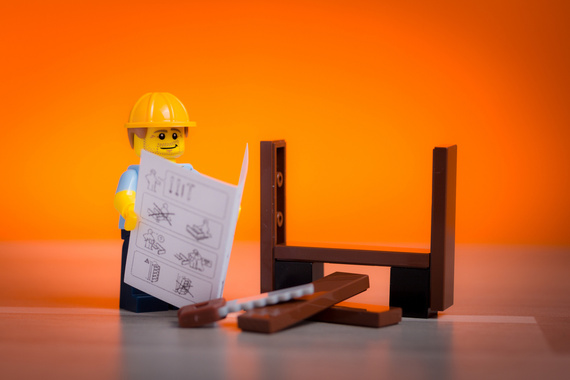 Ikea Effect: Why We Love The Things We Labor On

A few psychologists at Harvard had a hypothesis -- you'll pay more and enjoy more the things you create yourself. One of them had attended a Build-A-Bear workshop and walked away wondering why he spent so much on a teddy bear he had to put together when he could have spent half as much to have some else do it for him.

A psychologist as you know, though, cannot simply ask a question and leave it unanswered.

He and a few colleagues designed an experiment to test whether building something yourself -- even if the end result is garbage compared to the work of an expert -- will cause you to value your own creation higher. [1]

To test, they rounded up a bunch of college students, handed them a box of unassembled Ikea furniture, and set them loose to put it together. Over the course of several experiments, some subjects constructed their pieces masterfully. Others, not so much. Others, still, were instructed to build the piece and then take it apart.

At the end, each subject had the opportunity to buy the thing they'd just labored on. The ones who succeeded in finishing the project were eager to pay top dollar for the brilliant craftsmanship (that they judged themselves, of course).

To know just how top that top dollar was, though, there had to be a comparison. So, other students who were not part of the building experiment were brought in and shown the Ikea creations of the others and asked, "How much would you pay for this?"

Unsurprisingly, the answer was, "not very much!" All they saw was some shoddy furniture.

Across several different tests, the research showed people who built things themselves were willing to pay, on average, anywhere from two times to five times more than those who didn't.

That's how this phenomenon earned the name Ikea Effect. When it's in a box, it's just a pile of parts. But once you assemble it, it's your pile of parts! That furniture now represents more than just a chair, a box, or a 17-piece drawer organizer with specialty hinges. It represents your time, your attention, and your skill in creation.

You really do love what you make for yourself more than anything else, and that's why you pay so much more for a teddy bear you had to assemble yourself.

How To Profit From The Ikea Effect

Just knowing you'll enjoy and appreciate the things you sweat for more than the things you don't will pay huge dividends in life. Rather than opting for ready-made solutions, you'll find happiness in the struggle of creating your own.

When you value the things in your life more, you're less likely to want to replace them as often. I had a special bond with my old car because I always worked on it myself. And when my iPhone broke down last year, I pulled it apart and learned to fix it so I could keep using it.

And if you run a business, you can reap massive rewards by putting the Ikea Effect to work for your customers. Whenever you can, let them customize the products and services you offer to fit their needs. Make them feel like their own creativity and effort went into getting what they need from you. They'll pay more for it. [2]

So labor on and love your creations. The science suggests you really don't have a choice, anyway.

1. The "IKEA Effect": When Labor Leads to Love

2. The research did find, though, that people only paid more when they were successful at completing their task. If they failed, the effect disappeared. Keep this in mind!

This article was originally published at Riskology.co.