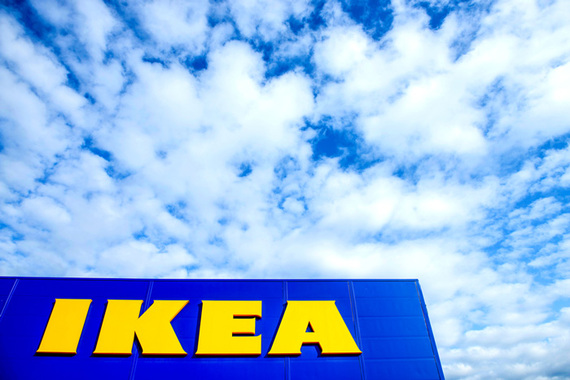 Got kids? Then chances are you've got IKEA furniture. Or maybe you're an IKEA design hack, one of those cost-conscious DIYers repurposing IKEA products into functional design masterpieces.

Of course, if your child goes to college near an IKEA store, like mine did, a pit stop is in order for a "treasure box of textiles" and a BJORN bookcase (sans the missing nuts and bolts). And while you're schlepping that blue and yellow FRAKTA shopping bag, the psychological impact of a few dozen GLIMMA unscented tealights does wonders to thwart off the blues of an impending empty nest.

In IKEA's ongoing quest for affordable responsible shopping that provides a "positive impact on people and the planet," the store applies a microscope to everything it sells. Even their iconic Swedish meatballs have gotten a healthy makeover. Examining ingredient production and animal welfare, IKEA recently started serving nutritious veggie meatballs, making this meatless mom a happy shopper.

So let's face it, IKEA is not just a store -- it's an experience. But can the world's largest furniture retailer seriously slow climate change?

In a Reuters interview, IKEA's Chief Executive Peter Agnefjall, outlined a plan that fits with IKEA's commitments. Without putting the cost burden on its customers, IKEA is pledging to invest 600 million euros in wind and solar power, adding to 1.5 billion invested since 2009 as part of a goal of making it energy independent.

The charitable arm of the family-owned store, The IKEA Foundation, would invest 400 million euros in supporting families and communities in nations vulnerable to impacts such as floods, droughts and desertification.

According to IKEA, the company already has over 300 wind turbines and about 700,000 solar panels at various stores worldwide.

Will this take a bite out of climate change?

To add to IKEA's social and environmental policy, Agnefjall has set the affordable design store to become a leader among companies upstaging world governments in the fight against climate change, "People want their leaders to lead. That includes companies like ourselves."

Hey Washington, are you listening? We can't shop our way out of climate change without you too. Please show us your commitment to our children's... and your children's futures, by supporting America's Clean Power Plan.