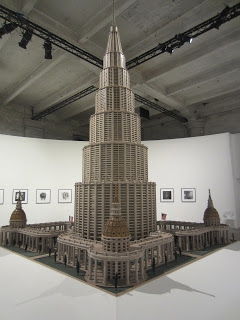 Il Enciclopedio Palazzo Del Mundo was a creation of Marino Auriti an Italian immigrant who ran a auto body shop in Kennett Square, Pennsylvania. It was basically an architectural model which would become a literal reality maybe not in the form he envisioned but as the theme for the current Venice Biennale, Il Palazzo Enciclopedio. It also became a de facto reality considering the tsunami of data that is now the condition of man. As the current Biennele attests art is produced with such ferocity that the invasion of imaginative works is like that of some form of killer bee in a Roger Corman movie. For all the brilliance of the works, walking through the Arsenale, where part of the Biennale takes place, in the middle of an August heatwave, is Auschsvitz. You are dripping wet when you're finished and almost numbed by everything from video works by Steve McQueen to R. Crumb's Book of Genesis which fills a wall. Many of the artworks are self-referential to the extent they are about the profusion of art. They are about plethora itself. The Spanish Pavilion boasts a huge mound by Lara Almarcequi, 500 square meters of rubble composed of 225 square meets of brick and mortar, 152 square meters of cement and concrete, amongst other ingredients. You wander next to the Belgian pavilion to find "Cripplewood," a monumental wounded tree which is a collaboration between the South African writer J. M. Coetzee and the artist Berlinde de Bruyckere. The Japanese artist Kohei Yoshiyuki captures voyeurs in a Tokyo park--a bit of one-upmanship of Thomas Struth's capturing the more innocent voyeurism of museum goers. And you relive the epistemological argument between Andre Breton and Roger Caillois over what makes a Mexican jumping bean jump. A series by the Australian anthropologist Hugo Bernatzik, who died in l953, offers "graphic works of Southeast Asia and Melanesia" by indigenous peoples. The artist Sarah Sze, represents the U.S. with her lo tech collages of cultural detritus that are permeated with epiphanic moments in which the artist's esthetic seems to rise Phoenix-like from her own rubble. Imran Qureshi creates Persian miniatures of contemporary figures. No Palazzo Encliclopedico would be complete without some mention of Carl Jung and the original of his Red Book graces the exhibition.There is a model of Auriti's Palazzo at the entrance to the actual Biennale. He'd hoped it would stand at the center of the Washington Mall as the highest building of its time, a Tower of Babel that wouldn't fail. The curators describe Auriti's Palazzo as being

"Designed to show the entire range of humanity's achievements--from the wheel to the satellite and from ancient artifacts to the most vanguard art."

The current Biennale takes up where Auriti left off.

were the words Dante famously coined on the way to hell. The same might be said about parsing so much art. But it's a heavenly kind of hell.

{This was originally posted to The Screaming Pope, Francis Levy's blog of rants and reactions to contemporary politics, culture and the arts}