In a letter to an orphaned nephew dated December 5, 1790, George Washington wrote: "A good moral character is the first essential in a man... it is therefore highly important that you should endeavor not only to be learned, but virtuous."

Similarly, four other of our most prominent founding fathers echoed this sentiment on various occasions, in various forms, from writings in The Federalist Papers to speeches at state ratifying conventions, saying:

Thomas Jefferson: "...never suppose that in any possible situation, or under any circumstances, it is best for you to do a dishonorable thing, however slightly so it may appear to you."

John Adams: "Because power corrupts, society's demands for moral authority and character increase as the importance of the position increases."

And James Madison: "To suppose that any form of government will secure liberty or happiness without any virtue in the people, is a chimerical idea."

With quotes such as these, it is difficult to argue that virtue, morality and character did not play a profoundly important role in the lives and minds of our founding fathers, not only in drafting a constitution -- and thereby forming a country that would come to forever alter the course of history -- but in everyday life occurrences, as George Washington's letter to his nephew confirms. 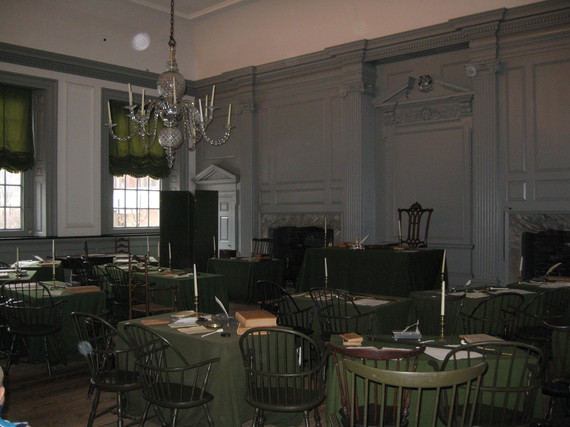 But, while they advocated on behalf of these characteristics -- recognizing their significance and merit -- they certainly weren't ignorant of mankind's nature and inherent vices, warning time and again against encroachments by those in power. Indeed, in a speech at the Virginia Constitutional Convention in December 1829, James Madison said: "The essence of government is power; and power, lodged as it must be in human hands, will ever be liable to abuse."

It is with this in mind that we turn to a recent op-ed in The New York Times co-authored by David N. Cicilline, a Democratic representative from Rhode Island and Scott Rigell, a Republican representative from Virginia. Entitled "Teach Congress a Lesson", it makes a compelling, thought-provoking case for the need for mandatory ethics training for Congressional members.

It isn't difficult to understand why. As the article aptly points out, Congress' approval ratings have gone "from bad to worse to outright terrible", having dropped to 15 percent from 40 percent in 10 years -- close to the record-low yearly average of 14 percent in 2013.

Furthermore, the number of disciplinary actions filed against congressional members by the House Ethics Committee has quadrupled since 2008.

The article also cites an oft-overlooked issue that is becoming increasingly prevalent among those in power -- namely, "the perception that lawmakers believe the rules don't apply to them."

Needless to say, the mere idea that members of Congress should be required to take annual ethics training speaks volumes about how far we have strayed from our founders' values, but may be necessary as a first step toward restoring decency and respectability in our nation's capital. As Mrs. Cicilline and Rigell state, it is a "simple, common-sense" step and a reminder to congressmen that they have a responsibility to lead by example, beginning with their actions and behavior both in their private and pubic lives.

As Samuel Adams once said, "He who is void of virtuous attachments in private life is, or very soon will be, void of all regard for his country. There is seldom an instance of a man guilty of betraying his country, who had not before lost the feeling of moral obligations in his private connections."

Morality. Virtue. And propriety. Such seemingly simple notions that are often thoughtlessly bandied about. Yet, when decent behavior and good form are neglected in the private and public sphere, the consequences can be utterly profound. How astute Thomas Jefferson was to say that: "A nation, as a society, forms a moral person, and every member of it is personally responsible for his society."

And so, with the 114th Congress now in session, it is our hope that leaders and common folk alike will take to heart the following words, spoken nearly 140 years ago by James Garfield, the 20th president of the United States -- words which are more critical today than any other time in our history:

"Now more than ever before, the people are responsible for the character of their Congress. If that body be ignorant, reckless and corrupt, it is because the people tolerate ignorance, recklessness and corruption. If it be intelligent, brave and pure, it is because the people demand these high qualities to represent them in the national legislature...If the next centennial does not find us a great nation...it will be because those who represent the enterprise, the culture, and the morality of the nation do not aid in controlling the political forces."

I'll vote for that.