Niranjan Lal Pathak couldn't believe his luck initially. When a doctor at a hospital in central India offered the factory watchman free treatment for a heart complaint, he jumped at the chance.

It was five years ago and the family of the 72-year-old says he didn't realise that the Maharaja Yashwantrao Hospital in the city of Indore was about to enroll him in a trial of an untested drug.

"We were told that our uncle will be treated under a special project," his nephew Alok Pathak told AFP over the phone from Indore, the largest city of Madhya Pradesh state.

"The doctor said we wouldn't have to spend a penny. There was only one condition placed before us -- that we should not approach local chemists if we ever ran out of his medicines but go straight to the doctor," he said.

A petition filed by the family in India's Supreme Court alleges that the drug tested on him was Atopaxar, developed by Japan-based pharmaceutical company Eisai and supposed to treat anxiety disorders.

His family and health rights group Swasthya Adhikaar Manch (Health Rights Platform) say that he would never have enrolled for the trial had he known that an untested drug would be administered.

The family also claims that the side-effects of the drug left Pathak suffering from dementia.

"He barely recognises us. His life is finished and so are our hopes to see him healthy and happy again," Alok told AFP, his voice choked with emotion.

Many desperate and poor people in India are unwittingly taking part in clinical trials for drugs by Indian and multinational pharmaceutical companies that outsource the work to unregulated research organisations.

The record of Pathak's treatment was maintained on a medical card and his family is now fighting a legal battle, one of scores of cases brought by people who say they are victims of illegal trials.

Testing pharmaceuticals on humans is a mandatory and expensive step for drug companies who must prove to regulatory authorities that treatments have no dangerous side-effects in order to bring them to market.

The Confederation of Indian Industry estimates that companies save up to 60 percent by undertaking the different phases of testing a new drug in India as compared to developed countries.

The clinical research market in India grew by 12.1 percent in 2010-11 with revenues of $485 million, according to report by Frost and Sullivan, a global business research and consulting firm.

The study, released in July last year, projected the industry to reach the one-billion dollar mark by the end of 2016.

But the legal case in the Supreme Court, which began in February last year, has helped to bring to light many of the alleged misdeeds by doctors in connivance with pharmaceutical companies.

"There has to be some sense of responsibility. Human beings are treated like guinea pigs," Supreme Court judges R.M. Lodha and A.S. Dave said last year in a written statement.

In Pathak's case, the hospital says the doctor who treated him administered the drug without authorisation and had since left the institution, while Eisai declined to comment, saying it was unable to respond to enquiries on individuals.

"Eisai is committed to making a meaningful contribution under any healthcare system and undertaking all of its activities adhering to the highest legal and ethical standards," it said in an email to AFP.

Health campaigner Amulya Nidhi says the lack of strict regulations has prompted many pharmaceutical companies to look to India and other developing countries for the tests.

"In Europe and the United States the laws are pretty strict. India, on the other hand, makes for a less restrictive destination for drug trials because the regulator lacks teeth," said Nidhi, who works for the Swasthya Adhikaar Manch group.

Swasthya Adhikaar Manch, which is fighting on behalf of some of the trial victims, says most of them visited hospitals for routine treatment but were subjected to trials without their "informed consent".

"In almost all the cases there is no genuine informed consent," said campaigner Nidhi.

"The label on the medicines often does not specify that it is meant for trial, and vulnerable people end up being used as lab rats," he said, showing one such drug sample to AFP in New Delhi.

Faced with widespread criticism, the government is amending the old Drugs and Cosmetics Act in order to fix greater responsibility on companies and ethics committees which are supposed to oversee the trials, although no timeframe for completion has been given.

As per the law, the subject of a trial or his family must be given copies of the patient information sheet, consent form and a clinical trial liability insurance policy.

Sonia Shah, author of "The Body Hunters: Testing New Drugs on the World's Poorest Patients", says it is imperative to find a way to balance the need for research with the full protection of patients.

"Under-financed hospitals and clinics gain expertise, funding, and often new equipment when they conduct clinical trials. Patients who lack access to regular care can get treatments otherwise not available to them," she told AFP.

"The question is whether these benefits are in keeping with the health priorities of the country and whether they outweigh the risks," she added.

The Indian state of Madhya Pradesh, home to the Pathaks, has been at the centre of the trial scandal since 2004 when doctors were accused of using victims of the 1984 Bhopal gas disaster for trials without their consent.

The non-profit Bhopal Group for Information and Action, which fights for the rights of thousands left disabled by the world's worst industrial disaster, said that 14 people died as a result of these trials.

The state was once again under the spotlight last year when a fine of just 5,000 rupees ($92) was slapped on 12 doctors found to have conducted illegal trials on children and the mentally disabled. 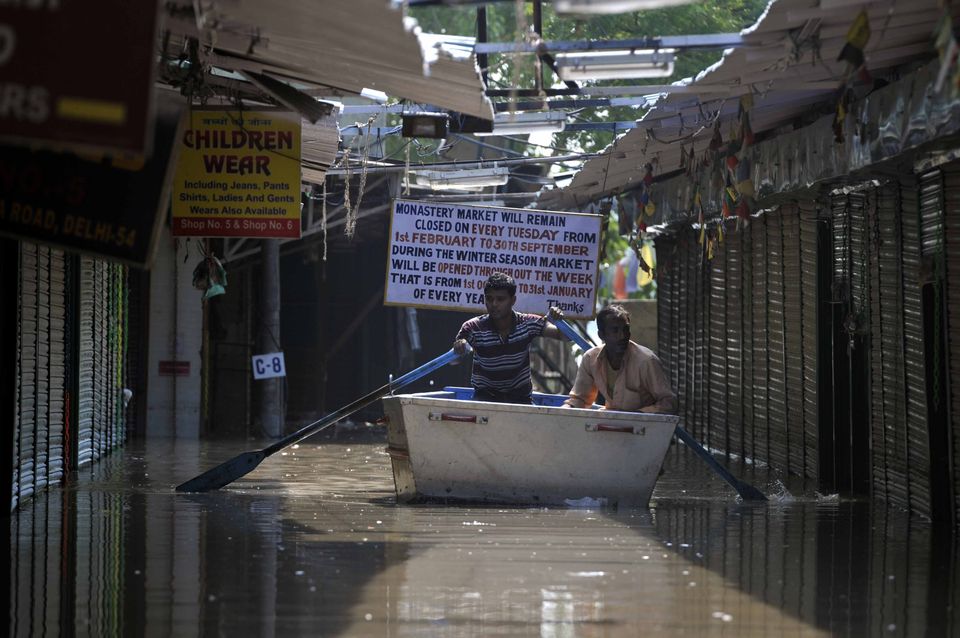 1 / 28
A rescue boat sailing through the water logged lanes during flood in river Yamuna on June 20, 2013 in New Delhi, India. Low-lying areas along the Yamuna remained submerged for the second consecutive day though the water level in the river started receding today. (Photo by Arijit Sen/Hindustan Times via Getty Images)
Getty Images