A group of conservative students at the University of Texas at Austin is planning on hosting a "Catch An Illegal Immigrant" game that involves participants "capturing" volunteers masquerading as undocumented immigrants.

According to a Facebook event page promoting the game, several volunteers wearing "illegal immigrant" labels will be walking around the college campus Wednesday. The UT chapter of the Young Conservatives of Texas (YCT) said it will be giving $25 gift cards to students who are are able to "catch" these volunteers.

As of Monday afternoon, almost 150 people had indicated they would be attending the event. 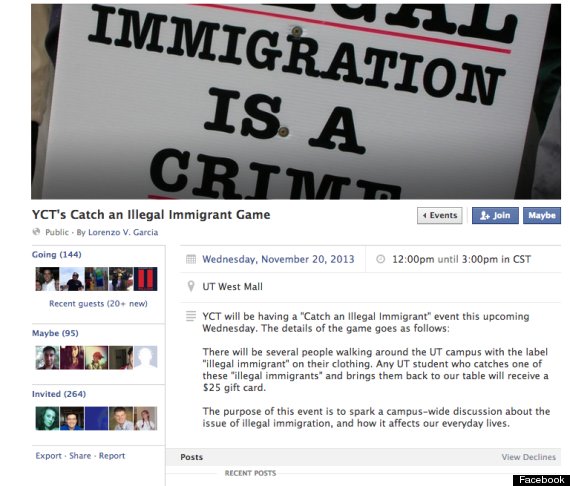 Lorenzo Garcia, chairman of the university's YCT chapter, has insisted the game is not meant to promote prejudice, but to start a debate, according to the Texas Tribune. Garcia did not immediately return The Huffington Post's request for comment.

"The purpose of this event is to spark a campus-wide discussion about the issue of illegal immigration, and how it affects our everyday lives," the group wrote on Facebook.

Backlash to the event has been swift, however, with Facebook users and politicians raising the alarm.

"There's a difference between bringing awareness and making a mockery of the subject," wrote one Facebook user Monday. "By no means will this actually help, and for that matter actually does more harm than good."

"This is not what Conservatives/Republicans stand for. You are giving the Conservative ideology and Republican party such a bad representation. I just hope people don't judge the ideology and party as a whole for this mistake," wrote another.

"Greg Abbott has already put fear into the hearts of hardworking college students in Texas, through his refusal to take a real position on the Texas DREAM Act," Hinojosa wrote in a statement obtained by HuffPost. "And now one of his staffers is organizing theatrical arrests on campaign. Our young and promising DREAM Act scholars already live in enough fear of Abbott, without his staff also forcing them to watch mock arrests."

An Abbott spokesman confirmed to the Texas Tribune that Garcia used to work for Abbott but said the student left the team several weeks ago.

Abbott has said previously that he wants to reform the Texas DREAM Act -- a 2011 law that allows undocumented immigrants brought here as children to pay in-state tuition at state universities. The gubernatorial hopeful, however, has been vague as to what changes he would recommend if he were elected governor.

Gregory Vincent, the university’s vice president for diversity, has said participants would be "exercising their freedom of speech 'to the detriment of others,'" the Associated Press writes.

“If the members of YCT carry out their plan ... they are willfully ignoring the honor code and contributing to the degradation of our campus culture," Vincent said in a statement. AP notes violating the honor code could result in expulsion.

This is not the first time the UT chapter of the YCT has courted controversy. In October, the conservative group was heavily criticized for hosting an "affirmative action bake sale," during which brownies were sold at different prices based on the customer's race.

At the time, Garcia said at the time that he wanted to demonstrate that affirmative action is "demeaning to minorities" and creates "reverse discrimination."

UPDATE (Nov. 19): On Tuesday, Garcia announced that the UT chapter of the YCT has canceled Wednesday's "Catch An Illegal Immigrant" event.

"After the University President and the Vice President for Diversity and Community Engagement released statements denouncing the event we planned as violating the university's honor code, I spoke with our chapter's members, and they are both concerned that the university will retaliate against them and that the protest against the event could create a safety issue for our volunteers," he said in a statement.

PHOTO GALLERY
Most Conservative Colleges According To The Young America's Foundation