UPDATE: This week, authorities announced that Josée Landry and Michel Beauchamp would be allowed to keep their front yard kitchen garden. The move comes after a successful petition by garden advocate Roger Doiron, which was signed by more than 29,000 people. Moreover, officials say they will enlist the couple to help implement new gardening guidelines. 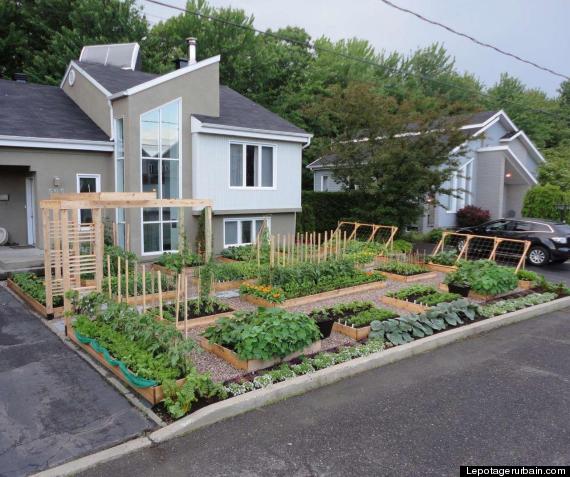 The only problem? It's illegal.

Boing Boing points us to a petition to save the garden, which authorities insist must be removed. The town code states that a vegetable garden can take up 30 percent of a front yard at most, and Landry and Beauchamp's is in violation. They were given two weeks to comply, which means the garden must be drastically scaled back by this Sunday.

The petition reads in part:

Front yard kitchen gardens are not the problem; they're part of the solution to healthier and more sustainable communities. Thanks for helping us to defend them.

CBC News reports that if the couple fails to remove a significant enough portion of their garden, they could expect fines of between $100 and $300 each day. The news site also reveals authorities say neighbors have complained about the garden, but Beauchamp is suspicious:

Beauchamp said no one has complained to him. He said he shares his fresh produce with his neighbours.

"They love it. Everybody is surprised by the kind of taste we can have from fresh vegetables," he said.

The couple said they have no intention of complying with the city's request.

CBC also notes that the city plans to make all front lawn vegetable gardens illegal this fall. The measure would only apply to new gardens, so Landry Beauchamp garden -- assuming they scale it back -- will be perfectly legal.

How does the larger gardening community feel about attempts to remove the garden? Boing Boing has a quote from kitchen garden advocate and expert Roger Doiron: "If this garden is deemed illegal, we're in deep you-know-what."

Learn more about the couple's personal website, Le potager urbain. Fair warning, it's written in French. Language barrier or not, the pictures are pretty cool.

Watch the making of the couple's garden in the video below. What's not to like?

Things You Probably Aren&#039;t Doing In Your Garden
More:
GardeningVideokitchen-gardenFoodCanada
Newsletter Sign Up
An essential daily guide to achieving the good life
Subscribe to our lifestyle email.
Successfully Subscribed!
Realness delivered to your inbox