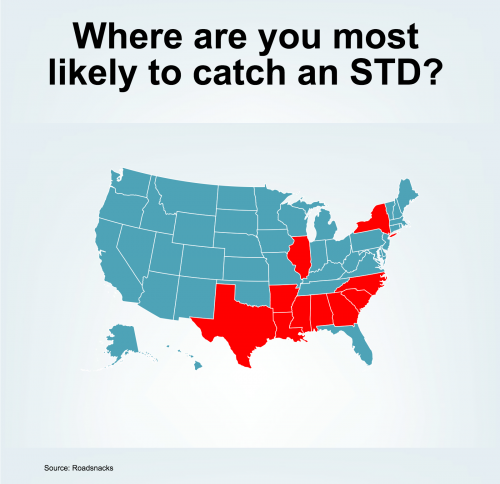 The Prairie State is one of only two northern states to make Roadsnacks' Top 10 list of states where you're most likely to catch a sexually transmitted disease.

Roadsnacks studied which states have the highest rates of common STD infections compared to population and compiled data from the Centers for Disease Control on three of the top STDs: chlamydia, gonorrhea and syphilis.

According Roadsnacks, Louisiana is by far the state where you are mostly likely to catch an STD, even with Mississippi ranking at the very top of two categories.

But Illinois has its own health care struggles, due in part to the budget impasse. Without a budget, funding isn't available to some health services, including mental health care and HIV/AIDS prevention.

As shown in the map above, here are the 10 states in which you're most likely to catch an STD, along with individual rankings for the prevalence of chlamydia, gonorrhea and syphilis.

NEXT ARTICLE: Are lawmakers taking advantage of the state's lax campaign finance laws?