The Illinois House of Representatives will not vote on a bill that would legalize same-sex marriage in the state this session, delaying the matter to be considered next this fall at the earliest.

State Rep. Greg Harris, the bill's sponsor, addressed the House floor Friday evening and announced that he would not be calling the vote Friday because House colleagues asked for more time to consider it.

“I’ve never been sadder,” a teary-eyed Harris said of his decision, the Chicago Phoenix reports. 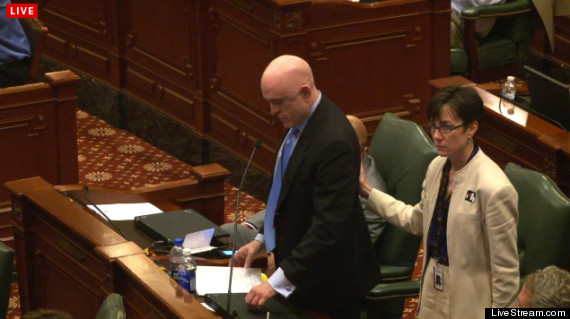 Harris (left) is comforted by state Rep. Kelly Cassidy, a fellow Chicago Democrat, as he announces he would not call the marriage bill for a vote.

Harris' speech was met with a standing ovation, as was another speech by state Rep. Deb Mell, who discussed her marriage to wife Christin Baker. Harris, Cassidy and Mell are three of four openly LGBT members of the Illinois House.

Greg Harris gets a standing ovation from the packed chambers. #twill pic.twitter.com/11sHZXo5lP

The marriage equality bill was already approved by the state Senate and Gov. Quinn has vowed to sign it -- so the House vote is the last remaining obstacle to its passage.

Prior to Harris' announcement, BuzzFeed's Chris Geidner previously reported, based on anonymous sources, that there will be no vote on the marriage equality bill Friday evening. Other prominent journalists reported similar news.

Responding to the bill's failure this session, Chicago-based LGBT advocacy group The Civil Rights Agenda released a fiery statement placing the blame on a process that was not inclusive of racial minorities.

"From the beginning, we have been upset about the lack of diversity and inclusion in this process," Anthony Martinez, executive director of The Civil Rights Agenda. "Unfortunately the Sponsor didn't include people of color in the sponsorship of the bill and the rich white guys from the north side of Chicago thought they could get it done with their checkbook. That was the downfall of this bill. We will continue to push and get this done."

Advocates both for and against the bill were long viewing members of the Illinois House's Black Caucus as the key "swing" votes on the matter and a Capitol Fax report published Friday morning indicated that marriage equality advocates had only one African-American lobbyist involved in their push in Springfield until Thursday afternoon.

State Rep. Ken Dunkin, chair of the Black Caucus, told the Windy City Times after the failure to call a vote that it would be unfair to pin the delay on his caucus, adding that he felt more undecided lawmakers may have been swayed by stirring speeches on the House floor urging for their support.

Meanwhile, the Illinois Unites for Marriage coalition released a statement calling the failure to call a vote "disgraceful" and "simply unacceptable."

Harris added, "I am sad to say that our bill, which would give all Illinoisans the freedom to marry, was not called in time before the end of session. However, we cannot let our disappointment today distract us from the fact that equal marriage will soon be a reality in Illinois."

"More than 100" advocates for the same-sex marriage bill gathered Wednesday and sang patriotic songs including "God Bless America" and "This Land is Your Land," the Windy City Times reports. Jim Bennett, chair of the Illinois Unites for Marriage coalition, stressed the urgency of the vote on the matter saying, "This is our day. There is no more time. It has to happen today."

Same-sex marriage advocates and sponsoring lawmakers alike were confident in the bill's chances earlier in the day, according to the Chicago Phoenix.

About an hour earlier Friday morning, "approximately 30" people opposed to same-sex marriage also came together in the rotunda of the capitol building, according to the Windy City Times. Pastor Danny Holliday of Victory Baptist Church said the state should have no role in "redefin[ing] marriage."

In the days leading up to the vote, both President Barack Obama and former President Bill Clinton voiced their support of the bill and urged the state legislature to advance the marriage equality measure.

"I am absolutely convinced it is the right thing to do," Obama said of the bill at a private fundraiser in Chicago on Wednesday, according to NPR. "And we have to make sure that wherever we go, we are reminding people that the essence of America is that everybody is treated equally under the law without exception."

Harris had also repeatedly said he would "absolutely" call the vote on the bill this session, while marriage equality advocates said in recent days that they believed the bill would pass.