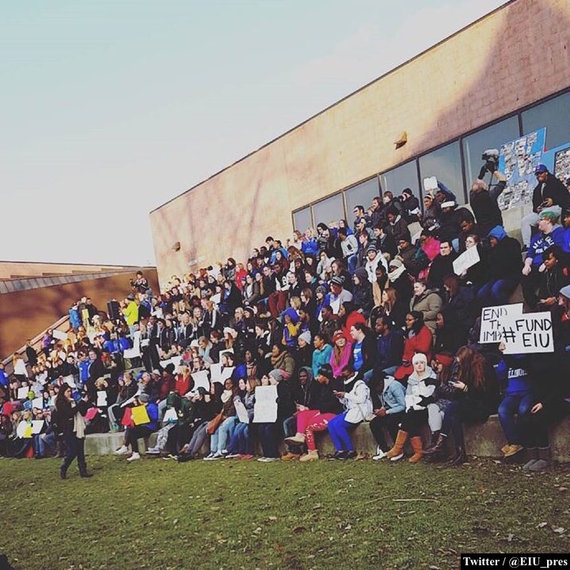 Our politicians appear to be hellbent on destroying our Illinois public colleges.

Here's the simple math: Public colleges have not gotten any taxpayer dollars since last July. They will get $0 for 2016 and take a cut if there's a 2017 budget approved at less than the 2015 level. Gov. Bruce Rauner's budget plan shows $1.95 billion for higher education in 2015 and $1.75 billion in the year that starts in July.

Rauner said all the 2016 money has been spent. Court orders and other legal mechanisms mean 90 percent of state government has been funded at 2015 levels when income tax rates were higher, putting us on course to spend $6.2 billion more than we take in. The 10 percent getting nothing are colleges and not-for-profit social service agencies.

That means the most vulnerable in our state and those associated with higher education get zilch, zero, nada, nothing. Rauner vetoed a Democratic bill that would have provided $721 million in aid to community colleges and to the Monetary Assistance Program that gives small grants to needy kids who were promised the money. Republicans have their own bills to send $1.6 billion to students and universities. They would find the funding by changing the way the state purchases things and by giving Rauner wide power to cut spending and move funds around.

Of course, neither party will help the other as both sides point and blame each other for the spilled milk like preschoolers.

"I'm disappointed in the governor," Illinois Senate President John Cullerton said. "He had a chance to back up his promises with funding. Instead, he let those students down again."

Monday, Rauner said, "I, personally, am a big advocate for our university systems. I want the best in America. I want a fully funded MAP grant program. I'm a huge supporter of scholarships for low-income kids." Universities are under House Speaker Michael Madigan's control, he said. "He won't do any reforms. We should be doing that today," Rauner added. "So far, the Speaker says no. He's blocking virtually everything we're trying to do."

Madigan has been in control of the House for most of the past 30 years. He and Cullerton have been passing unbalanced budgets for the past several years while refusing to put up votes themselves to raise taxes. Rauner expects to win a few changes after taking the governorship.

It's all about political power. The people be damned.

Are there too many administrators and some who are too well-paid at our state schools? No doubt. That's the complaint Rauner has with Chicago State. I'm a proud graduate of Eastern Illinois University and I know from experience, it's still a community where students can get personal attention, caring and a strong education.

I spent some time Saturday with about 300 college journalism students from all over Illinois. Every one of them was accompanied by one or more advisers who sacrificed most of a weekend.

Yet now we have high school counselors telling kids to pick out-of-state colleges. When you kill a college community like Eastern, you're hurting generations of future entrepreneurs, farmers, teachers and politicians. You're hurting dedicated support staff and instructors who give up nights and weekends to help their students. You're creating higher unemployment. You're hurting restaurants, bars, landlords and other businesses. You're hurting business owners and their families who depend on the colleges and students in places like Charleston and DeKalb and Carbondale.

I learned long ago that that's like cutting off your nose and poking out your eyes to spite your face.