Illinois Gov. Bruce Rauner has made his criticism of public unions clear, signing an executive order to stop mandatory "fair share" fees and expressing support for local "right-to-work zones" throughout the state.

Rauner's rhetoric quickly turned into action following his Feb. 9 executive order, which blocks government unions from withholding "fair share" fees from the paychecks of non-union state employees who work under union-negotiated contracts but do not pay union dues.

"A major reason why government unions are so dominant in Illinois is the decision to institute card check, forced unionizing in state government which had the effect of bullying and intimidating many state employees into joining the union," Rauner said. "Despite this, right now, over 6,500 employees of the state government are being forced to pay union dues even though they said they don't want to support them."

However, the fate of Rauner's executive order is uncertain. An opinion from Attorney General Lisa Madigan said Comptroller Leslie Munger, who was appointed by Rauner, is prohibited from enforcing the governor's mandate since executive orders can not change the conduct of other constitutional officers.

"After discussing this matter with all parties, Comptroller Munger will defer to the guidance of the Attorney General as it relates to what actions are within the scope of her legal authority."

For now, Rauner's order will apply only to employees in agencies under the governor's control.

New data from the U.S. Bureau of Labor Statistics show total public and private membership in Illinois fell from 15.8 percent in 2013 to 15.1 percent in 2014. However, when you isolate public union membership, it rose by more than 10,000 members during the same time period.

Check out these charts for an overview of Illinois public union membership since 2000, according to data from UnionStats.com. Non-union employees who work under union-negotiated contracts are classified as "covered." 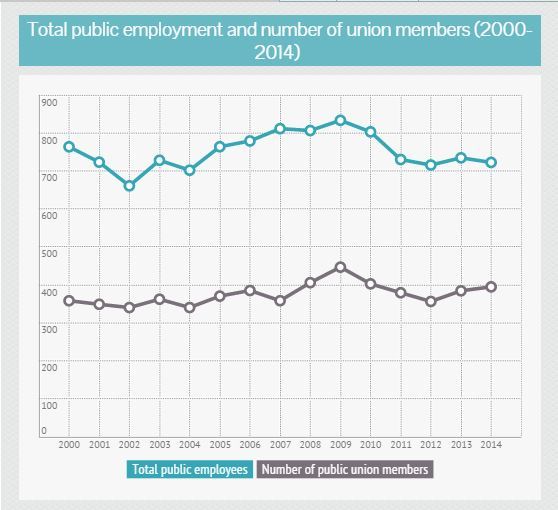 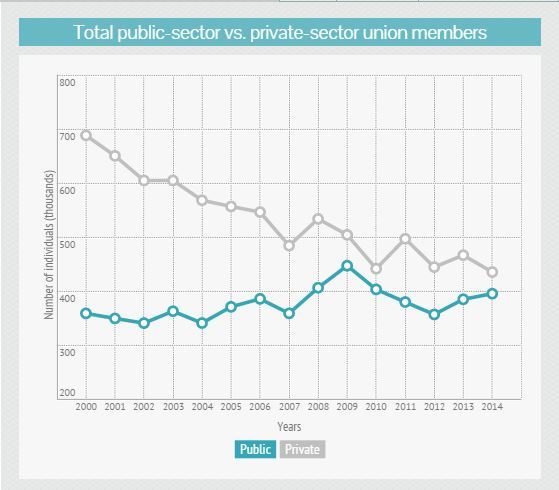 See more detailed information with interactive infographics at Reboot Illinois, including a look at public union membership by every state in the country.