This article is a guest view by Dannie Mahoney, the media relations manager with Truth in Accounting and State Date Labs.

It feels like driving around Chicago, all you see is pothole after pothole caused by winter weather. They're terrible for your car, and the traffic caused by construction to fix them is just as frustrating.

It seems to be an unending situation -- much like the state of Illinois' accumulation of debt.

While financial conditions in many states have shown improvement in the years after the recession that began in 2008, the economies of Connecticut, Hawaii, Illinois, Massachusetts, and New Jersey continue to deteriorate.

These five states are being called "sinkholes" by Truth in Accounting, a nonprofit think tank in Chicago that analyzes state data, because they have the highest debt per taxpayer after available assets are tapped. Here is a chart from TIA's sister website, State Data Lab, comparing the increase in debt from the recession until recently, for the five sinkhole states. 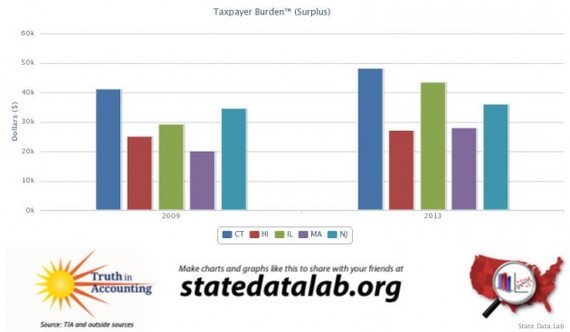 'Taxpayer Burden' is each taxpayer's share of their state's debt after setting aside capital-related debt and assets. Remaining debt is primarily unpaid pension and retirement health promises.

These five states are now in this dire financial situation because they did not make sufficient contributions to their state pension and retirement health care funds when they had the funds available to do so. This debt should be of grave concern to the citizens of these states.

According to a recent Standard & Poor's Rating report, the nation's been on the road to recovery for several years. However, as the nation moves up and out of this recession it will also eventually cycle down, and into the next recession. The past eight recessions since 1961 have occurred once every 6.6 years, on average, and 2015 is six years since the last recession.

Read the rest at Reboot Illinois to find out how much where Illinois' economy ranks in comparison to the rest of the country and what accounting practices got the state into this debt mess.