They say God gave Pearl her bright red hair and wide blue eyes, as well as the genetic disorder that created a cleft in her upper lip and caused her brain's development to stall in the first weeks in the womb.

"Things didn't go wrong," Eric Brown said. "God has designed Pearl the way he wanted, for his glory and our good."

That belief has sustained the Browns during the past six months, ever since a routine ultrasound revealed that the couple's third child has alobar holoprosencephaly, a rare genetic condition that's almost always fatal. A specialist told the Browns she would probably die in the womb and advised them to end the pregnancy early.

It's one thing to talk about God's will when life is good. It's another when a doctor is saying your baby won't live.

The Browns were forced to consider religious, medical and ethical issues most parents never will. And nobody could make their decision for them.

The Browns never considered abortion. They believe that Pearl is "fearfully and wonderfully made," as Psalm 139 puts it, and God alone should decide when she lives and when she dies.

Seeing Pearl's beating heart on the ultrasound also persuaded them to continue the pregnancy, even if the odds were stacked against her.

"If there is a chance, you say yes to that chance," Eric Brown said. "The only thing I know about parenting is that you say yes."

So far, Pearl has beaten the odds.

Few babies with Pearl's disorder make it to term, and of those who do, only 3 percent survive birth, according to the Dallas-based Carter Centers for Brain Research in Holoprosencephaly and Related Malformations. Pearl has a particularly severe form of the condition, which means her brain never divided into two hemispheres.

She turned 11 weeks old Oct. 12, a milestone that the Browns celebrated by lighting 11 candles and singing "Happy Birthday."

She'll likely never walk or read or speak. Doctors have given her a year. That doesn't matter to her parents.

"We didn't think she was going to be able to breathe," Eric Brown said. "We don't care about those things. She is here, and her brain is telling her how to live."

The living room of their tidy 700-square-foot cottage has been transformed into a nursery with Pearl's cradle wedged in the corner between a pair of couches.

Beside the cradle is an IV stand and pump that the Browns use to feed Pearl. She's not strong enough yet to nurse and uses a nasal gastric tube to eat. They also have an oxygen tank nearby, in case of emergency.

On the mantel across the room is a box packed with ultrasound photos of Pearl, along with letters and cards from neighbors and well-wishers from around the world who had read about Pearl on a blog run by a family friend.

For a while, the Browns thought these mementos would be all they would have of their daughter.

Eric Brown said they feared that she would be the "girl who was almost here" and that their other two children, Abbey, 3, and Brennan, 5, would never meet their sister face to face.

"This stuff is sweet, but now we have Pearl," her father said while thumbing through the box. "Even if she passes soon or she passes later, she is not going to disappear."

Still, the Browns know that they live in the shadow of Pearl's death. She has seizures on a daily basis, has a weakened immune system and has been back to the hospital at least five times in the past three months.

Something as simple as a common cold could end her life. But that day hasn't come yet, her mother said.

"She's fighting, and we're fighting with her," Ruth Brown said.

The Browns say their lives are nothing special. He's 31, she's 28. He works on the road crew for Christian musicians such as David Crowder, selling merchandise and shooting video. Ruth Brown is a stay-at-home mom.

They've had a lot of help along the way, from family and friends as well as members of The Village Chapel, a nondenominational church where the Browns have worshipped for the past year.

The Browns' support network has brought them meals and paid their bills when Eric Brown took several months off to help care for his wife and daughter.

Supporters also donated about $12,000 to buy a minivan for the Browns. Because of Pearl's condition, one of her parents always has to ride in the back with her, meaning the family couldn't all fit in their old car.

Eric Brown said he's grateful for the help, though it was hard to accept. He wants to be able to provide for his family. He's also grateful for the state's TennCare program, which is paying for Pearl's medical care. He estimates her care already has cost more than $1 million.

He knows that cost may anger some people, especially since the doctors advised his wife to end her pregnancy. "I don't have a good answer," he said. "The doctors told us not to (continue her care), and you should not have to pay. All I can say is thanks."

At first, not all their friends understood the decision the Browns made.

Kristina Guisler, a friend from the MOMS Club of East Nashville, met the Browns in 2009. When she first heard about Pearl's condition, she said she wasn't sure the Browns had made the right decision by continuing with the pregnancy. She wondered what kind of life Pearl would have.

But seeing the love that the Browns have for Pearl has changed her mind and strengthened her own faith.

"It's reaffirmed my faith in humanity and in the power of prayer," she said.

She's also been amazed at Pearl's personality and her ability to fight for life. "She's a little firecracker," Guisler said.

Nancy and David Guthrie of Nashville faced the ordeal twice: in 1998 and 2002.

The Guthries' son Gabriel and daughter Hope both died in infancy from a fatal genetic condition called Zellweger syndrome. In Gabriel's case, the Guthries learned he had Zellweger while he was still in the womb.

The couple recently brought a meal to the Browns and spent an evening visiting with them. Nancy Guthrie said that a fatal diagnosis can't overcome the love and joy that comes from being in the presence of a newborn who is loved.

Like the Browns, the Guthries believe strongly that nothing happens in their lives that is outside of God's control. They say it brings comfort to know the child will live exactly the number of days that God intends.

The Rev. Jim Thomas, pastor of The Village Chapel, said that believing in God's sovereignty doesn't mean that the Browns know why Pearl is sick, but it reminds them that they are not alone.

"You have two people with personal courage, a loving community and a sovereign God," he said. "That doesn't make it easier, but it does make it bearable."

Families such as the Browns have no easy answers, said Elizabeth Heitman, an associate professor in the Center for Biomedical Ethics and Society at Vanderbilt University Medical Center.

They are faced with the inevitable, often imminent death of their child, with no hope at the chance for a healthy life. So they grieve both the loss of their child and the dreams for the life that child could have had.

"The diagnosis of a fatal disease in utero is a terrible test of faith for anyone," Heitman said. "There is no right answer."

Letting go will not be easy. But the Browns say their faith tells them that death is not the end of Pearl's life.

"When she is done here on Earth, she is not done for good," Ruth Brown said. "Heaven will be easier for her."

(Bob Smietana writes for The Tennessean in Nashville.) 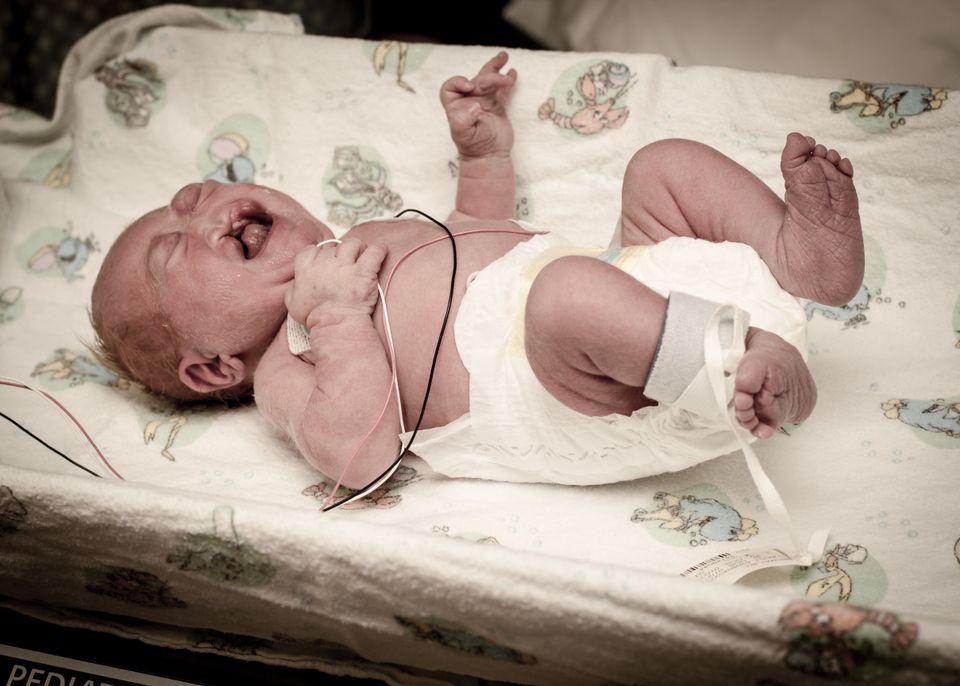 1 / 8
Eric and Ruth Brown Accept Daughter Pearl Joy's Illness Holoprosencephaly As 'God's Will'
Pearl Joy Brown is seen in this handout photo from the Brown family. Pearl was diagnosed in the womb with alobar holoprosencephaly, a rare genetic condition that's almost always fatal. Eric and Ruth Brown decided against an abortion that was recommended by a specialist.
Courtesy Eric Brown