In 2007, I began my special interest in "women's issues" and what I quickly found out was that women's issues were often men's inability to let go of power. Power it seems is the ultimate lure -- few can resist it, or renounce it, or share it. Power seeks to control what it fears most. And if we consider how many women are being physically and emotionally hurt solely on the ground of their gender, there is a great deal of fear.

Since 2007, I have met women from the world over and learned about what they are subjected to as females. From honor killings and acid attacks, sex trafficking and early marriage, to breast ironing and Female Genital Mutilation and forced illiteracy and rape as a weapon of war. The list is endless, but the means is always the same: violence moral or physical. The narratives seem to involve an obsession to policing the woman's body. Whatever the justification, the will to dominate remains the common thread.

I went to 18 countries to profile as many women and today, as the Managing Editor of the CHIME FOR CHANGE storytelling platform, I have been lucky to provide a place for these stories. Mostly first-person accounts that, I hope, create a patchwork of voices from women and girls singing a different song. I try to highlight women and girls who have been through a lot, and became beacons of wisdom for it. Flickers sparkling everywhere, hoping that lighting the way for themselves will allow them to illuminate others'.

I have now read, seen and heard hundreds of stories of women and girls, and I have never failed to find a will to seek change, at often high personal costs, for the sake of others. The feel, the context, the climate may be different for each person, but the will to work together and help one another are like blood -- of the same color.

Bonding through our stories is crucial because it can create a global dialogue in which each voice matters as opposed to the cacophony of opinions we tend to replace them with. Connecting the dots between your life and those of others is what women do well. Now is the right time to help women and girls tell their stories. Now is the first time in history, after countless wars and civilization cycles that this "human capital" is potentially blooming.

In early March of this year, I went to Iraq to deliver a storytelling workshop for young refugees, mostly Yazidi, who fled ISIS in Iraq. We met in Kurdistan, at first shocked and silent, the girls opened up like blossoming flowers over the days. One participant, a beautiful young woman named Sham chose to talk about her great aunt.

"People say that she was as brave as a man because they couldn't fathom women's strength. In fact it should be as brave as a woman," she said to me laughing. She showed me the photograph of a strong older woman, dressed in traditional Yazidi outfit standing among men in the dry mountains with a Kalashnikov strapped to her shoulder and a cigarette burning her fingers.

Today, for the first time, we start having a glimpse into these unknown powerful women on the trenches, being in Guatemala, the U.S. or the DRC who by their actions restore everyone's dignity. I have met women who feel that, for the first time, life could change and an unstoppable wave of people could stand against the weight of traditions and harmful beliefs. Today, we have the opportunity for this potential to expand and see women break their chains link by link to create instead a vast network of people believing in peace and knowing what it really takes.

Arianna and the Huffington Post are helping CHIME to raise funds for the next storytelling workshop like this, to be held in Athens. During this time of great difficulty in Greece and throughout Europe, women's voices are essential in raising awareness and catalyzing change.

Join us to support more female voices through the CHIME for Education campaign: crowdrise.com/CHIME. 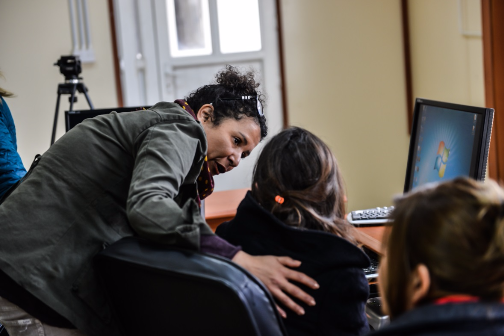 This piece was originally commissioned by Plan International.

Award-winning writer and managing editor of CHIME FOR CHANGE