You like the funny? I like the funny. But it must be the smart funny. A quarter century ago, wry performance artist Laurie Anderson sang, "I'd rewrite the Book of Love; I'd make it funny" -- and while we're still waiting for that tome (suggesting which way the wind is blowing, Ms. Anderson has instead made a new movie about her dog), another artist with exquisite wit has arrived to fulfill the promise. 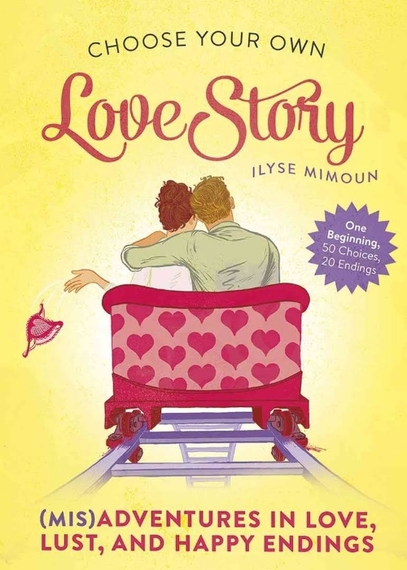 The artist is delightful multihyphenate Ilyse Mimoun, and her terrific new book, Choose Your Own Love Story, arrives just in time for Valentine's Day. I haven't cackled knowingly this much since I first read the Harvard Lampoon's Bored of the Rings -- which may be dating myself, but after arduous years in brutal L.A., I've gone pro at dating myself. Meanwhile, Ms. Mimoun really gets it. The writer, actress and comedienne has taken the general template of those fun Choose Your Own Adventure books, and adapted it to today's, uh, noteworthy dating scene. 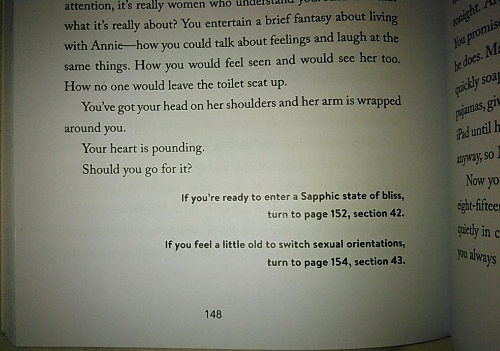 Choose Your Own Love Story: How it works

Guys and gals, Ilyse is taken, but you can still hang out with her for her big book launch party and comedy show at the Comedy Central Stage in L.A., February 4th, and it's as fun to chat with her as to zig and zag through her provocative prose. We find common ground in views on everything from Mad Max to Weird Science (Vernon Wells double feature!), share the unholy love of Garfunkel & Oates, plus she even honed her performance chops vehemently debating Revenge of the Nerds. Hello, dream interview:

I have your book -- it's like this neutron bomb of wit! Just open it, any page, and you're going to get nuked by wit.

How much of this, say, percentage-wise, is from experience and observation, versus fiction and creativity?

That's just what my mother wants to know, as well. I definitely drew on the experience of years of being in the lawless frontier of contemporary dating. Much of it is made up. And some of it's also based on what I've witnessed and observed. But the themes and underlying feelings are certainly something I know something about. In fact, the whole idea of a breakup being the inciting incident I definitely ripped from the headlines of my life.

There was a 'Greg,' and his name was Greg.

He was a wonderful person, but it was a very heartbreaking breakup, and I remember my therapist at the time telling me: 'It feels like the relationship is the great loss here, but really this rupture, the breakup itself, is going to be the thing that spurs your life forward. And what you grow from.' That's what, I guess you could say, is part of the inspiration for the book.

Were there episodes, when you were putting this together, where you said, 'I like this part,' or, 'maybe that part's going too far'?

Well, this actually began as a book of short stories -- so some of it comes from that work. And then it metamorphosed into a 'Choose Your Own Adventure' thing. At that point, I was just sort of no-bolds-barred following my bliss.

That's always a good philosophy. How about the training that went behind it? It's really witty. It's not common, I think, for even the most open-minded male to open a romance book and start giggling.

I am so thrilled -- I don't actually think of it as a 'romance' book.

I'm sorry! A book with romance as a theme, though?

Yeah, absolutely. I just mean it's not, like, you know, one of those Harlequin books.

Look, I don't know you, but I would never ghettoize you like that.

(laughs) Thank you! And thank you for using 'ghettoize' as a verb.

(laughs also) Yes, and we can continue 'conversating' now. No, I'm glad that you pick on guys who can't spell, in chat rooms and stuff. I think that's hilarious.

Oh, yeah! I ended up marrying a wonderful nerd -- those are always the best. What was your question again? 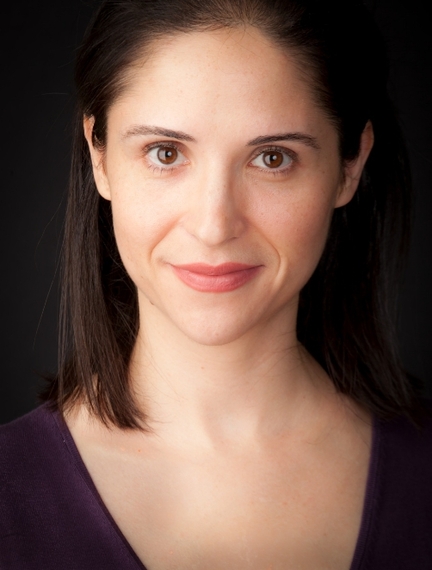 From the humor standpoint, having performed comedy at Upright Citizens Brigade, how much did the training from that, and from television, and your years of doing comedy inform doing a book?

I think, very much. It's just my voice as a human. It's just who I am. Normally what I write is to perform, but I've always written fiction on the side, as a hobby. So this is just my first time putting it out there. But in any genre, my main jam is my voice, which is humorous by necessity: it's just how I deal with life.

How did you lay this thing out? It must have been all over your house!

(sighs) It was all over my house, Gregory -- writing it came very joyously and naturally. The structuring was very difficult. It was hard, it was like a mathematical puzzle -- but the voice was always the same.

Once again: the voice.

I loved turning it into 'Choose Your Own Adventure,' because I love the theme -- doing it grown-up style, I got to look at underlying themes of what that means, about agency, and how much free will we have over things, and how our choices create who we are. Because in this book, the protagonist definitely changes, depending on what choices you make -- but also, because it started out as other stories, I think it takes some unusual, more fun twists and turns than maybe I would have conceived of -- it had the benefit of going in some weird directions.

Like that threesome-mermaid story was actually a magic-realism story. So I had to finagle it to work here. I like the question of what you would do to satisfy your husband, or keep him from straying.

Well, this is coming up a lot these days, with the Bechdel test, and the entertainment industry still being male-dominated -- and now the Messiah transforming the world is the lead female of Star Wars, because we've never seen a kick-ass girl before! But that issue is a big issue, and from the other side of the gender gap, if there is one -- I don't know how 'binary' you are...

I was a Women's Studies major at Berkeley, so the very word 'binary' sends chills of terror down my spine.

(laughs) Okay. I'm trying to be hip. In the portraiture of the males in the book, how did you deliberate how you would present them?

I certainly thought about it. There's some sort of fun with revenge-objectification -- but that's not the main current. Just the occasional dollop of Brad Pitt in Thelma and Louise, just for fun. I don't think that's a way out of inequality, to turn everybody into brainless sex objects. I think it flowed naturally from my real experience, where, like, dating: there's a lot of doozies. I'm sure men feel the same way. But at the core, there are some really good, decent dudes -- in the book -- and sometimes she, the protagonist, will mess that up. So is it horrible if I say it kind of felt accurate to me?

I don't think that's horrible; going for accuracy is admirable.

No, I just mean, you think: 'What?! You think this is accurate? These men are horrible.'

I just think the protagonist runs the gamut. To me, so much of movies, TV, and books are sexist -- whatever word you want to say -- just because there's no complexity. It's not like somebody set out to write lame women; it's just often not coming from a complex worldview. So I try to do justice to a complex world, in which men have their troubles, too, and I tried to highlight some of them: how we expect them to be sensitive and empathic, and gluten-free -- yet still dominant. We're still tethered to outdated notions while surging into the future, and I think expectations are really high on everybody.

Is there a line that you feel you have to walk, when you are being witty, and bringing forth all the foibles and strange qualities of human nature, and also instilling it with authenticity? Like, do you check youself, and go, 'That's a little bit too caricatured...'

I think it's more the reverse: I feel like I'm hopelessly authentic, and then I'm like: 'Wait -- let's layer the funny back in. Let's push the envelope more.' I'm so happy about what's happening in the landscape: that Feminism is allowed to be hilarious now, and talking about women's struggles is funny. All those amazing trailblazers: Tina Fey, and Amy Poehler, and Amy Schumer made all this stuff ripe for comedy, so that is an opportunity: I want to get on that blazed trail, and live it up!

That's cool. And I also understand that the book has been optioned. So how's that going?

Yes, it's going great! I don't know how much I'm allowed to say about that. I've gone to a lot of very fancy meetings -- but I'm still buying groceries at Trader Joe's.

I hope I always buy groceries at Trader Joe's -- that's the high-water mark for me. I don't want to move up to Gelson's.

(laughs) That's a whole new thing: you have to have different shoes, get your hair blown out. The requirements are much steeper.

The end of one of the stories seems really fitting, because it proves quite universal, where you say you hope for the best, but in the end, it's up to your brain. I love that. Where did that come from?

That's one of the key themes of the whole thing: How much we can change, and how much is wiring? Even though ostensibly the book is about you, the protagonist, finding love, it really is supposed to be about the journey to figure out who you are in the world, and who you want to be. I'm always thinking about: 'What do I need to accept about myself? And what can I change?' There's so much that can't be controlled. That was what was fun to look at through the 'Choose Your Own Adventure' lens: you get the thrill of the do-over, but even then, life may end up surprising you. 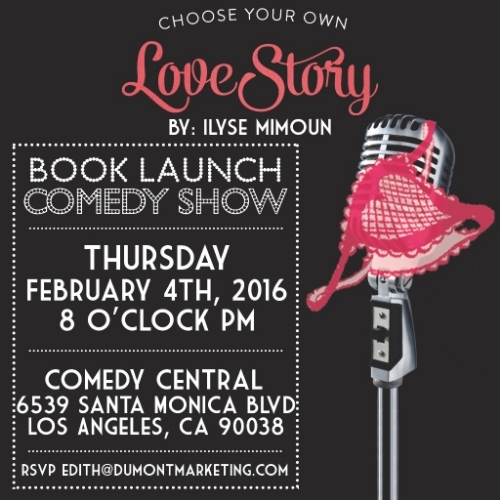