Crowd assembled in front of the Supreme Court of the United States in Washington, DC on Friday, June 26, 2015
(commons.wikimedia.org Matt Popovich)

Last week, in a landmark opinion, the US Supreme Court ruled that same-sex couples would be allowed to marry in all fifty states. And that banning them would violate the 14th Amendment of the federal Constitution. It was a historic victory for gay rights advocates, and immediately there was both dancing in the streets and weddings in the chapels.

However, before the digital ink was dry on the press releases, a chorus of protests rose up by those who opposed the decision, mainly from evangelical Christians. Some of the comments were strongly worded and ominous. Many of them, like TV evangelist, Pat Robertson, said that because of this decision, there will be a national wave of persecutions of Christians. Christians will now be hunted down and raped by mobs of gay people, he said. They will be "the victims of vicious, vicious attacks," just like the angels who visited Sodom were nearly raped by "virulent homosexuals." Franklin Graham, president of the Billy Graham Evangelistic Association, told Fox News that the Supreme Court has knowingly chosen to reject biblical truths and endorsed sin instead. "This court is endorsing sin," he said, "That's what homosexuality is--a sin against God...I believe God could bring judgment upon America." California megachurch pastor Greg Laurie told his flock that the decision was an "attack on the Bible," a sign of the end times coming, and that dire "Bible prophecies are being fulfilled before our very eyes." And the Rev. Samuel Rodriguez, of the New Season Christian Worship Center, says the decision "serves as a de facto and legal catalyst for the marginalization of Americans who embrace a biblical worldview."

When I hear of my brothers and sisters in the faith protesting full equality for gay people in the name of the Bible, it breaks my heart. It reminds me of that fake booklet that was going around a few years ago. On the cover were the words, "Open This to Read Everything Jesus Ever said About Homosexuality."

And, of course, if you opened it up, it was blank, absolutely blank.

It's true. Jesus never said a single word about gays or lesbians or same-sex marriage, or any of the other social issues that so many people seem to be possessed with fighting today.

There are, of course, other places in the Bible that talk about various forms of same-gender coupling. The Apostle Paul, for example, in one of his letters, condemned a particularly horrendous practice in ancient Rome where an older rich male would take in a young boy and have him castrated and then use him as a sex toy. Well, I don't think gay marriage advocates would approve of that either.

And then there are the famous passages in Leviticus 18 and 20, that are often used by people to excoriate gays. Chapter 18 says that it is an "abomination" if a man "lies" with someone who is "of his own flesh," or neighbors, or animals, or another man. Then chapter 20 says that if a male is caught doing any of those things, then all of them--men, women, and the pet dog--should all be taken to the edge of town and killed, some by fire, some with rocks. Um, in our most intense religious moments, I don't think most of us would want to enact those biblical provisions into law.

There are two or three other passages (that's right, only two or three out of 31,173) that deal even remotely with anything we could call homosexuality, but even if every single one was an outright, clear, condemnation of gay rights or gay marriage, it still seems hard to argue that this issue has any real importance in the Bible. Until people started tediously scouring through the texts looking for those random verses that might prove their conviction that gays were sinful, I don't think anyone had ever given it any thought. In fact, a quick perusal of my eighteenth and nineteenth century commentaries on these hot button verses shows nothing. No one, until recently, ever thought that the Bible had any stance on the subject. No one tried to dig out those verses to prove that the Bible was opposed to gay rights or gay "lifestyle" or gay marriage.

Now, it's not as though Jesus didn't have strong opinions on other things. He railed against people who were wealthy or powerful, or who oppressed the poor, the sick and the weak. And more. But he never said a word about the two retired women in a church I used to serve who met playing bridge and fell in love and then wanted to seal their love in holy matrimony.

He talked a lot about welcoming in those who were --as we might say today--"marginalized," that is, foreigners, lepers, the sick, the poor, and even women (men were not supposed to talk to women, though Jesus often did). But he never said anything about two young men who meet in college and fall in love but can never tell anyone because their church has told them that their love was a sin.

Jesus' sense of radical openness to all kinds of people was very controversial in his day and unfortunately it still is today. He told us to go out into the highways and byways and bring in the kinds of people (that most of us would not want to have in our family) and to offer them a seat at our table. In fact, that attitude of his was probably one of the things that got him killed. And following in his footsteps today isn't easy.

We hear Pat Robertson, or Franklin Graham, or many others, call for a constitutional amendment to deny the Supreme Court the authority to make rulings on social issues. They say it's right and just (and should be legal) to exclude whole groups of people from ever getting married.

I don't know where they're going with that, but it makes me say, I'm going with Jesus

When someone like Donald Trump says that two men getting married violates the meaning of traditional marriage, but his own three wives and multiple affairs does not, I'm going with Jesus.

When I hear politicians -- most of whom are either Christians or at least religious -- say that it's legal for Britney Spears (remember her?) to have a one-day marriage because she went to Las Vegas and woke up married, but that we need to re-write the constitution to protect us from the two gay guys who lived across the street from my mother and took care of her when she was old and sick, I think I'm going with Jesus.

When the chips are down and the going gets rough, and people are claiming that we need to protect ourselves from a dangerous wave of tolerance, and openness, and acceptance, I think I'm going with Jesus.

And I think that going with Jesus -- that is, "being a Christian" -- means that I really have to support same-sex marriage. 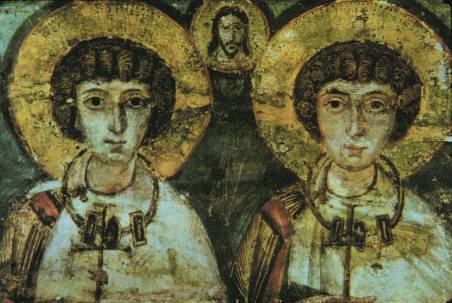 Saints Sergius and Bacchus, 7th Century Christians. Thought by Yale historian John Boswell to be an example of an early Christian same-sex union (with Jesus in the center as officiant) reflective of tolerant early Christians attitudes toward homosexuality.
(Public domain en.wikipedia.org/wiki/Sergius_and_Bacchus)