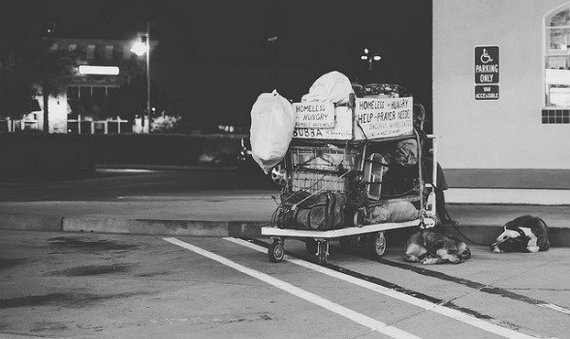 There is one thing I've never admitted publicly... I'm a high school dropout.

That is one of the hardest sentences I've ever written. Tears are hitting my fingers as I write these words. I feel so ashamed, and because of this, I've questioned who I am to give anyone advice. For 12 years this held me back from my dream of writing.

I was just another statistic. A young black man who dropped out of high school, living on the streets and doing whatever he could to survive.

I grew up in a deeply religious home. We didn't watch TV growing up; we weren't allowed to listen to music or date. When I turned 17, I had enough. My parents told me if I didn't follow their rules, I had to get out of their home. I did.

I was homeless for six-months. I lived on the street and friend's couches. I went to high school for a while, but I had to work as much as possible to get off the streets. I left high school to survive. I did some things I'm not very proud of to survive.

I eventually got my act together and married an amazing woman. The first thing she did was encourage me to get my G.E.D., which I did. Still, I couldn't write because I felt like an imposter.

It's sad to say, but it took the death of my father in April of 2012 to shake me out of my comfort zone. My last promise to him was that I would learn from his mistakes by not living a life of regret.

My best friends told me to ignore the naysayers and do what they knew I was called to do on this earth. I started a new blog. I stopped focusing on the haters; I realized that I'm not doing this for them. I started writing to connect with, and help those who are struggling with the same issues as me. I poured my heart into helping them. I ignored the racist comments that would pour in on a weekly basis. I realized those people were reflecting a problem inside them self.

It took three years, and a lot of learning/implementing, but at the end of 2012, I was able to quit a job that negatively affected my life. I was finally free. It took three years to realize that it didn't matter what my skin color was, I could write and people would listen. My advice helped people.

After the day job was history, I started to heal and work on my weight. I've lost 170 pounds and counting. The last piece of the dream triad was where we lived. We were scared of the rising crime in Milwaukee, Wisconsin. In 2010, we vacationed in Maui, Hawaii and fell in love. After four years of planning, we made the move to Maui in April of 2014.

It's possible for you

I'm a high school dropout who self-published two books that have sold over 86,000 copies. My first traditionally published book came out in May of 2013 and it is now a Publishers Weekly, iBook's, and Amazon #1 bestseller in ten categories.

I'm a high school dropout who ignored what society says about high school dropouts. I'm not good at grammar; I'm constantly struggling with feeling like a "bread man" and an imposter. I still deal with many haters who are quick to point out my every flaw. I deal with racist comments and email. I don't have it all together at times, but I'm living my dream anyways. I busted my butt and now I'm living a life of true freedom in my work, health, and relationships.

Life is hard and dreams take time, it's actually easier if you don't chase them. Here's the thing though, life is short and time is the one thing we'll never get back.

It may take years. It may require sacrifice. It may mean losing relationships. Despite the struggle, it's worth it. I did it. If you decide you want more from your life, it's possible for you.

Don't let anyone convince you your dreams aren't possible no matter what your skin color is.

This article originally appeared on KimanziConstable.com.