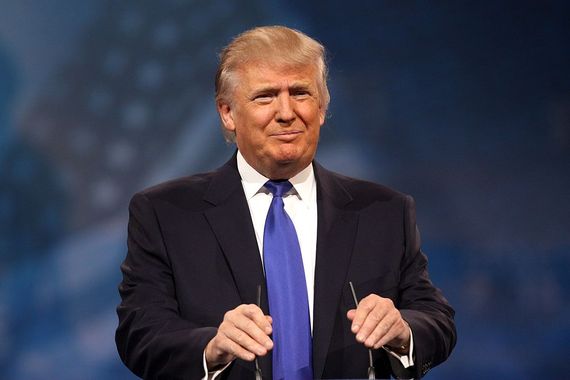 I’m a Republican, and I’m not voting for Donald Trump.

As a moderate conservative, I can’t bring myself to pull the lever for Donald Trump. As a matter of fact, the thought of voting for him is so odious that I couldn’t even hold my nose to vote for him just to stop Hillary Clinton from becoming president.

The stench is much too strong.

The fact that Trump was even nominated is concerning to me. It makes me question where the GOP is going, and what it means for our nation. .

I’m very much against HIllary Clinton. But I don’t believe that Trump is an acceptable alternative. I’m not really sure who’s worse, but I’d rather stand with my principles and vote for someone who I stomach. It may not be a popular sentiment...most people just vote for the “lesser of two evils.”

But that’s frustrating to me and I can’t bring myself to do it. It’s one thing to vote for someone who just isn’t your first choice. It’s another thing altogether to have to choose between an extremely corrupt career politician and a populist demagogue with no political experience.

In this post, I will discuss the reasons I’m choosing not to vote for Donald Trump. I’ll also discuss what I believe this election means for modern masculinity.

How Trump Has Alienated Many in the GOP

As you probably already know, Donald Trump has managed to alienate most of the nation. No big surprise there, right?

But he’s also alienated many in the Republican party. In this post, I'll discuss some of the main reasons I and many other Republicans aren’t voting for this candidate. .

Donald Trump is a racist demagogue.

Now, I don’t use the word “racist” lightly because I think people are too quick to erroneously label people they don’t like with this term. As a matter of fact, I was even hesitant to use this term to describe Trump. However, when I look at the evidence, it’s hard to avoid it.

I don’t agree with illegal immigration. I think we need to do something to minimize it. But the reasons why have nothing to do with the race of those who are illegally entering this country.

Those who are coming into this country are hard-working people who wish to make a life for themselves. Yes, they are breaking the law but they are not the dangerous criminals who come to this country to victimize innocent Americans.

There were also the comments he made about Judge Gonzalo Curiel. His implication that Curiel wouldn’t be fit to judge Trump’s lawsuit fairly because of his heritage further shows Trump’s ignorance and prejudice.

Finally, Trump’s treatment of black tenants who wanted to rent space in one of his buildings shows how he feels about black people. In 1973, the Department of Justice filed a lawsuit against Trump because he was discriminating against black prospective tenants.

It was shown that they separated black prospects out by attaching a piece of paper to their application. The piece of paper was marked “C” for “colored.” As a black man, I have trouble voting for a President that would judge me on the color of my skin.

We all have prejudices, right? None of us are perfect in this regard. But in Mr. Trump’s case, the issues seem to go far beyond run-of-the-mill unconscious bias. As a nation, we’re supposed to be better than this, and I’m troubled by the fact that someone who clearly has racial issues can become a Presidential nominee.

He's Not Really a Conservative

I can’t blame people for making that mistake. But that’s what it is: a mistake.

Donald Trump is not a conservative. He’s a leftist who became a Republican five minutes ago and pretends to have conservative leanings. Determining Trump’s stances on most issues can be a chore since he regularly changes his positions whenever it suits him, but here are a few that stand out to me.

Because Trump can’t seem to stay consistent with his positions. This is problematic for me. Even if he were to adopt a position that I agree with, I can’t truly be sure that he really means what he says. If I can’t have a reasonably good idea of what positions a candidate holds, I can’t vote for him.

Donald Trump acts like a petulant child. He never admits when he’s wrong, and he has a childish impulse to lash out at anyone who dares to say anything negative about him.

Remember when his former campaign manager Corey Lewandowski was caught on video getting physically aggressive with a reporter? It was a huge fiasco. All the Trump campaign had to do was apologize. It really could have been that easy.

Instead, they smeared Michelle Fields and even implied that she made the whole thing up, even though it clearly happened. It was jaw-droppingly stupid. But it’s Trumpism at its finest, isn’t it?

Whenever Trump gets called out for making a gaffe he pretends as if it’s just a case of unfair media bias. The sad thing about this is that the media is clearly unfairly biased against Republicans, but Trump makes it so easy for them..

When it comes to dealing with his critics, Trump takes things to an unnecessary extreme. Now, I completely understand the need for someone to defend themselves. The problem with Trump is that he doesn’t know how to choose his battles.

Anytime someone says something unkind about him, he just has to respond in kind. This makes sense when you’re responding to your opponent. It doesn’t make sense if it’s a Gold Star family. The way he conducted himself with the Khans was horrendous. It was also classic Trump.

He’s the most thin-skinned Presidential candidate I’ve ever seen.

Not only is this off putting, it makes me concerned about his ability to lead. Can you imagine having a hypersensitive bully as the commander-in-chief of our military?

He Lacks the Knowledge Necessary to be President

Donald Trump has demonstrated a serious lack of knowledge on the issues. Even in the times I’ve agreed with his diagnosis of a particular issue, I’ve disagreed with the solutions he’s proposed.

It’s not very likely that Trump will even be able to build the wall he’s promising. Even if he could, it’s not likely to be effective at limiting illegal immigration. Not only that, it may cost more than it’s worth. And as we have already heard from Mexican President Enrique Pena Nieto, Mexico’s not going to pay for it.

Then, there’s Islamic terrorism. It’s obvious that terrorism is a threat that must be taken seriously. I do believe we need to do something about Islamic terrorist groups like ISIS. We need to find a way to halt the spread of their ideology.

But the idea that banning all Muslims from entering the country will actually protect us is ignorant and short sighted. A blanket ban isn’t going to solve this problem, and could even make it worse.

Now, I understand that Trump recently started backing off of the ban (supposedly), but the fact that he suggested it in the first place is concerning. And then, of course, there’s also the possibility that Trump could change his mind again and go back to pushing a ban on all Muslims. He doesn’t seem to have a good grasp on this issue.

Free trade is what makes the products we buy more affordable. If we were to stop trading with other nations, it would hurt regular folks like you and I because we would have to pay much more for the things we buy every day.

Not only that, restricting free trade limits our freedoms to buy what we want. If I don’t want to buy an American car, my government shouldn’t force me to by restricting what I can buy from another country. Trump says free trade is destroying American jobs. Actually, it doesn’t. As a matter of fact, free trade can actually add more jobs.

I don’t believe Trump has the temperament, or the knowledge necessary to be an effective President.

Modern Masculinity and the 2016 Presidential Election

To me, masculinity means voting your conscience, regardless what society expects you to do. It means not being afraid to go against the grain and think for yourself. I don’t believe in either of our candidates, which is why I can’t vote for them. I’ve done the work. I’ve done the research, and I’ve found them both wanting.

I refuse to limit my choices to a corrupt career politician and a boorish con man. Do I know who I’m going to vote for? Not yet.

But here’s the thing.

To me, that wouldn’t be masculine. It would be cowardly, lazy, or both. Instead, I’m choosing to make my own decision based on what’s available to me. I may not get the candidate I want, but I can still choose to use my vote in a way that I can be proud of.

I think the modern man needs to use his own brain. Examine the facts. Think critically about your choices. These decisions are too important to be made based solely on what everyone else is telling you. Perhaps if more of us did this, we can stop finding ourselves in a position where we have to choose between the lesser of two evils.

Jeff Charles is the founder of Artisan Owl Media, an Austin-based content and online marketing agency that helps that specializes in helping entrepreneurs earn more clients and grow their audience by becoming better influencers. Check out his blog for actionable tips on influence, persuasion, sales, and marketing.