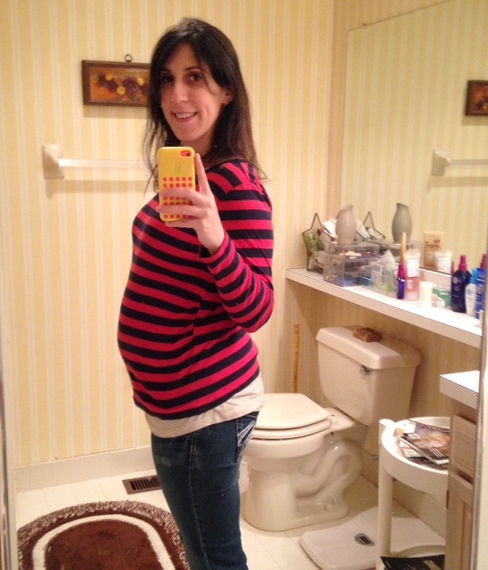 I recently "came out" with my pregnancy as a single mother by choice (SMBC) on Facebook, and I was surprised that the most common reaction to my post was "You're a badass!" or "You're so amazing!," or messages from people telling me I was brave. Because when I posted it at 12 weeks, I was feeling anything but.

I still don't feel brave. In fact, in the weeks before I posted my announcement, I struggled with horrible anxiety about telling my family and friends, wondering if everyone would look down on me. I had debilitating nausea and fatigue since week six, and more than once, contemplated abortion. I wondered how I was really going to do this, with bills and astronomical grad student loans that I very slowly chip away at, and the ever-rising cost of health insurance (ACA? Um, right). I slogged through depression that has plagued me on and off throughout my life, and wondered if I would be a good mother. I was terrified of letting my family down, since I knew they had always pictured me married when I announced a pregnancy.

Because here's the real story: it wasn't bravery that led me to making this choice. In fact, it felt a lot like fear and desperation. Perhaps those are the wrong words, but those are the two that come to mind. What I didn't post on Facebook was the diagnosis of diminished ovarian reserve that I got at the age of 34. Faced with the very real news that my fertility was abysmal, and if I waited another year or more, I would likely need to do IVF (with donor eggs, probably), I knew I didn't have the tens of thousands of dollars to do that. So though the timing was not ideal, and not what I'd ever planned or had in mind, my timeline was moved up.

Despite being a feminist, my bare ring finger on my left hand feels very conspicuous when I am shopping for maternity clothes at Motherhood Maternity or when registering at a baby store. At the perinatologist, I joked about the baby being stubborn and not wanting to move to get the nuchal fold measurement, and the ultrasound tech asked whether the baby took after me or "daddy." I explained that I used a donor, and she fell silent. And then asked me what I did for a living, and why I moved from New York. Her questions continued until she asked me where I had gone to grad school -- which finally seemed to satisfy her. The pregnancy app, the doula advertisements and the baby magazines all assume a two-parent household -- single mothers, let alone SMBC's, are largely ignored. At least that's how it feels. I don't feel brave most days. Instead, it's a fight not to feel foolish, or like I'm in over my head. None of this sounds very brave or "badass" to me.

I don't say any of this for pity or to feel sorry for myself -- pity is a useless emotion, and I knew full well what I was doing and that it wouldn't be easy. I have sought out Facebook groups of single moms, as well as like-minded mom communities. I have support from friends and family. But it's not about being brave -- it was about wanting to stop feeling like a childless mother, and take the next step before I ran out of time.

Wrapped up in all of this is the privilege that I know I have -- race, class, age. My perinatologist appointment had its rough spots, but it might have been even harder if I had been 20, not white, and had only a high school education. My doctor's visits might be different if I didn't have insurance, or if I had Medicaid. If I were unemployed, I may not have received the same warm response on Facebook. I would most certainly be judged in public. I keep all of this in mind, because to me, the "badass" single moms are the ones working two and three jobs to keep their families afloat. They're the ones who may not have any family or social support, but are still managing to survive and thrive.

So thank you, for the kind words -- I appreciate it, and it's nice to read during challenging times (like every other day). But in reality, I'm just taking things one minute at a time, swallowing my fear and pasting on a smile.

More from Mommy Nearest:
7 Struggles Single Parents Face (And How to Manage)
I'm the Second Favorite Parent--And That's Okay
I Never Thought I'd Love Being a Stay at Home Mom...But I Do

This piece was originally published by Jaime Herndon on Mommy Nearest. Jaime is a writer living in New Jersey after leaving the wilds of New York City and is expecting her first child in May 2016. Her book, Taking Back Birth, from Microcosm Publishing, is also forthcoming in 2016. You can also follow her on Twitter at @IvyTarHeelJaime.