He was adopted by a white family and seemingly raised with love and affection. He's had a fantastic career playing football, from the little leagues to the big league. Even so, the athlete hasn't forgotten his roots. He's vocal on his social media pages, which drip with support for the Black Lives Matter movement and against racial inequality.

So it shouldn't have been a surprise that before his pre-season debut on Friday against the Packers, from Green Bay, Wisconsin -- about 120 miles north from where he was born in Milwaukee to a destitute mother and a father he doesn't know and a city that just descended into riots after decades of tension when another black man died at the hands of Milwaukee police -- he finally took a stand, or, seat, rather, during the National Anthem. 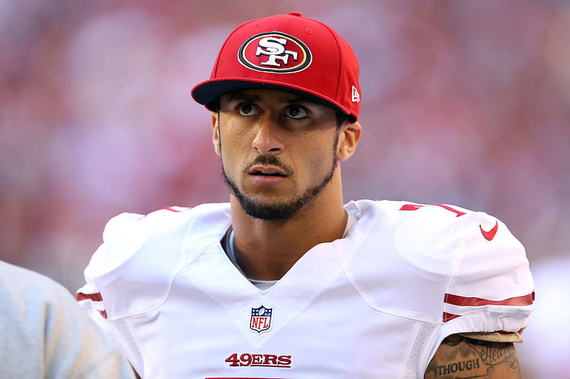 In a nearly 20-minute press conference after the game, Kaepernick said that he would not stand for the national anthem because of the oppression that's happening currently here in America. He made the point that when it comes to criminal justice in America, there are two Americas.

"To me, this is bigger than football and it would be selfish on my part to look the other way. There are bodies in the street and people getting paid leave and getting away with murder," he said to reporters.

Naturally, Americans paused to consider his point and his perspective -- nah, just kidding. People lost their shit. Some sports analysts (perhaps rightly) pointed out that with Kaepernick's poor on-field performance of late, this creates the kind of "distraction" that could lead to him being cut for "football reasons." (Wink, nudge, et al.)

Others were less diplomatic in their criticisms. Fans burned his jersey in videos posted on social media. Former Republican Congressman from Florida and notable political crank Allen B. West called Kaepernick spoiled and warned "there are consequences to your ignorant action."

David Hookstead of right-wing site Daily Caller said that Kaepernick "disrespected all of America when he refused to stand for the national anthem." Veterans also criticized Kaepernick, including some active duty servicemembers who told the 28-year-old to sign up for military service.

However you feel about Kaepernick's protests, from his choice of what to do to his reason for doing it, one thing can't be denied: what he did is actually the most quintessentially American thing ever.

Of course, we all know that the First Amendment gives him the right to protest this way (though he did earn a rebuke from the White House Press Secretary). But his decision to remain seated being as American as it gets goes deeper than that.

It's hard to pinpoint exactly when the American revolution began. Some think it was the Boston Massacre in 1770, others think it was that city's famous Tea Party that happened three years later. Me? I think it was it was when the members of the Continental Congress drafted a very important declaration to the King. No, not the Declaration of Independence, but it's predecessor the Declaration of Rights and Grievances drafted by Philadelphia delegate John Dickinson and signed in 1774.

Up until then, Americans were still down to be British citizens, they just didn't like that they had no power to represent their interests in the parliament. The response from the Crown, for daring to complain about the government, was to effectively sign their death warrants.

This is why Colin Kaepernick's protest is the most American thing ever -- and he's not the first one to make such a statement.

The irony of the controversy is that people are mad at an athlete protesting racial oppression in America in the same year they spent talking about what a Star-Spangled Hero Muhammed Ali was.

The famous boxer, who was given constant shade from White America for changing his name from Cassius Clay to Muhammed Ali, was drafted for the Vietnam War and refused to go.

"Why should they ask me to put on a uniform and go 10,000 miles from home and drop bombs and bullets on brown people in Vietnam while so-called Negro people in Louisville are treated like dogs and denied simple human rights?" Ali said to the Houston Chronicle.

He was the greatest boxer in the world and a sports personality like none had ever seen before, brash and bold. It was all in good fun when he was trash-talking Hendrick Cooper, Joe Frazier, or George Foreman, but another thing when his verbal target was the government of the United States of America.

Ali was well-off, but by no means did he have what passed for "fuck you" money back then. He was unable to travel for fights, was stripped of his titles, and made ends meet on the speaking circuit or borrowing money from friends.

His popularity took a hit, especially amongst "white America" with Ali facing angry white challengers during his campus speeches. His friends and compatriots distanced themselves from him out of a sense of self-preservation. Still, he had the attention of the anti-War movement in the country (arguably a similar movement in reception and scope to Black Lives Matter.)

The right we have to protest the government, refuse to participate in the national anthem or Pledge of Allegiance, to go to political events and scream nonsense obscenities at our elected leaders is a miracle.

This list of complaints our ancestors made against the British government to the King got the entire Congress labeled as traitors and marked for the hangman's noose. Like Kaepernick, they were a bunch of rich guys who were doing well in society-as-it-was, and they went out on a limb for those without power...and that limb snapped in two.

The Declaration of the Congress Held at New York represents the beginning of intellectual independence from Britain. Although the Stamp Act Congress wrote the declaration with the intention of gaining rights as British citizens and proclaiming their loyalty to the King, the Congress was the first organized American political body to directly challenge British authority, making its declaration a vital document in the history of American freedom.

After this moment in history, there was no going back. Simply believing that you had the right to raise grievances with those in power was what turned a nation of British colonists into a new land full of troublemakers.

Protest is in the constitution our forefathers drafted long before Ali and after their own condemnation of government power. So when people say that men and women died for our freedom, they're right, having the ability to be critical of the country included.

When I took the oath that every military service member takes upon enlistment, I did not swear to "protect and defend" the national anthem or the flag or the Statue of Liberty, long may she stand.

No, I swore to uphold the U.S. Constitution which was the first official government documents in the world to recognize that the people had a right to say whatever kind of brilliant, imaginative, funny, offensive, or angry shit they wanted to. It is no accident that the first rights of the people stated in the Constitution is that they elect their own leaders, who can't do anything to them for expressing their mind.

Yet, as Kaepernick points out, that freedom is still unequally applied across America. For years, the Department of Justice finds that police force after police force employ racially discriminatory policies in their efforts to uphold the law.

As a man with a national platform (for now), Kaepernick caught the attention of the press in a year when all eyes are on the presidential race.

Americans are something of a reactionary people. We can easily be distracted, but nothing focuses us like a good controversy. Like sports themselves, you can pick a side and root for someone's success or downfall. Right now the focus is on Kaepernick.

What will make this protest a Super-Bowl-sized win for his cause is if it leads to something more. Perhaps others in the league and in the stands will join him in staying seated. Perhaps that will lead to more coverage of the outrage. But eventually, if it keeps going, we'll have to dig into the actual issues they are protesting. Something that will be much tougher than this debate.

For now, Americans have someone to cheer (or jeer), and when it comes to sports that's often all we want. Thankfully, we have the right to choose a side.