I'm a writer, a mother, a grandmother, and a woman in love with a woman. But don't call me a lesbian -- not because I find it offensive, but because it's not true of me.

I know. I know. People like me and New York City's soon-to-be first lady can be confusing. Chirlane McCray made headlines during her husband Bill De Blasio's mayoral campaign because she wrote about being an out and proud black lesbian in an essay that ran in the September 1979 issue of Essence magazine.

Someone named "Czar of Truth" summed up the confusion that some are feeling around McCray's sexuality in his/her comment under a HuffPost Live interview with McCray:

OK. She was a lesbian and "switched" to the other orientation. Or is still a lesbian who married a male. Sounds very confusing because I'm told that choicing ones sexuality isn't possible. That you can not be reprogrammed sort of speak. So which is it?

Apparently Czar of Truth wasn't helped by McCray's own explanation -- that she was able to go from coming out as a lesbian to falling in love with her future husband by "putting aside the assumptions I had about the form and package my love would come in."

For many it's puzzling that McCray resists labels. In a June 2013 Essence magazine interview, McCray responded this way when asked if she considers herself bisexual:

I am more than just a label. Why are people so driven to labeling where we fall on the sexual spectrum? Labels put people in boxes, and those boxes are shaped like coffins. ... As my friend Vanessa says, "It's not whom you love; it's that you love."

I understand where McCray and her friend Vanessa are coming from. I also understand why people like Czar of Truth are perplexed.

I'm a 50-year-old white mother of two adult children, twice married to men, who has been in a relationship with an African-American woman for nearly two years. Like McCray, I don't identify as bisexual. I also don't identify as a lesbian, even though I prefer sex with women to sex with men. When my girlfriend's daughter asked me how I identify, I paused and said, "I'm a woman in love with your mama." 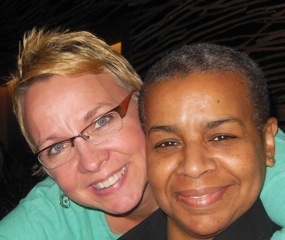 I know, Czar of Truth. I'm not helping.

My second marriage imploded after I admitted (again) the strong desire to be with a woman. Since my divorce, I've been my own research project. I've been excavating my past, looking for clues -- some moment in junior high school when I perhaps ogled some girl in the locker room, some moment I could point to and say, "There! Right there! That's when you should have known!" But that hasn't happened. After two years of exploration, I've simply arrived at this: I've deeply loved two men and two women.

In 2009, while watching TV in the bed I shared with my second husband, I saw an interview with Lisa Diamond about her book Sexual Fluidity: Understanding Women's Love and Desire. In it Diamond, an associate professor of psychology and gender studies at the University of Utah, shares a study that shows that many women experience a fluid sexual desire, responsive to a person rather than a specific gender. When I heard Diamond's findings, I wanted to jump on the bed and shout, "That's me! That's me!"

But I have found that people -- gay and straight, men and women -- want me to choose an identity. "You owe it to your ex-husbands. You owe it to your girlfriend," one friend angrily replied when I said a label didn't matter. Labels, she contends, are useful in a society that needs to have laws and make accommodations for marriage, employment rights, etc. My friend wondered why I'm resistant to a label around my sexuality, but I have no problem accepting labels like "woman," "native Iowan," "mother" and "grandmother."

"Why are labels like 'bisexual' and 'queer' not useful?" she pushed. "They seem to describe the gray area in between. They're non-binary. They both admit to a larger complexity. So what's wrong with them?"

Good questions to which I have yet to arrive at any clear answers.

When asked in that HuffPost interview how she explains her sexuality, McCray answered, "Why should I explain my sexuality?" followed by, "I don't know what I'll be like next year or 10 years from now. ... People grow and change, and some people are more risk taking than others."

While at the moment, I can't imagine kissing the hairy neck of a man or being in bed with a real penis again, I also can't call myself a lesbian. I know that's confusing to people like Czar of Truth. I do believe, as McCray says, that people grow and change, and, yes, I believe that's true of our sexuality. I don't know if I'm more of a risk taker than others. I do know it takes courage to live a life that most can't quite put a finger on.

So, to answer your question, Czar of Truth, I think we love whom we love, and that who we love doesn't always make sense -- to those around us and sometimes to ourselves. I think there are people who are most definitely gay, and yes, I believe they were born that way and have no choice in the matter. And then there are people like me, whatever we are. I don't yet have a pat label for that, but I can sum it up in five words: a human being who loves.