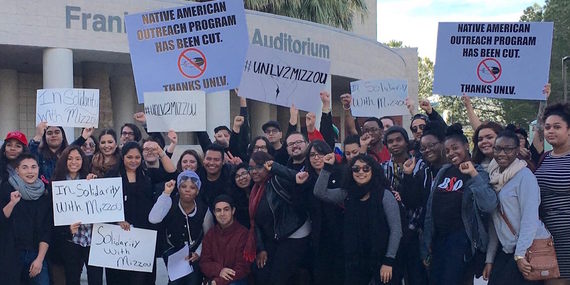 Another generation of college students are realizing their power after University of Missouri students, including football players and faculty members, used various forms of protest to force the resignations of both their president and chancellor.

Since then, students across the nation have organized and participated in demonstrations that stand in solidarity with the University of Missouri (Mizzou) against racial injustice and other forms of discrimination. One of these rallies took place at the University of Nevada at Las Vegas (UNLV), where students shared their personal experiences with university officials.

"I'm a working class mujer," said UNLV student Desiré Gálvez, as she spoke openly about her life at a recent university town hall meeting. In a few brief words, Gálvez seamlessly captured the intersectional struggles that many college students face around issues of class, race, and gender. Gálvez, along with other students, shared their individual stories to reveal how systematic discriminations operate in society.

From California to Missouri to New York, structural oppression exists in every educational institution across the United States. It cannot be placed on a handful of people making prejudiced comments or simply pinned on outwardly racist, sexist, classist or homophobic actions. Systematic oppression is reflected in both the explicit actions of some and the implicit actions of many, which include those who stand idly by and refuse to listen to the voices of our students.

Colleges and universities must create safe and welcoming environments for their students. In order to accomplish this, every university president, college administrator, and educator needs to better understand what institutional oppression means for women, low-income, students of color, disabled, LGBTQIA, and other marginalized groups.

"Latinas don't have the DNA to be successful."

While people certainly have the First Amendment right to use prejudiced speech that reflects their intolerance of others, discriminatory language aimed at marginalized groups are symbolic acts of violence that often precede or coincide with physical acts of violence.

To understand systematic or structural discrimination, one must see that words reflect ideas, and that ideas influence people's actions. This is also why it is problematic when top officials hold bigoted beliefs at any institution.

Take San Jose State University for example, when last year an official in charge of millions of dollars in university endowment and scholarship money commented that "little Latinas don't have the DNA to be successful." The problem was magnified when university administrators who sat in the same room ignored the comments and did little to address the issue afterwards.

After a San Jose State University professor filed a formal complaint and students rallied to bring awareness to the damaging remarks, the official who made the comments and another top administrator in the conversation were forced to turn in their resignations. These types of ideas are not isolated and reflect a larger history of discriminatory sentiment in the United States:

To incorporate Mexico [and Mexicans into the U.S.], would be the very first instance of the kind of incorporating an Indian race; for more than half of the Mexicans are Indians, and the other is composed chiefly of mixed tribes. I protest against such a union as that! Ours, sir, is the Government of a white race.

U.S. Senator John C. Calhoun spoke these words to dissuade U.S. Congress from annexing Mexico in 1848. Unfortunately, similar ideas are expressed in the sentiments in our political debates of 2015 -- where currently a mix of racism, nativism and xenophobia continue to push many of our nation's representatives to take extreme political positions against Latinos and Muslims. This same type of discrimination is also present in our educational systems.

Students that Break the Mold

Every year on college campuses, there are a number of culturally disrespectful Halloween costumes, "ghetto parties" that mock impoverished people of color, rampant sexual assault, and a slew of other everyday incidents that both minimize and terrorize women, LGBTQIA, and other marginalized students. Much of this falls back on parents and K-12 systems that inadequately address issues of race, class, gender and sexuality before students get to college.

Still, many university officials have been dismissive when it comes to addressing issues of discrimination on college campuses. At times, they further perpetrate actions that degrade their students (see University of Louisville president, his wife, and staff who donned mock-Mexican costumes for a party and newspaper photo shoot a few weeks ago). Top administrators in higher education need to be able to handle these situations with solutions that match their six-figure pay grades.

Another case in point: Last month Lisette Espinosa wrote a critical editorial about the difficulties of being a low-income Latina student at Claremont McKenna College (CMC) in California. She emailed the CMC Dean of Students with her article and the dean responded that the college was working on better ways to serve students "who don't fit our CMC mold."

What exactly is the college mold and who fits it?

Most U.S. colleges and universities were originally built to cater to upper class Anglo-American men, and were therefore instituted to serve their needs. Simply put, these institutions were not built or structured to fit the needs of students of color, low-income, women, and other historically oppressed groups.

Protests erupted at CMC in response to the dean's message to Epinosa in part because students had already been dealing with a number of discriminatory incidents on campus, but also because the message insinuated that low-income students of color needed to assimilate in order to "fit the mold."

"Obviously we're not the minority."

Students are voicing concerns that seek to change the structure of the academy. While the requests for change proposed by students across the country are varied and sometimes specific to locality, there are several common themes, including: affordable tuition, addressing student debt, improving wages for student workers, and creating diversity initiatives that produce measurable results, such as increasing diverse administrative and faculty hires.

Students at UNLV made some of these and several other requests during their Mizzou solidarity demonstration. They also noted UNLV's somewhat unique status as a "minority-majority" institution, as it is firmly situated among the top five most ethnically diverse universities in the country.

Still, UNLV students questioned proposed university cuts to the Native American Outreach program. They also asked why Ethnic Studies as well as Women, Gender and Sexuality Studies programs have not kept pace with a university that is 55% of color and 56% female.

"Obviously we're not the minority," said student-organizer Desiré Gálvez, standing before university officials and the campus community. It was perhaps no coincidence that women and LGBTQ self-identified students were among some of the most vocal speakers.

Imani Patterson, head of the Black Student Organization, brought up the difficulty in completing an African American Studies major when so few courses are offered: "How can we learn about ourselves when we're not being taught about our cultures?" Her statement rings true for Latina/o, Native American, Asian American, and other students seeking more courses that offer culturally relevant material.

While the administration took on some tough student criticism, they should be recognized for taking a different approach from many universities. UNLV's administration met with undergraduates at both the student-led demonstration and also took further initiative to hold a town hall meeting afterwards.

UNLV's president, Len Jessup, and several of his top administrators met face-to-face with their students and listened attentively for six hours at both the demonstration and town hall meeting. They further extended a promise to take issues of diversity seriously while working with students in the future to reach tangible solutions.

Moving from Tolerance to Inclusion

Until educational institutions make fundamental changes, many non-traditional students will continue to struggle in the alienating environments of colleges and universities that they don't feel represent them. That is also why this generation is done with the simple tolerance initiatives of preceding decades: Today's students seek true inclusion and equal recognition on their campuses.

We need to thank students like those at the University of Missouri, who inspired much of the recent nationwide campus protests after they forced the resignation of their president, Tim Wolfe. During one exchange, Wolfe responded directly to a question from an African American student on institutional oppression. He told the student: "Systematic oppression is because you don't believe that you have the equal opportunity for success."

Would Wolfe feel equal if he were a student of color who repeatedly heard himself being called "n****r" on campus or had a swastika drawn in human feces in his dorm? Would he have felt safe or believed that his administrators really wanted him to succeed after doing little to address increasing racial incidents on campus?

As college administrators, staff, and faculty, we have an obligation to our students to meet their various needs; and all U.S. educational institutions should be making that same commitment. Finding the answers isn't always easy, but if we take the time to listen to our students and are willing to change some of our own thinking, together we can work on creating real solutions.

As both educators and students, each one of us bears responsibility for critiquing the DNA of U.S. educational systems and changing the culture of the academy.