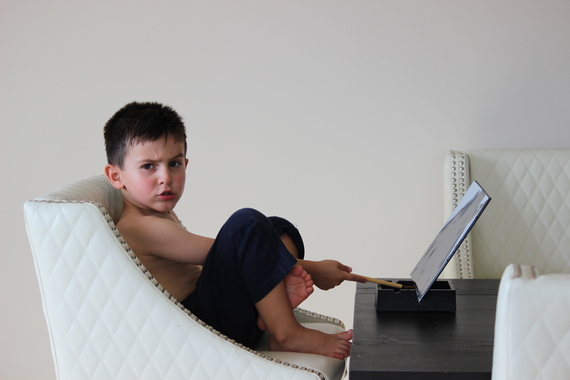 When my husband and I moved to New York City from Greece to specialize in our respective fields, we knew our choice reflected the highest quality of hospitals and universities in North America. Once we arrived, however, we realized our ability to find work here reflected a true lack of high-skilled workers. As two married but childless professionals, it didn't matter to us that the pool was smaller than we had believed. After all, we were still getting specialized training from the best in the world.

Everything changed, however, when we had our two sons! All of a sudden this issue that our country wasn't producing enough high-skilled labor became a part of our countless nightly discussions. Our concern wasn't that our sons might not get the same education that we received in Europe, or that they might not become doctors, engineers or Silicon Valley big shots. Our worry was the STEM (Science, Technology, Engineering and Mathematics) illiterate education in this country, which seems to contribute to this deficit we now face within our workforce.

Even disbelievers of the STEM labor shortage seem to agree that there is a "knowledge shortage" in the U.S. today. Robert Charette, who serves as a senior risk advisor to Global 100 CEOs and CFOs, explains that this shortage should bring us all to the discussion table regarding how to teach our children in schools so we can "engage their intellectual curiosity" while giving them the "best foundation to pursue a career."

Nevertheless, there is an inherent risk in emphasizing only STEM education and neglecting the attributes of a holistic education. After all, as Michael Teitelbaum, a senior research associate with the Labor and Worklife Program at Harvard Law School and author of the new book Falling Behind? Boom, Bust, and the Global Race for Scientific Talent puts it, "If students spend more time on math then they're spending less time on something else."

And so, with all this in mind, my husband and I agree that our children should know their STEMs, but we also don't want them to miss out on music, history and culture. If they have an inclination toward math and physics, we would be happy to see them pursue a career in that field, but they also need to be able to communicate and connect with people who don't participate in or understand those fields of study. They need to enrich their respective line of work with a holistic mindset.

To us, a STEM-based B.A, Masters or a PhD, doesn't define who our children are, but rather their choice of friends and companionship, their community engagement and societal responsibility, their wise judgments (in any difficult circumstance), their resilience and adaptability in the face of challenge, their love and quest for intellectual stimuli, their respect for themselves and others, and their virtuous living. It is all this and more that truly completes their life success.

What better way to learn and attain all of the above than from the lessons of world history and the wisdom of past generations? What better way to comprehend human nature and human scientific accomplishments than by studying literature, philosophy and history? Instead of simply teaching the principles of science, let's analyze how science has evolved over time. After all, every one of us is a continuation of what has become before us; and, every new piece of knowledge is built on former observation and expertise. Merely focusing on developing and training one aspect of our brains creates disconnected knowledge that lies miles from being creative and cultivating new thoughts.

This type of education awakens all the child's senses. It's a holistic approach that mandates all functional aspects of his brain (and not separately from his soul and body). It develops a foundation upon which he builds all kinds of knowledge -- including STEM principles. Now that is an education my husband and I would like for our sons, and for the rest of the children in this country.

Albert Einstein, universally agreed upon as the most prominent physicist of all time, emphasized the importance of "early cultivation of philosophical habits" when writing his December 1944 letter to Robert Thorton:

So many people today--and even professional scientists--seem to me like somebody who has seen thousands of trees but has never seen a forest. A knowledge of the historic and philosophical background gives that kind of independence from prejudices of his generation from which most scientists are suffering. This independence created by philosophical insight is--in my opinion--the mark of distinction between a mere artisan or specialist and a real seeker after truth.

And so I ask, as parents, teachers and citizens who care a whole lot about our future, what is the ultimate goal of our children's education? Is the STEM education enough for them? Will it teach them to be intellectuals who are productive personally, professionally and societally?

Swami Vivekananda, an Indian monk who is credited as a key figure in introducing Yoga to the West in the early 1900s, pointed out during a speech in San Francisco:

Education is not filling the mind with a lot of facts. Perfecting the instrument and getting complete mastery of my own mind [is the ideal of education].

As a mother, I know that I want one thing from my children's education: To cultivate and foster their best selves, to help them know who they are (in terms of both potential and weaknesses). My son wouldn't be a good clinician if he were passionate about painting and creating works of art all day long. My role as a parent is to recognize his assets despite my own personal beliefs and prejudices.

The most forceful driver behind a holistic education is undoubtedly a highly qualified teacher. The role of the teacher (and the school as an institution) is to lay the foundation of learning, to stimulate the students' curiosity and familiarize them with the classics and humanities, to make science, technology, engineering and math interesting subjects related to everyday events rather than imposed, test-oriented tasks, and to value knowledge as the ultimate goal (rather than remuneration as a life mission).

My own life mission is to support these teachers and administrators in building and improving such an educational platform for my sons and every other child seeking these values in their own education... because then they can become "real seekers," as Einstein so eloquently stated.