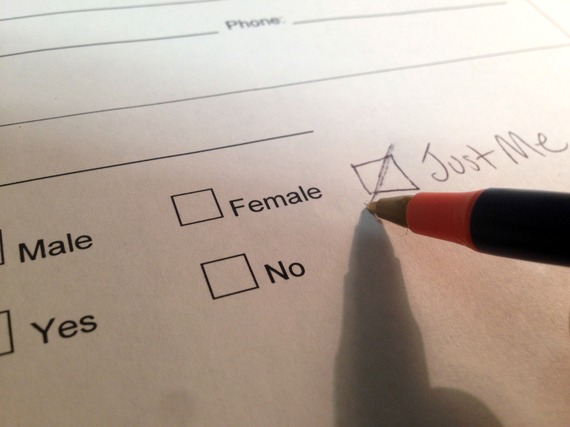 I'm writing this post today to come out, even if I'm still processing how I feel. I do so with the self-serving purposes of feeling validated and relieved, of seeking guidance and support, and of putting others on notice so that maybe I can feel more respected. I'm also doing it with the hope of contributing to the coming-out of gender-nonconforming people that - like the coming out LGB people - is necessary for the community to become visible and have a voice.

I'm writing because I'm tired of hearing people fight over what gender I "really" am.

I'm writing because I don't want to feel like a hypocrite when I preach to others the importance of being open with their healthcare providers, but feel like I'm still closeted myself.

I'm writing because how I feel matters.

I'm writing because I don't want to be blogged about anymore as a "gay man" who isn't entitled to have an opinion about gender identity issues.

I'm writing because I can't expect understanding from you if I can't express things myself.

I'm writing because I refuse to be dismayed by the violence and ridicule I've sometimes faced when I've made myself vulnerable to the world.

And I'm writing because I can't wait for our society to be perfect, or for me to feel like I fit perfectly into a category, to be honest with the world.

I was talking to a friend last week about how I had reached a breaking point about what gender pronouns to be referred to as. Maybe it's because of the linguistic awkwardness, but "they, their, and them" never felt right to me. I can't even pronounce, must less identify with, "zhe, zher, and zhim."

My friend encouraged me to come up with my own pronouns, saying that maybe they'd even catch on. "If anyone can do it," she said, "it's you!"

The first thing I thought was, although it was flattering that she thought I had that much, I didn't really want that responsibility, and I don't think the onus is on me. It's the twenty-first century, and the burden of defending this flawed cultural assumption should rest with its dwindling defenders, not my friend and not me.

I also realized that she was absolutely right with respect to expressing my own feelings. Not only was I the most-qualified person to do that, but I was the only person qualified to do that. And if I don't want gender pronouns, I don't need to have them.

So I guess I'm coming out as who I've always been: Corey. If you're going to refer to me, please refer to me as such. If it seems too onerous to always be using my name, rather than saving a syllable with "he" or "she," I leave you with the task of reforming the English language and our society to go along with it. I sincerely wish you the best.

Until then, I think I deserve your respect now that I've articulated how you can show it. Regardless of how you classify me in your mind, or perceive my masculinity or femininity or androgyny on any given day, it won't cost you anything to honor how I feel.

And maybe you'll go a step further. As I journey through what all this means, maybe you'll join me, support me, and show me kindness and love; maybe we'll contribute to making society more open and free; maybe you'll learn something about yourself in helping me sort through me.