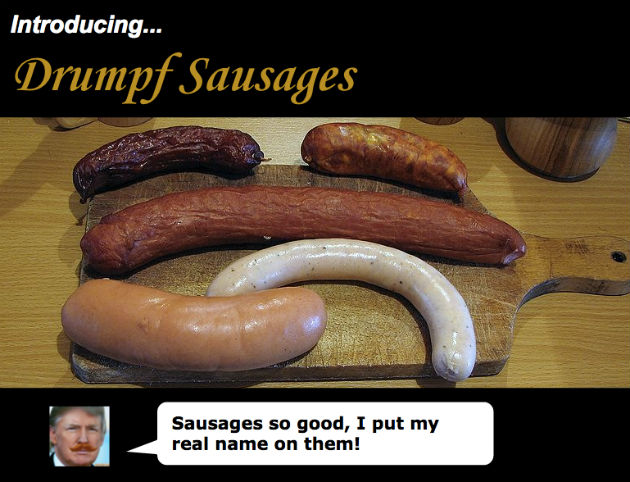 Thank you, John Oliver! You may look like a near-sighted parrot who works at a bank, but your "Make Donald Drumpf Again" campaign has given me a terrific opportunity to embrace my German heritage and move away from all the negatives now associated with the Trump brand.

#MakeDonaldDrumpfAgain is not just a campaign, it's a movement. It's also a great marketing opportunity. That's why, after the collapse of Trump Steaks, I am proud to introduce a new, top-quality product: Drumpf Sausages.

Drumpf Sausages are the classiest way to celebrate the sausage fest of this year's Republican nomination process. They are filled with seasoned and unseasoned meats and some of the world's finest meat byproducts that even I, with all my fabulous words, can't adequately describe. Drumpf Sausages also have a reliably thin skin. They are available in six varieties:

The Jeb: A favorite with the Establishment crowd, The Jeb is pre-cooked so it can be prepared using a low-energy setting and served lukewarm. Buy the Super-Pack and you'll never run out!

The Marco: A tiny, low-calorie sausage perfect for lightweight customers, The Marco is best served with a simple bottled water.

The Ted: For pyro-gourmaniacs who love food that explodes in their mouth, The Ted is a deceptive mix of Canadian pork with a secret blend of hot Cuban spices. Not suitable for non-Christians.

The Kasich: If you're looking for a balanced diet and a balanced budget, The Kasich is an economical choice, but women who might be pregnant should avoid it.

The Christie: High in fat and low in protein, The Christie has a slightly constipating quality, making it the ideal choice if you're stuck in a 4-hour traffic jam on the GWB.

The Donald: Bring your appetite, because this one is HUGE! The Donald is a legendary, German-style meat cylinder that Melania says is best brought out only on special occasions.

No debate-watching party will be complete without Drumpf Sausages.... Sausages so good I put my real name on them!