I've always been idealistic. When I was a student, my friends and I would often have long arguments about politics and ethics. Sometimes my friends would say things like, "Well, if you really believe that, why don't you just give all your money to people starving in Africa?" 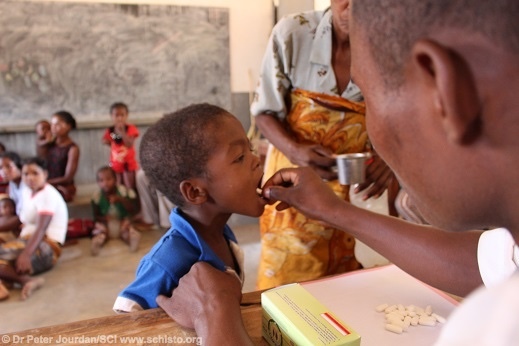 A worker for the Schistosomiasis Control Initiative (SCI) distributes a deworming treatment to a young child in Madagascar. SCI is consistently rated as one of the most effective charities in the world.

Obviously, this was meant to shut me up, but I thought maybe my friends were on to something. If you think all human beings are equal and you know your money can save the lives of many people in the developing world, doesn't it make sense to give a large amount away? Gradually, I started to think seriously about what I could do with my life if I really wanted to help those who are very badly off as much as possible.

First, I asked: how much could I give over my whole life? Looking up the figures, I found that as an academic I will earn about $70,000 per year on average, which is about $2.5 million over my career.

Second: how much do I need to live on? Well, life as a graduate student was pretty good. Despite living on about $14,000 per year, I really had all the most important things in life: time with great friends, beautiful music, a loving fiancée (now my wife). I even had enough money to fly back home to Australia to see my family each year. I knew there would be additional costs outside of graduate school, so I made a more generous allowance of $30,000 (which I've indeed been able to live within since beginning my career, including my mortgage payments and retirement savings).

So, supposing I lived within this limit for the rest of my career, how much could I give to good causes? A simple calculation shows that I could give about $1.5 million. That's a lot of money.

When faced with such a big number, you obviously think seriously about what you can do with it. Where should you give in order to have the biggest impact? How would you decide? That's the question I was left with.

When choosing where to give, people are often very interested in the percentage spent by a charity on overhead or administration: they look for the group that spends the least. I don't think this is a very useful metric. What really matters is helping others, and helping them to the greatest extent possible. If you could do more to help people by giving to a charity that spends more on overhead, that seems like the right thing to do. In some cases, spending more on overhead can help a charity to be more effective. It might help them to identify which programs are really working, and thereby shift more of their resources to those programs that do the most good. Similarly, money spent on fundraising can provide more resources to help the worst off.

Even if you're focused on just one specific issue, such as blindness, there's enormous variability in what can be achieved, depending on the program. For example, it costs approximately $40,000 to train a guide dog, but less than $100 to completely cure someone in the developing world of blindness due to trachoma. So, if you have $40,000 and you're wondering how to spend it, and you want to help the blind, you can either provide the benefits of a guide dog to one person in the developed world or you can completely cure more than four hundred people of this condition. Here there's a factor of at least four hundred in terms of the benefits that you can create by supporting the one kind of intervention as opposed to the other.

Differences of this kind are not rare. There is a wealth of material out there that allows us to give quantitative estimates of the cost-effectiveness of different health interventions. Some really excellent work has been done on this issue by the Disease Control Priorities Project and the World Health Organisation's CHOICE program. Their research allows us to evaluate the beneficial impact of different health interventions in terms of improvements in the duration and quality of people's lives - that is, how much longer people live, or how much healthier they are, as a result of a given program. The results show that some programs are tens, hundreds and even thousands of times better than others. Although our data is less reliable for other interventions like education or climate change, I think it's reasonable to expect that there are also big differences in effectiveness between programs in these areas.

For this reason, giving to the right organisations is extraordinarily important: there are huge differences in the amount of good we can do depending on where we give. Consider that if you were to donate to a charity that was twice as effective as another, you would be doing as much good as if you had donated twice as much. Now think about what that means if you choose to give to a charity that is ten, or a hundred times more effective. We need to think seriously about the effectiveness of the programs that we're funding. Giving to the right cause can multiply the good we do many times over. Where you give can make a much bigger difference than how much you give, or whether you choose to give at all.

When I discovered the extraordinary things I could achieve by giving my money to the best causes, I wanted to share this idea with others. I started Giving What We Can in November 2009 as an organisation for people who shared my way of thinking: people who were willing to pledge at least 10% of their income to charities that do the most to help others.

At this point, more than 1,000 people have joined Giving What We Can. They come from a range of backgrounds including nurses, teachers, civil servants, and students. Their pledged donations now total over $400 million. Giving What We Can has led the way for a growing network of likeminded organisations united around the idea of effective altruism, the art of thinking critically about how to do the most good. By using both our hearts, and our heads, we can do better than just making a difference - we can try to make the biggest difference possible.

If you would like to join Giving What We Can or want to know more about which charities do the most good, please visit givingwhatwecan.org

Toby is the Founder and President of Giving What We Can, and is a Research Fellow in Ethics at the University of Oxford.