Apparently folks all over the USA are having trouble knowing what to say -- if anything -- to loved ones who voted for the wrong candidate. Trumpers are not speaking to the Hillary folks. And the Not My President gang is refusing to speak to anyone who voted for The Donald.

I have this on good authority. The New York Times reported just before Thanksgiving that families were parting ways over their presidential choices. And I noticed on a CNN report just before the election that one interviewee said that one of her relatives was not going to speak to her if she didn't vote for Trump. Feelings run high on both sides. A friend of mine who is normally sweetly open-minded told me that, from here on out, he would have nothing to do with anyone who voted for Trump.

As for me, on that fateful Tuesday night, as the poll results poured in and it became clearer and clearer who was going to be the next president of the United States, I made a decision: I decided to stop dissing Donald Trump. I would give him a chance. I'd keep an open mind.

Both Hillary Clinton and Barack Obama in their post-election speeches indicated that they were taking the same high road.

I decided to do the same for the president-elect's supporters. Millions of Americans have let the world know, loud and clear, that they think both Democrats and Republicans have let them down. This is a good thing, actually. The message is out.

And now it's up to me as a coastal, urban, white, college graduate to listen. I need to listen to the friends, neighbors and relatives who somehow managed to convince themselves that their candidate could be a fit president. To the people who actually believed that Donald Trump was capable of paying attention to their legitimate needs. To the ones who thought he actually had the chops to get something done . . . . Oops. I said I was going to stop dissing Donald Trump, didn't I? 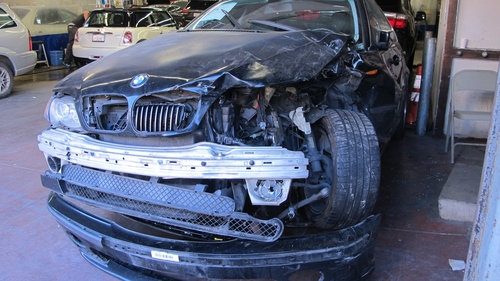 I took this photo on Nov. 8 thinking I could use it to illustrate a disaster story some far-off day. Photo by Barbara Newhall

I've seen worse disasters. I'm old enough to remember the turmoil of the 1960s and '70s. It was a time far, far more divisive than the moment we are in right now. I was a 20-something living in San Francisco at the time. My parents lived in a Cleveland suburb. I was against the war in Vietnam, and I was mad at the establishment.

Civility is not a word that my father, a Midwestern farm boy turned food industry executive, would think to use. But it's a habit I must have learned from him.

So, yeah. Today I'm keeping an open mind. I'm going to stop the Donald Trump put-downs. Really, I am.

Except, is it really a put-down to say something about somebody if it's actually true? . . . Oh, dear. There I go again. I'm going to stop this, for heaven's sake. I'm going to keep my mind open, come hell or high water. (With Donald Trump at the helm, is high water, if not hell, on its way?)

Honest. I'm swearing off my Donald Trump rants. I'm going to go back to writing about God and grandbabies and wedding dresses and the golden leaves that are falling off our magnolia tree this month. I'm going to stop dissing Donald Trump.

Hold me to it.

OK. If you really, really need to hear the vitriol I've slung at Donald Trump in recent months, you can find it at "Donald Trump Played Me. Here's How." But, honest to goodness, I do think that we need to abandon that kind of contentious rhetoric, or we'll never, ever get through the next four years. Believe me.