I had an epiphany yesterday. I'm mad as hell.

It occurred to me that technology is progressing so rapidly, without balance or boundaries that we're not taking the time to consider the future impact on our society. Or worse, maybe we do, and don't care.

In the morning I walked past a commercial playing on the Disney Junior channel that was so startling it felt like I had been slapped in the face. It was for Oral-B and featured a smiley child brushing her teeth with the assistance of an iPad propped up on the sink. Let that soak in for a hot second.

This was followed by an afternoon Twitter ad from Google For Education, with a child sitting outside under a tree with an "affordable Android tablet". 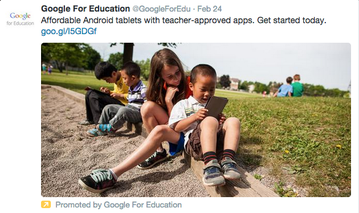 Let me repeat that; outside under a tree.

Then, I lost to my husband an intense game of rock, paper, scissors and ended up dining at his favorite guilty pleasure, Chili's. My eyes looked on in horror from table to table, each with it's own personal screen placed front and center and populated with fast, colorful, glitzy things to distract from any possible human interaction.

I threw it on the bench and covered it with my coat in the hopes my 3-year-old son did not catch sight of it only to lose to the 10 screens hanging on the wall in our section. He was gone, like a glass eyed zombie child. I snapped my fingers, pulled out crayons, asked "what do you like better: cupcakes, candy or donuts." He was present for less than a minute before he left again for the great big bug (kid) zapper in the sky.

To say I was mad at the close of the evening when my husband lay beside me with his very bright 6+ an inch from his face, is an understatement.

So, I grabbed my notebook from the nightstand and began to create a list which I now realize looks more like an old school burn book. 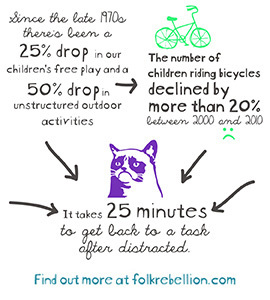 When something is "innovative" it usually means it's easier, cheaper and faster. These qualities may technically make it a better. But is it better for us? For society? For the world? We could look to John Sylvan, the inventor of the K-Cup, who just recently admitted he regrets the innovation.

The question therefore begs to ask; just because we can do something, does it mean we should? And if we are going to create the next new innovative, groundbreaking ______ (insert anything), then shouldn't we be responsible for the outcomes? What if we began reaching each new potential height in tech with a mindful approach? Balance and boundaries could go a long way in keeping us from shooting our collective self in the foot.

Not following? Hear me out.

Imagine if Steve Jobs created the iPad with a warning label on the packaging similar to cigarettes or diving into three feet of water. Would we be pushing them on our kids like drug dealers?

Imagine if there was a heavy dose of shame around whipping your phone out and sending communications wherever and whenever you damn well pleased. Would we be able to get back to enjoying dinners without the interruption from a coworker's oh-so-important email (insert eye roll) at 8 p.m.?

Imagine that we thought twice before we obediently nodded, waited in lines like lemmings, and said yes "I must have it" when the "next big thing" is released. And during that second thought, maybe we looked up and sensed that our liberties were being pushed, or our kids, or our jobs, or our health, or our moral fiber, or our future happiness. Maybe that second thought allowed us the space in our brain to do what our elders always encouraged... question everything.

And in that questioning maybe you realize that you're mad as hell too. Mad that while you were looking down at a screen, the world was hurtling towards a future that existed only through them and/or because of them.

You may be scared because you do not have any of the answers, hell, I am. But now you have the important part, the questions. "Is this OK? Is it making my life better? What's happening to our society?" And so on.

Our world is sprinting forward while we are asleep at the wheel (bug zapper), into one where our tech is consuming us. Where we are all becoming more shackled and imprisoned by the innovations to which there seemingly is no escape.

Are you OK with that?

I for one, am not. And I am sick of it being a one sided conversation because we lost the little bit of rebel in us that knew to question everything.

Friday March 6th is the National Day of Unplugging. Are you mad as hell? Ready to rebel? Today might be a good place to start.

Originally posted by Jess Davis on Folk Rebellion
Why You Should Be Mad as Hell Infographic is available here
Designer: Cara Holland