When Don Draper began showing up on Sunday night television, his visage shook loose the earliest memories I had of my dad. It's not that the "Mad Men" protagonist is my father's doppelgänger, exactly, but there are definite similarities. In many ways, the Drapers depicted on the AMC show, which airs its final seen episodes beginning April 5, paralleled my own family in a number of ways. 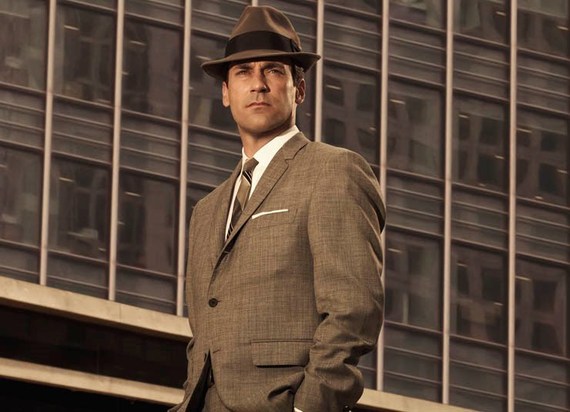 The Drapers lived in Ossining, N.Y., and so did we beginning in 1963. Before that, we lived in a Bronx apartment building on Fordham Hill, a place I hadn't thought of in years. But one glimpse of Don Draper in Season 1--complete with khaki raincoat, fedora and briefcase--and I was back on the 14th floor, watching from a window as my dad walked down the drive and toward the street. I imagined him turning around, looking up to wave, and adjusting the brim of his hat before heading to the train station a couple of blocks away.

Instead of walking to Sterling Cooper from Grand Central, my dad would make his way to Doubleday and later to Harcourt Brace & World. He was a publishing man--an editor--not a Mad Man. (He was also not a Lucky Strike man; he smoked L&Ms.) Once we moved to Ossining, my brothers and I would pile into the back of the station wagon when my mom picked up my dad from the train at Don Draper's stop.

Unlike Don, Dad was usually home for dinner. I wondered, though, as I watched that first season of "Mad Men," if my father ever got sloshed at lunch. He was sober by the mid-1960s. Surely there were tales, but I was never privy to any drunkalogues. I could definitely imagine him tossing back a few at noontime or in the bar after work. But that's all it is: imagination. I was so young when my dad got sober that I have no recollection of him drinking and, unlike Sally Draper, I was never asked to mix up Sunday morning Bloody Marys for my parents. By the time I wanted to sneak a smoke, Dad had quit so there was no stash of L&Ms to pilfer. 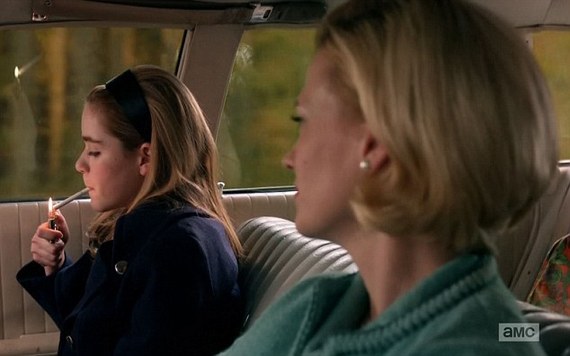 Don was in the army and his real name was Dick Whitman. While Private Whitman was fighting in Korea, my dad was in another kind of service. A religious brother in the Marist order, he was known as Brother James Austin and spent much of the 1940s and '50s wearing a habit and teaching Catholic boys in New York, Massachusetts and France.

Watching Don's philandering, I pondered whether my dad had ever fooled around on my mom. It was mostly unthinkable, but with all those years of celibacy, combined with a few too many whiskeys and my fertile imagination, I conceded to the remote possibility. It was almost as farfetched to fathom my feminist dad ever being so disrespectful to the office secretaries. He was a champion of women--my mother in particular.

Mom was nothing like pampered, former fashion model Betty. She was a nurse who didn't smoke, ride horses or take a shotgun to the neighbor's pigeons. If we'd played "spaceman" with a plastic bag over our heads her reaction would not have been, "If the clothes from that dry cleaning bag are on the floor of my closet, you're going to be a very sorry young lady."

Unlike Don Draper's world, rich with iconic period music, there are no pop songs creating a soundtrack of my own "Mad Men"-era childhood. There was classical music on the portable radio (no stereo until the early 1970s), and a piano purchased in the late '60s, on which my dad would pluck out tunes like "My Sweetheart is the Man in the Moon" and "Aura Lea," possibly unaware that Elvis had turned it into "Love Me Tender" more than a decade before. My parents weren't hip like that. So neither was I. Consequently, I was teased at school for not knowing "Joy to the World" was not a Christmas carol, but a Three Dog Night song.

As a product, "Mad Men" stands as a symbol for what good advertising does well: It artfully created an image and we were sold. I have an older friend who'd been a secretary during the "Mad Men" era; she found the show so realistic that it was painfully unbearable to watch.

But for this Boomer of a certain age, "Mad Men" is a quintessential piece of nostalgia, although I may have viewed it differently if my dad hadn't sobered up. Maybe then, like Sally, besides being a child of a recovering alcoholic, I'd also have been a child of adultery and divorce, who'd seen more unsavory things than a young girl should have to see before getting shipped off to boarding school.

While Don Draper is still very much alive, my dad's been gone for 14 years. I have no idea what "Mad Men" creator Matthew Weiner has in store, but as these final episodes air, I have written my own fantasy ending. It's not about reconciling Betty and Don, although I'm kind of rooting for that. It's not about the future of Sterling Cooper, although I have loved every client pitch, ad campaign and wacky office moment.

It's this: Wherever Don finds himself--on a bar stool, behind his desk, at Bobby's Little League game, maybe even on the evening train home to Ossining--my dad enters the scene. He is wearing his khaki raincoat and fedora and holding a briefcase. He introduces himself, they shake hands... and then my dad takes Don to a 12-Step meeting.