Last week, I discovered that I have Lulu reviews... two of them, in fact. For those of you who haven't read its New York Times profile, Lulu is an app that allows women to rate and review men.

It's not a free-for-all, though. Women first self-identify as a friend, hookup, crush, etc., then answer a few questions that are used to calculate a numerical rating, and finally -- if they so choose -- describe a man by selecting hashtags from a "good" and "bad" list... things like #AinAnatomy, #SmellsAmazeBalls, and the understandably popular #FartsInBed (who doesn't?).

We all expect to be evaluated -- first at school, then at work -- but that only covers what we do. Seldom do we get unbiased, anonymous feedback about who we are or how we make others feel. And granted, Lulu isn't super detailed, but hey, it's better than nothing. 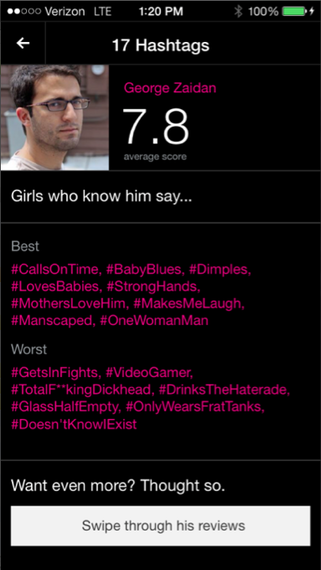 Apparently I have #StrongHands. Look out, jam jars... I'm opening you.

Two things about Lulu struck me. First, it makes you (sort of) accountable for your actions. I don't have kids, but I would bet that the watchful eye of their toddlers makes parents behave better than otherwise; my guess is that Lulu has a similar effect.

I was chatting with a female friend recently and I (jokingly) called her an ass. She (also jokingly) shot back: "Don't make me review you on Lulu!"

The app hasn't reached critical mass yet, but when it does... when men know that they have their very own product page, as if they were dish soap on Amazon.com ("doesn't clean as advertised, DO NOT BUY!!!!"), will that make them change their behavior?

A few years ago I was at brunch with one of my best friends, and he remarked -- offhand -- that he and another friend both noticed that I cuss a lot. They were dead right. I do cuss a lot, but I hadn't given it much thought until then, and more importantly, I didn't realize that other people gave it any thought at all.

I like to think of that brunch as my first Lulu review. I didn't change -- I still wield a mouth as dirty as any sailor's -- but I'm now much more conscious about that aspect of my behavior.

Now of course, guys should take Lulu reviews with a grain of salt. For one thing, you have no idea who is reviewing you. It could be a close friend or it could be someone you met briefly at a conference in 2008. Reviews could be jokes, pranks, or the result of inebriated iPhone use. And of course, the people reviewing you are (presumably) a very small percentage of your real-life friends, acquaintances, girlfriends, etc.

Case in point: my reviewers seem to think I have #BabyBlues (my eyes are definitely brown -- I checked) and that I #OnlyWearFratTanks (I stopped wearing tanks in 1996, and every single one was plain white and worn exclusively as an undergarment). 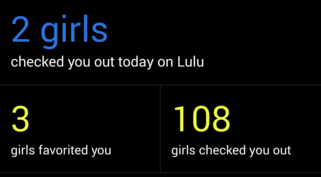 Over 100 women have checked out my Lulu review... that's a third of my female Facebook friends. Scary.

But there were certain hashtags that hit home. And that brings me to the second thing that struck me about Lulu.

Everyone has a list of things they don't like about themselves, things that maybe they've tried to change in the past, or that they're working on now. And when you see your fundamental flaws -- traits that, to you, have dimension, history, and reasons -- as a list of tweet-friendly hashtags... well, that can bite a little.

I only have two reviews. But there are guys who have 20, 30, or 40. I would wonder: does everyone see me this way? Do my closest friends, my significant other, my family, do they recognize my #FatalFlaw and just deal with it? And perhaps worse, do some of these #PersonalityTraits bleed into my professional life? Do my clients also think that I see the #GlassHalfEmpty?

And if we men answer "yes" to any of the above questions -- or countless others -- what are we going to do about it?

In the case of my #FoulMouth, I didn't change anything. But as for my occasional tendency to #DrinkTheHaterade -- which according to Urban Dictionary means that I'm "consumed by the negativity with which I speak" -- that's something I've recognized about myself and have been trying to change for a while.

And this is why I'm not requesting that my profile be taken down. Yes, most of the material in your Lulu review is sand and salt, but there are probably a few grains of truth buried in there, too... truths that you've recognized. And knowing that other people recognize them too is a powerful thing.

Maybe even a motivator to change.

So, to my two reviewers: thanks for the grains of truth. And next time we hang out, look at my eyes. They're definitely brown.