The founder of a popular YouTube channel about college partying told a reporter Wednesday to prepare her anus and suggested his followers try to get her fired.

The Twitter handle for "I'm Shmacked," a channel that posts videos of college students partying and has been known to spur campus riots, took offense at a story by Business Insider reporter Caroline Moss.

Moss' article had nothing to do with I'm Shmacked. It was about how one random guy named Chris Scott made a joke on Twitter that was retweeted by a popular comedian, causing the tweet to go viral and get copied by others on Twitter.

After Business Insider published the article, according to Jezebel, Moss found that @ImShmacked had copied the joke without crediting Scott. She tweeted her story at the the @ImShmacked handle.

I'm Shmacked responded with crudity, threatening Moss with petitions to fire and deport her, and saying she was "prepping her anus" for an assault. I'm Shmacked went on to say he would visit Business Insider's office, where he claimed he and his father "know" people: 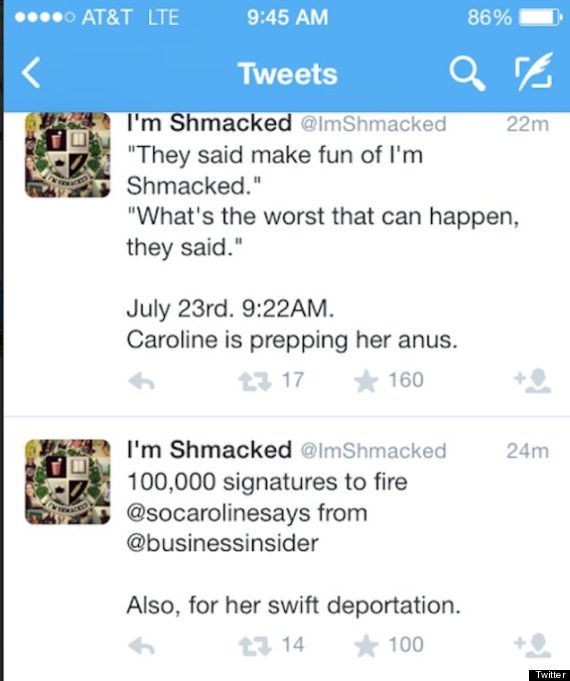 Lindsey Adler, a staffer at Vice, stuck up for Moss:

HEY guys, our pal caroline is getting harassed/threatened by sad 21yo boys. Please report: http://t.co/R1rdx5HeSO pic.twitter.com/soA2JHKk02 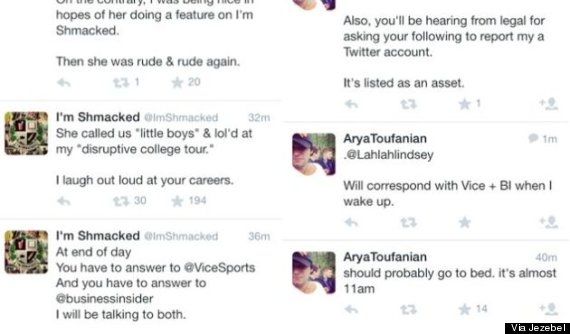 Only this and a couple other tweets are left on I'm Shmacked's Twitter feed:

No one should threatening those reporters.
That is 100% not funny.
Do NOT threaten or harass them.

Adler and Moss showed no signs they were worried about Toufanian's threats:

@Lahlahlindsey @RealBowenArrow @ImShmacked but congrats on all of your riots!!! sounds super fun and badass. you all must have HUGE dicks