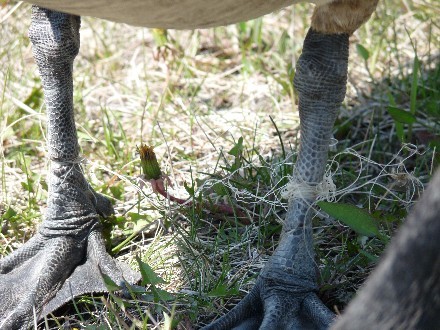 A few days ago, I rescued a Canada goose from fishing line at Tucker Park in Helena, Al.

There were a smattering of geese at the lake, grazing rapturously on new spring grass, when one suddenly went berserk, flying around the lake in a frenzy, trying to shed the string-like menace that had attached itself to its mid-section. I knew immediately what it was. Fishing line.

When he landed, I was able to get close enough to grab the line and pull it off before it began its insidious journey, wrapping itself around limbs or beak before cutting into the skin, limiting circulation.

The gander caught a lucky break. Most geese trapped in fishing line are unable to escape. And there are dire consequences. Three geese at our lake are victims of its deadly assault. Two are missing a foot; the other an entire leg.

Monofilament line -- a single-strand, almost invisible string -- seems to have a mind of its own as it wraps itself around legs and feet. The more you try to wrest free, the tighter it gets.

And now, with the approach of summer, there'll be millions of anglers out in full force -- children, parents, families, sportsmen -- littering the nation's ponds and waterways with the tools of their trade --unaware that thousands of innocent waterfowl will experience enormous pain because of their carelessness.

Fishing line appears without warning. It lurks along shorelines, invisibly lying in wait for any unsuspecting creature. Herons and cranes have been found dangling from trees, fishing line streaming from their wings; escape impossible. Nor does it discriminate. It doesn't care if you're goose or human.

My introduction to fishing line came by personal entrapment. I was standing by the edge of the lake one day when I looked down and saw a hook attached to my sandal. I still don't know how it got there but I reached down and pulled it off. Another time I pulled a long piece of it from the wings of a gander only to find myself caught up in it. The gander got free; then I had to be rescued.

It can also take days if not weeks to initiate a rescue.

Last summer two police officers unsuccessfully tried to rescue a goose at our lake with fishing line wrapped around both legs - with a connecting line in between that made walking near impossible.

A week later, a resident chased her through the cemetery until he wore her down. Then he cut the line from both legs. She still harbors a limp but at least she's line-free.

There are a few geese and ducks we could never capture -- and whose plights remain forever embedded in my memory. A favorite little mallard duck at our lake also lost a limb to fishing gear when a hook attached to its foot caught on brush and he chewed off the limb to escape drowning.

The tragedies continue. Recently, an acquaintance and I cut fishing line off a young Canada goose on the verge of strangulation. I ran to my car for cuticle scissors, which I now keep in my glove compartment for just such emergencies. The parents were frantic and the dad on the verge of attack until we were finally able to cut the line and release his son back to him.

We couldn't know that a few days later the youngster's mother would find herself in an equally appalling situation -- a hook in the neck with fishing line wrapped tightly around her beak.

Olivia, who is one of the geese in my study group, and her entire entourage (mate, goslings, parents and grandparents) were in a panic when some passers-by noticed her plight and called the police.

It took two people to capture and contain her.

One held her down while the other removed the hook and line with pliers.

Today, thanks to the quick-thinking of the good Samaritans, she is happy and well.

However, I have to wonder about the maturity level of anglers. How much effort does it take to reach down and retrieve cast-off fishing line? Or take a hook with you knowing that a barefoot child could step on it or a Canada goose find it dangling from an eye? And why do outdoor sports writers -- who gush over the joys of fishing -- rarely warn readers of its dangers to waterfowl populations?

Such tragedies could be avoided if anglers stopped leaving hooks and fishing line behind.

I also resent having to pick up after anglers who should be picking up after themselves.

And then Olivia shows up -- now almost eight years old -- and delights me with her wonderful sense of the absurd -- or the geese with the missing limbs fly in, landing with their effervescent honking, not letting the handicaps lessen their enthusiasm.

And I am reminded of the importance of this journey -- and my commitment to picking up fishing line -- even if it's not my own.

Still, I wish anglers everywhere would stop leaving it behind. You have no idea of the lives you would save -- or the pain and suffering you would alleviate by being good fishing citizens of the earth.