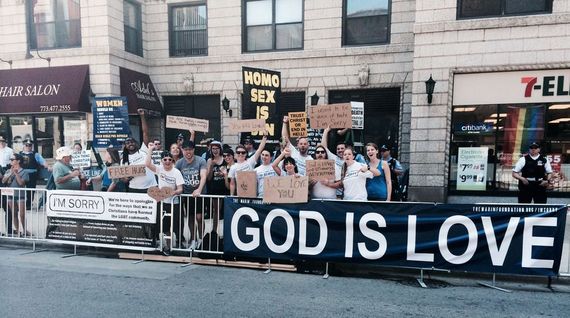 Someone on Twitter recently asked me how I defined courage. I sat in my room turning the question over and over in my mind but then I responded "Courage is being able to step onto the stormy waters, despite your fear, when Jesus calls."

I felt Jesus calling this last week and I was terrified to step out.

I've been wanting to participate in the Marin Foundations "I'm Sorry" campaign since the day I saw the picture of Andrew Marin, founder of the Marin Foundation, hugging a man in his underwear at pride. I remember sitting at my computer, tears falling onto the keyboard, thinking "what grace... what compassion.. what love this man has shown by this one simple act." 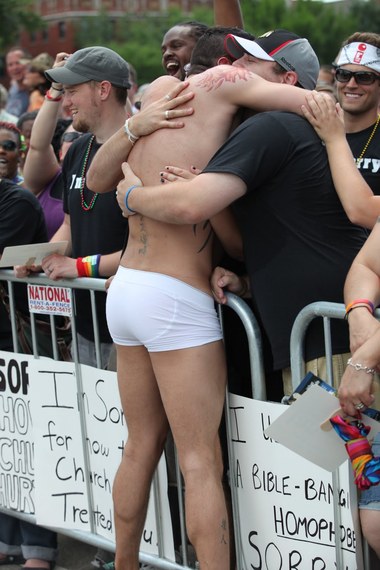 This was years before I felt God calling me to work in my own church building bridges with the LGBT community. I sought out the Marin Foundation after I felt called to this work, became friends with Andrew and the rest of the team, and have since been a huge supporter of their work. But this year I was finally going to participate in the campaign.

I was running late to the parade and texted Michael Kimpan, the executive director of the Marin Foundation, if he had already arrived. He was, and was situated by the protestors. I was across the street and stopped dead in my tracks when I saw the 15ft tall signs and the staunch man with a megaphone.

I stood across the street from the "street preachers." The space between us might as well have been stormy waters.

Finding the courage to make it across, I greeted the team of Christians -- LGBT and straight -- who had gathered to participate in the campaign. I felt somewhat safer being surrounded by them as the men with big signs of condemnation stood just a few feet behind me.

The shouting started with HIV jokes, self-professed discrimination of Christians, and insults about a "lifestyle choice." It was all pretty easy to ignore and laugh off as extreme and derogatory. That was until a beautiful, self-expressive teen walked by in an ensemble so colorful it put all the pride flags to shame.

"You're a walking identity crisis," He screamed pointing at the teen walking by. "No wonder you're all killing yourselves and suicidal." Ouch--that one hurt. I felt the tears welling up as I tried desperately to hold them back. That one hit way too close to home.

The entire 6+ hours I listened to these men scream, there was absolutely no redemption spoken. No grace, no love, no alternative offered in their flawed theology. It was all condemnation and hate masked with dearly held religious beliefs.

These street protestors were not saying anything new I haven't heard from my own church publications, our pulpits, and our summits. Sure these men were blatant about their hate for the LGBT community but in some ways I respected their honesty. Because too many times I've seen the same messages preached from my spiritual leaders masqueraded as "deeply held religious beliefs."

I wanted so desperately to yell "Look over here! We're not like them! We're the real Christians!" And I did yell--a lot. I screamed at the top of my lungs "Happy Pride!" and "God loves you!" losing my voice and trying my hardest to drown out the bigots with microphones. But there will always be bigots with microphones and love is communicated with more than just words.

Standing in the sun I held up my sign and smiled making eye contact with every person I could. Some people would read God and just keep walking by, mistaking me for the same Christians yelling hate speech few feet behind me. I had water thrown in my face and curse words hurled in my direction. I was psychically standing in the tension. But I wiped my glasses and kept holding my sign.

I had a girl collapse in my arms and cry when I told her God loves her, a guy jump off a float to tell me thank you, and I gave person after person hugs whispering affirmations into their ears. I clung to sweaty strangers in my arms affirming them as people, as God's beautiful children--perfect by His creation.

I said I'm sorry for things I never did and said I love you to people I will never truly know.

The I'm Sorry Campaign is the most Christ-like thing I've ever done. In all of the mission trips, service projects, and volunteer organizations that I've been a part of I've never felt closer to God than this campaign. I used my hands and feet to not just tell a community that has been unfairly marginalized and othered but show God's love for them.

I kept my sign as a reminder to myself in case I too have trouble hearing over the men with megaphones, that God loves me ferociously and that I'm fearfully and wonderfully made.

And He really, really does. My small, cardboard sign said much more than the 15 ft signs behind me could ever say. Because love is and always will be louder than hate. 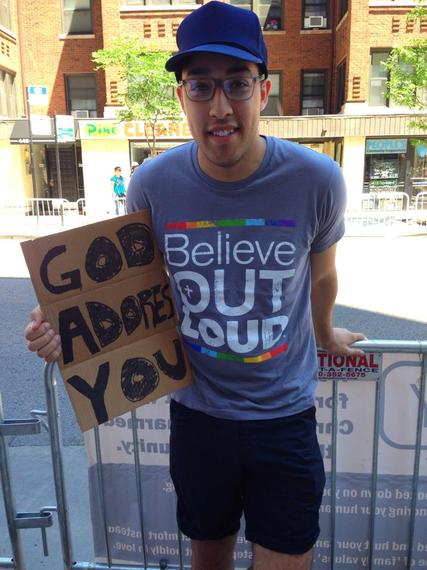