Don Imus is being newly and wrongly accused of a racist comment. Since I have been entertained mightily by Imus for thirty years, I am happy that this time I can stand up for him.

In the late 70s, I heard a cut from Don Imus' "1200 Hamburgers to Go" album on the radio and then was introduced to Imus' WNBC radio program by a New York attorney whom no one would accuse of being insensitive to the rights of African Americans. I listened to Imus skewer Mayor Koch and other politicians over the years when I was in New York and later via syndication. 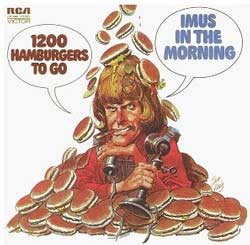 Imus was always funny, and increasingly he conducted interesting and funny interviews. It is not just that important people were on his show. It was that he got them to open up and say things that they would never say elsewhere. He never did get Andrea Mitchell to get her husband Alan Greenspan out of the bathtub, but it was fun listening to him try.

This got some people in trouble, but also made for great radio. No other morning show could touch it. He kept dozens of topics flying around at once. Politics, sports, music, his medical issues, his young wife and a bottomless pit of gripes and grudges all kept me laughing for the whole day. Plus, Warner Wolf!

Unfortunately, over the years, Imus made more and more comments that made me cringe. He thought he had license to make fun of various groups as if he were a member, which he was not. These chickens came home to roost with the inexcusable Rutgers comment.

Imus' demise also served the purpose of many people, including certainly the humorless Clintons. While not supporting Impeachment, Imus got many yuks by making fun of President Clinton's low rent behavior, his Clintonesque way with the truth and how Hillary figured in all of this. I am sure this is why Media Matters was keeping tabs on him in the first place. Ironically, In 1992, Clinton's New York primary victory can probably be traced to his appearances on Imus in the Morning.

Imus' new show has all the humor without the cringing. It is funnier than ever, with new cast members and a whole new group of broadcast personnel and executives to skewer. Imus has covered racial matters exceedingly well, including having Dick Gregory on the show for extended stints.

To hear the show in the Bay Area, I have to record it on my computer while I am sleeping and then transfer it onto my iPod. Inevitably, I am the only person in my BART car with a smile on my face.

So, I was chagrined to read a sound bite that seemed to indicate that Imus has implied that Pacman Jones' serial misconduct was because he was African American. I hoped that the context would get Imus off the hook.

And it does. Any fair minded person listening to the interchange with Warner Wolf must conclude that what Imus meant was that he was arrested because he was black, not that he committed bad deeds because he was black: the exact opposite of the meaning implied by those desperate to do Imus in and deprive me of my morning entertainment.

Imus is being profiled.

I hope that those who were quick to attack Imus before will be just as quick to defend him this time when he is right.

Three more things have occurred to me.

First, I agree that Imus may well have been being sarcastic about why Pacman Jones was arrested. After all, everyone knows that the main problem he had was been involved in a gunfight during the NBA All Star festivities in Las Vegas that resulted in one person being paralyzed from the waist down. The incident was preceded by disorderly behavior in the strip club involving Pacman "making it rain" by throwing money onto the stage and getting into a beef with the club owner who had his dancers pick up the money, apparently over $81,000. There are also separate incidents accusations and tapes from a drug dealer and charges of assault from a second stripper.

On the other hand, Pacman pled guilty to only a misdemeanor (conspiracy to commit disorderly conduct) and received 200 hours of community service, so maybe he was less involved that the reports indicate.

Sarcastic or not, I think the comment is fair enough. Maybe it was not the most thought out thing anyone has ever said. So what?

Second, as one commentator pointed out, Imus has led intelligent discussions of race with Debra Dickerson as a further example of the contribution Imus has made. We don't improve racial relations by ignoring the problem. My main thesis is that the people who are attacking Imus don't listen to him.

Finally, many commenters have accused Imus of being old. That is an okay epithet, huh?!