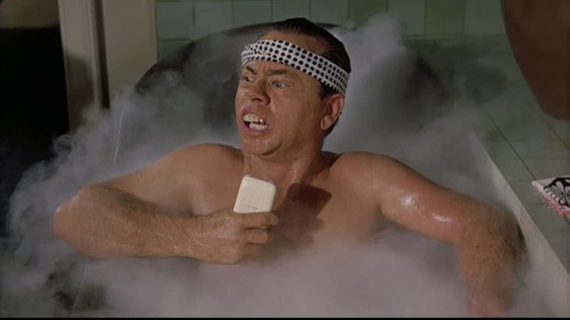 What Happened to Our Swagger?

Man, I miss Bruce Lee. He was a bad ass. He was 'effin cool. I'm old enough to remember what life was like when he was around. Even though he died in 1973, his impact on American culture was immense.

He was such a powerful magnetic force that his legacy endures today. His name is still recognized worldwide. His fans are still watching his movies forty years after his death. He was and still is, an international superstar. If there was anyone that we could be proud of as Asian Americans, he was it.

Bruce Lee made me proud to be an Asian American in a way that's far beyond anything we have today. I remember very distinctly watching Bruce Lee and feeling special. I was proud of how he was representing me, as an Asian American.

Put simply, he was the hero; a sex symbol.

Growing up as a young boy in America, he was a strong masculine role model to look up to. But not just any role model, he was an Asian American one. I miss that feeling. I say this having enormous pride in watching the successful launch of Eddie Huang's Fresh Off the Boat. It's another breakthrough moment for us as Asian Americans. It's way too long in coming. For the record, I think Eddie Huang is pretty cool too.

But I'm astonished that after four decades have passed since Bruce Lee starred in The Green Hornet on Primetime T.V. that we are talking about how important it is that Asian Americans are breaking ground. I think that's B.S. We broke ground a long time ago. And we did it in a way that made us feel proud of being Asian American. 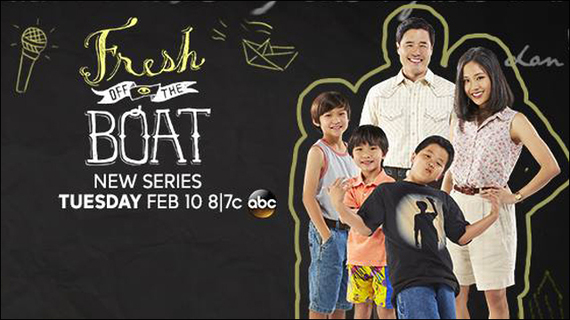 Yes, I enjoyed Fresh Off the Boat"immensely. Congratulations to Eddie, the cast, and all the other Asian Americans behind the scenes who worked so hard to make it happen. Based upon Eddie's often-public struggles with the network establishment, I can only imagine the frustration on all sides to get to this point. Eddie had to fight a battle for all Asian Americans and I'm sure he has some scars to prove it. I hope he's proud of his accomplishment, because I certainly am. It's a good moment for us.

But dammit, is this the best I can hope for? I like comedies just as much as anyone else, but why can't we have Asian Americans that are the heroes? Why isn't there an Asian American tough guy to look up to? You know, a guy that actually gets the girl? Someone who wins in the end, whom audiences of all colors aspire to be? When was the last time we had someone like that?

As an aside, I won't even get into the insulting roles Asian American women have had to play. For a longtime, America's image of Asian women was relegated to caricatures of submissive sex dolls or war ravaged prostitutes. While we have moved on from the debilitating portrayal of an Asian woman soliciting GI's with "me love you long time," the scars of that characterization still haunt my community today. In many ways, Asian American women suffer from the opposite problem of emasculated Asian males. They are burdened with the sex symbol stereotype. But it's one tainted by a cheap tawdry aggressiveness.

So what are we left with today? We are too often cast as socially awkward nerds, introverted disconnected outcasts or broken English speaking props used as backdrops to lend a sense of the exotic. We are never the leading man or lady. Which brings us back to Fresh Off the Boat and our role as comic relief.

As I said, the role of comedians is important, and I'm glad for all the Asian American comedians out there, but if they are not counterbalanced by serious straight men or women in leading roles, we are relegating ourselves to being viewed as only comic relief. And without a dose of swagger and toughness, humor too easily comes off as insecurity. Which means we risk being turned into the butt of jokes.

I wonder, when audiences see a naked Asian man jumping out of a trunk of a car swinging a crow bar yelling nonsense in half English (The Hangover) is the audience laughing with me or at me? The same can be said for countless other portrayals of Asian Americans; Long Duck Dong (Sixteen Candles), Fuk Me and Fuk Yu (Austin Powers), Mr. Yunioshi (Breakfast at Tiffanys') are just a few examples.

To be clear, I am not putting Fresh Off the Boat in the same category. After all, it's a show created and written by Asian Americans. By rights, Eddie Huang has the freedom to portray Asian Americans anyway he wants and I don't take any issue with they way he or the writers have. But where is my secure confident counter point to comedic insecurities about how Asians do or don't assimilate?

The irony of Eddie Huang's embrace of African American culture is not lost on me. It's a manifestation of our own invisibility. Because we don't have an identity of our own, we are left to assimilate into the broader white culture or adopt different minority's culture. For many Asian Americans today, that tends to be the hip hop centric black culture.

Not surprising given the number of suburban white kids that have as well. But just as inauthentic as it seems for white kids, with no real attachment to black history or persecution, to mimic the fashion and form of urban rap artists, it seems equally as odd for Asian American's to do so. Even so, I'm glad there is an alternative. I'm glad we, as Asian Americans, embrace the African American culture because it validates life outside the establishment. It's a feeling many of us can relate to.

It's why the moniker "model minority" feels just as much like an insult as compliment. By embracing black culture, we are telling the world we aren't just sell-outs to the establishment. We are more than a well-behaved lapdog seeking a master's approval. But we shouldn't have to borrow from black culture, should we? Why don't we have our own renegade Asian American culture? Why can't we represent?

For a time we did. When Bruce Lee emerged on primetime TV as Kato in the Green Hornet, his persona struck like lightening. Within a few short years, all of America seemed to embrace him. Asian spirituality went wild. Hollywood stars and professional athletes sought him out and began adopting his style and mannerisms. You would see celebrities wearing Mandarin Collars and Kimonos. Martial arts studios opened as fast as you could say chicken chow mien. For the first time we had an identity which was ours and in demand. For a very short while, being an Asian American meant you were cool.

And that was Bruce Lee. He was 'effin cool! He had a swagger that came for being secure in himself, as an Asian American. He was proud of it. So much so that his "Asianness" was his persona. Today, we take all of his Eastern philosophical teachings for granted.

These notions have become part of our American cultural lexicon, but they have roots in Asian philosophy. Bruce Lee's spiritual and charismatic personality came from his Taoist, and Confucian principals. It was his Asian heritage combined with his incredible martial arts skills that made him so attractive to Western audiences.

Not only was he a sex symbol, he was a scholar as well. And that's what made him so special to me. In watching Bruce Lee, I was proud to be Asian. He embodied both physical strength and intellectual prowess. I looked up to him as an Asian American role model because he was someone I wanted to be, and I wasn't the only one.

More importantly, he wasn't fighting to assimilate. He was doing the opposite. The power of his persona pulled American culture his way. Rather than lose his Asian identity, he infused America with his own identity. He was a legitimate Asian American hero.

That was a while ago. 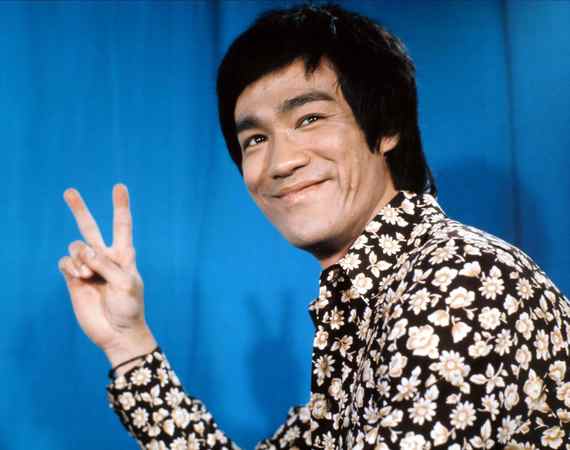 Ever since Bruce Lee died, much of our self-confidence as Asian Americans has died along with him. Today, it feels like we have no Asian heritage to embrace. We no longer view martial arts or Eastern philosophy as our own. Most of us would feel uncomfortable embracing Bruce Lee's spiritual side. We are more likely to hear a Western yoga teacher or self help guru say "be like water" than another Asian American. We are more likely to see a white person wearing a Karate Gi, or Japanese Kimono, as a costume on Halloween than adopt it for ourselves. And I'm sure other Asian Americans would feel just as uncomfortable if someone were to ask them, "Do you know Kung Fu?" Today, even saying words "Kung Fu" can seem embarrassing to us. But for while, when Bruce Lee was everyone's hero, I was glad to be asked that question.

We, as Asian Americans, fight to assimilate because that's what we're used to doing. We have been rewarded for it. But there's been a cost too. When we hear anyone talking about race and culture it strikes a nerve. It makes us uncomfortable. It hits upon a deep insecurity we all have. When you don't have your own identity the most threatening thing in the world is talk about that very fact. No Asian American wants to be called a "twinkie." Which is why there are lots of us who don't want to be identified as Asian American.

It's also the reason I believe we don't have a place in Hollywood or television, because we don't know who we are. And god forbid anyone tries to impose one on us. Better to be invisible than reveal our own insecurities. When I hear comments that talk about a show or character being "too Asian" I cringe. What does too Asian mean? Would you ever hear a black person wonder if a black character is "too black?"

And where's the outrage when our community is slighted? Who's out there speaking for us? Television is full of minority pundits commenting on racial issues pertinent to their communities. There was no shortage of African American commentary on the injustice of Michael Brown and Eric Garner. Asian Americans suffer racial injustice all the time. But when no one speaks up for us, no one hears it.

Instead, I want everyone to laugh with us, or better yet, have everyone think it's cool to be Asian. Like they did many years ago. That's why I'm waiting for another Bruce Lee, someone with swagger and sexiness. Someone all of us can rally around.

An 'effin cool Asian American hero. That's what I want!

Editor, TypeZen.com: 'Going with the Flow in a Type A World'