This post is adapted from an essay in John V. Lindsay: 50th Anniversary Commemoration, out today from International Publishers.

I first met John Vliet Lindsay in 1964. I was a Queens high school student whose letter to Congressman Lindsay got me a meeting with him.

Arriving at his office, I met the Congressman's EA, Barney Patterson; then his LA, Connie Eristoff. Barney's a girl, Connie's a guy -- progressive stuff for a kid from Flushing. Then, ushered into his office, to the preppiest guy I ever laid eyes on -- Robert Redford looks and Eleanor Roosevelt idealism ... he was, nonetheless, a Republican. Their last presidential candidate was Goldwater. I hesitated but, in the immortal words of Some Like It Hot: "nobody's perfect."

Only he kinda was.

On the way out, Barney says that if I am still smitten come the spring, contact Mackie Arnstein to volunteer for Lindsay's next campaign.

Spring arrived, fifty years ago. I took the #7 train from my parents' home to Grand Central, then cut to 60 East 42nd, near the Roosevelt Hotel, to the Lindsay HQ -- for mayor. And there is the leggy Arnstein (my first Jewish Preppie) with desk space just for me -- and a stack of envelopes. I'm officially a volunteer.

Lick & stamp, stamp & lick, an endless repetition. But scoping out the office provides ample distraction. Now ... right above my desk is a mezzanine with more desks -- but no envelope licking ... and a buzzy kind of energy. This, I discover, is the domain of Sid Davidoff. Rapid fire, high testosterone, distinctly less WASPY; even the girl-watching is different. It was not exactly sexy. It was just sexier than the "look at me I look like you" preppy thing downstairs. (Think Dottie, our own Angie Dickinson.) So, after awhile, I inveigle my way from the envelopes to the mezzanine.

And, while not instantly obvious, the entire trajectory of my young life changed at that moment.
I am now part of the "I'm with HIM" world of Pols and their Posses. Goodbye #7 train, hello Manhattan and daily life with HIM. What an education. I can't get a good seat at my parents synagogue on Parsons Blvd., but with HIM, the entire city opened wide -- best seats in the best houses. The Waldorf, Sardis, Wall Street, the New York Times, the Knicks, Broadway, Brooks Brothers -- an endless parade of the topmost stars, the boldest names and the toniest joints in town.

Even back in Queens I'd moved up from my dad's Pontiac, to riding in mini-motorcades. In Brooklyn rabbis lead us around in the daytime and these polite scary looking guys show us the ropes after dark. Who they were? "Don't ask." For the Bronx, I learned to say: "El Proximo Alcalde." We are after every vote.

And Lindsay, without losing a button from his first or third shirt of the day, seemed to fit in everywhere. He looked like the aspiring Mayor of Manhattan, but now felt welcome in Rockaway, Harlem, Bensonhurst, Jamaica and Arthur Ave.

And everywhere he went, we went. And we began to feel a part of the City too. The Ring around the Candidate -- Sid, Norman, Shelly, Jimmy, Dennis, Chick, Lois, the Teddies, Jeffrey, Arnie -- was his hand-picked Secret Circus. But the tent was big, and in the outer ring I reveled and watched and grew up. God bless those guys and girls -- my inspirations. 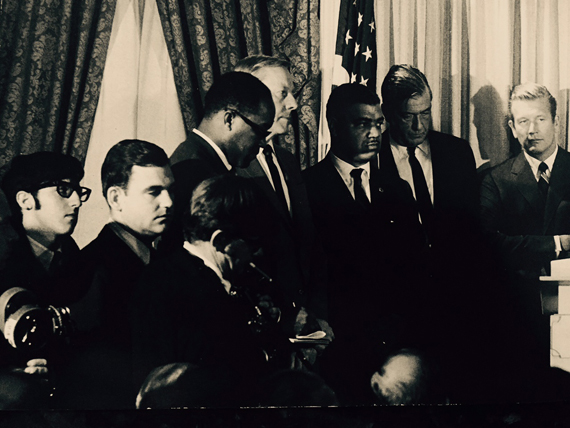 This picture says it all. A few years later: a line-up at the Pierre Hotel. John Lindsay, Andrew Heiskell (CEO of Time nc.), Whitney Young (civil rights leader), Ivy Leaguers and dignitaries; and, at the end of the line Ronald Ziegler, Press Secretary to President Nixon, followed by Steven Haft, Flushing High School grad now -- a more regular part of the Traveling Circus and just past my 18th birthday.