They have been ostracized and marginalized in the great U.S. health care reform debate, but now a group of doctors, many from Physicians for a National Health Care Program, are hitting the road and taking action, and they visited Denver on September 14. They will arrive in Washington on September 30 in time for a rally in Lafayette Park, next to the White House. 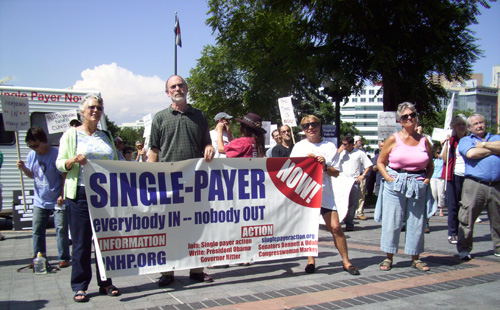 Doctors and others demonstrate for single-payer

Retired physician Dr. Joe Eusterman calls single-payer health care the "fiscally conservative, socially responsible" health care reform. Private insurance is simply not sustainable. When he encountered Wendell Potter, former CIGNA executive, at a recent rally, Potter told him there should be no place for insurances profiteering from primary health care. Dr. Eusterman notes that the Swiss and most other industrial nations don't tolerate for-profit primary care. He cites a recent study by the California Nurses Association demonstrating that a family of four with an annual income of $56,000 would pay just $2,700 per year for health care under HR 676, the proposed House bill for single-payer coverage.

A number of Colorado doctors lent their support to the traveling physicians. Dr. Cory Carroll, a solo family practice provider from Ft. Collins, describes a U.S. "nonsystem" of health care that is "destroying primary care." One of his patients has insurance with a $3,000 deductible, and thus refuses to have a diagnostic colonoscopy because he cannot afford it. Because government insurance payments are more timely and simple to file for, Dr. Carroll notes that 60% of his practice consists of Medicare recipients. Due to laborious, costly administrative paperwork required by private insurances, he predicts he is six months from dropping all commercial insurances.

The U.S. has good practitioners, but we don't get early treatment. "You can't get preventive care in an emergency room," said family practitioner, Dr. Eugene Uphoff. Through his three months in Yugoslavia post-medical school, he viewed a place where medical school is free, and no med student can choose a specialty until they have dedicated two years providing primary care in high-needs, rural areas. He notes it is not uncommon for new doctors in the U.S. to carry medical school debts of $250,000 to $300,000, one reason so many shun primary care for a higher-paying specialty.

A Canadian physician he recently met asked Dr. Bob Seward point blank, "Why don't you Americans take care of your own people?" Dr. Seward spent 15 years at a VA Hospital, where the care was good, and he was never told he could not order a test for a patient. The switchover to electronic records was tough, he said, but reaped many rewards. Though 100,000 vets were displaced by Hurricane Katrina, all of their medical records remained accessible.

Dr. Margaret Flowers flew to Denver to join the doctors' tour through a couple of cities. Dr. Flowers is one of the "Baucus 13" -- doctors, nurses, lawyers and other single-payer advocates who were arrested and charged with "disruption of Congress" after standing up before Senator Max Baucus and the Senate Finance Committee to ask that a single-payer advocate be permitted to testify. The May hearings were intended ostensibly to listen to a representative cross-section of health care stakeholders, but inexplicably marginalized the single-payer model. On June 11 Flowers was finally granted the right to testify before the Senate HELP Committee.

Dr. Flowers left her pediatric practice in Maryland a couple of years ago to work for single-payer health care reform full time. Lack of political will is the only obstacle she sees to meaningful reform. She reminds everyone that the Weinder Amendment presents an opportunity for our representatives to vote for HR 676, a Medicare-for-All reform model after the House reconvenes in September.

The doctors plan visits to congressional leaders on October 1, and intend to request a meeting with President Obama in Washington. Their message to legislators, stated on their website, is to reboot the conversation, and use HR 676 as a starting point for a new health care conversation. Assemble a team of the "best minds among health care professionals" to present a single-payer proposal to Congress. With concerns about deficit spending, single-payer remains the only model that saves enough money to provide comprehensive health care access to all -- a point that has been glossed over in Washington.

The doctors ask that white ribbons be worn and tied wherever visible. If you are in Washington tie a ribbon to the White House fence and take a picture and share it with them, suggests Margaret Flowers. The ribbons demonstrate the dire need for action in memory of the 60 people a day who die without health care access in the U.S.

For more news and commentary from Colorado, check out HuffPost's just-launched Denver section.