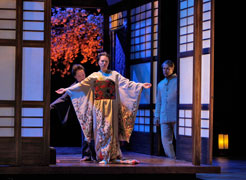 The plot could not be simpler: American naval officer jilts Japanese wife who later commits suicide. But Puccini's Madame Butterfly was not at all easy to compose, nor initially to stage, and it flopped at its premiere in 1904.

Butterfly, of course, eventually became one of the most popular works in the repertoire, and it remains so. But there are pitfalls: It can easily lapse into picture-book sentimentality, and the work has been tarred in some quarters as a period piece -- pretty but passé.

Even top-tier productions occasionally stumble. Robert Wilson's Kabuki concept at the LA Opera was classy and lovely to look at, but its human dimension so bloodless that it drained the truth from Verismo.

Enter the Santa Fe Opera. Butterfly has been a special province of the company since its inception in 1957. It has opened each of the Opera's three stages, and it launched this season, after a 12-year absence, with a new production dedicated to the company's visionary founder, John Crosby.

With top-flight singing and acting, an inspired stage direction by Lee Blakely, and an insightful stewardship of orchestra and chorus under Antony Walker, this Butterfly triumphs.

For the fated home on a Nagasaki hilltop, Jean-Marc Puissant's scenic design employs a central cube that rotates on its axis and migrates around the stage in varying perspectives, in and out of doors, with Japanese screens revealing and obscuring the interactions. Rick Fisher's lighting alternates day and night to mirror Cio-Cio-San's own hope and despair.

The passage of time is hinted at with the sudden appearance of telephone poles in Act II, a reminder of the rapid transformation of a hermetic Japan after the visit of Commodore Perry's naval flotilla -- an intimidating modernization that parallels Cio-Cio-San's Americanization under the influence of the blustery Pinkerton.

The emphasis overall is on emotional veracity over ritual, naturalness over pictorialism.

As Cio-Cio-San, Kelly Kaduce brings an amber-tinted soprano, particularly rich at mid-register, to her deeply felt, dramatically satisfying interpretation. Whether coming to grips with Pinkerton, warding off suitors and slanderers, or chastising her maid Suzuki for her lack of faith, Kaduce's is a full-blooded Butterfly -- strong, stoic, and vulnerable only in private. She is also a hands-on mother. Singing at full voice, this Butterfly picks up her son, Trouble (Makai Pope), and carries him around as she converses with him. Waiting for Pinkerton all night, she sits erect, motionless, in Zen-like determination before singing with aching pathos.

It is a performance to treasure.

Brandon Jovanovich is no less impressive. His silvery-bright, ringing tenor, with a visage of pug nose and jutting jaw, enhance a stage swagger that nails the domineering, superficially charming but ultimately boorish Pinkerton.

The navy officer's gauche manhandling of Butterfly's precious ancestral dolls is intrusive; his bar-style toasting at the wedding is painful to behold, especially in contrast with the deliberate and delicate tea ceremony of his wife's family. After such antics, Pinkerton's emotional breakdown at the return encounter with Butterfly in Act II, with his American wife in attendance, is all the more pathetic. Jovanovich's contribution is essential to the tragedy.

Strong breezes blew through the seats of the open-sided Crosby Theatre Friday evening. Could they be the winds of change urging a dose of humility in America's foreign policy? Can we afford any more Pinkertons in a realigning, multicultural world?

Great art has a way of extending its message into other spheres. Madame Butterfly has been popular for over a century, yet this production reminds us just how relevant it continues to be.

Madame Butterfly plays through August 26 at the Santa Fe Opera.