What is it about pictures that prompts journalists, activists, and social media users to take liberties with people's privacy, lives and destinies, and be sloppy in what they publish?

Can the race for scoops, scandals, clicks and ratings be the undoing of proper verification, accuracy, fairness and balance?

A case in point is Egyptian daily Al Youm Al Sabeh (The Seventh Day) that published a Reuters item about the death of former Washington Post editor Ben Bradlee and used a photo of Ghassan Tueni, the "dean of Lebanese journalists," who passed away in June 2012. 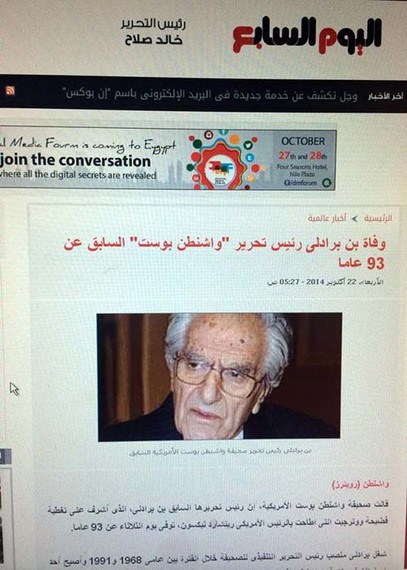 Perhaps an innocent mistake, but a major journalistic blunder.

Lebanese daily Annahar that Tueni headed for decades went the extra mile in its online edition when one of its reporters published a picture and brief story on a same-sex wedding party she insisted she had witnessed at a mountain resort.

Civil marriage is discouraged and not recognized by religious leaders in Lebanon and same-sex marriage is out of the question since homosexuality is considered a crime under Lebanese law.

The next thing I knew, Annahar pulled the piece on the two men and published a clarification and apology stating she had made up the story, undermined professional standards, and besmirched the newspaper. 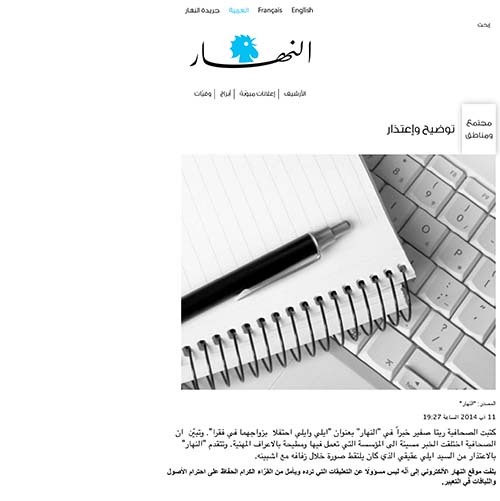 Both the reporter and paper declined to comment on the incident which I learned involved potential litigation, notably since later reports said one of the two men in the infamous picture was actually the best man at the other's marriage to a woman.

The reactions from readers were unequivocal: sack the reporter who shouldn't have posted pictures from a private wedding - regardless of who was getting married.

Not long after that, the news website of MTV Lebanon published a picture under the headline "Gay Marriage in Egypt...What Was the Reaction?" 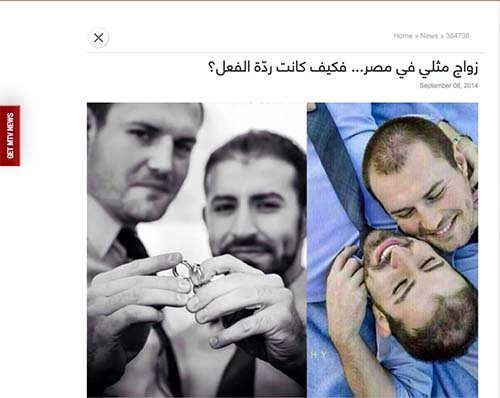 A video of the ceremony aboard a Nile boat went viral on social media, leading to an investigation by police in Egypt where homosexuality is also considered illegal and immoral.

Eight defendants in the case were later sentenced to three years in prison on charges of homosexuality and offending public morals, according to Egyptian media.

When news also went viral of entertainer Robin Williams' suicide in August 2014, media and citizen journalists worldwide were all over the map reporting it -- many in very poor taste.

A day later Lebanon's Future TV's website upped the ante by showing a photo purportedly of Williams' corpse with the mark of the belt he used to hang himself around his neck, which several websites later said was a fake. 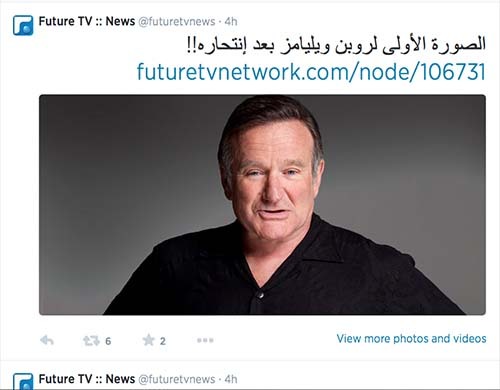 Across two ponds, "real-time news DJ & occasional journalist, but *not* a social media guru" Andy Carvin tweeted that The Atlantic magazine had used a Reuters (again) picture of Muslim women watching an eclipse and suggested they were ISIS fan girls. 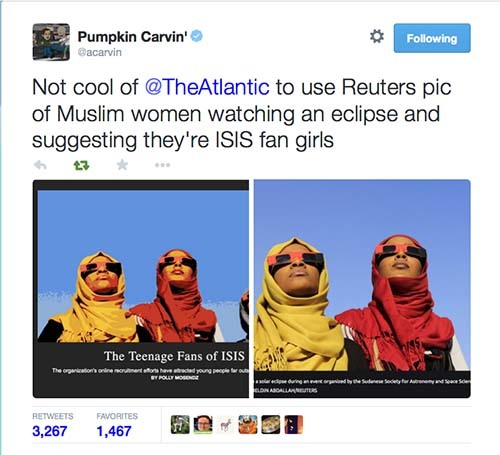 Screen shot of tweet on The Atlantic's misuse of a picture

It was later replaced by a photo of ISIS male youths.

But I prefer to offer practical solutions.

Taakad aims to do more than raise awareness about the verification problem by engaging both practicing journalists and citizen reporters in the fact-checking of social media news reports via a web platform called CheckDesk. The collaborative campaign, which will run through the end of November, is being conducted in English with Beirut Report and in Arabic by three Lebanese bloggers and is being supported by Meedan, the organization that created the CheckDesk software.

By modeling social media verification best practices and encouraging others to do the same, Taakad aims to minimize errors and improve accuracy in the social media content shared on news and other platforms in Lebanon.

In Amman, the Jordan Media Institute launched the portal "Akeed" (For Sure in Arabic) to monitor the media's performance and verify news content.

There are dozens of verification programs and apps to help avoid all manner of mistakes. But it's up to journalists, bloggers, activists and others to exercise good judgment and refrain from causing harm.