In 2008 I was walking through the woods near my home thinking of nothing in particular when out of nowhere, the words came into my mind, "the other Iran." Nothing, however, is ever really out of nowhere. Even now, whenever I think of the color blue, I think first, not of the sea or the sky, but of a dome. A dome in Isfahan, Iran. It lodged itself in my mind some 35 years ago, one gray afternoon in the British Library, which itself was housed in a beautiful dome at the time.

Oblivious of the scholars shuffling to and fro around me, I gazed at a full color plate of the dome of the Royal Mosque in Isfahan. Its perfection of shape and its blue never left me. It was my Iran phase. Around the same time I discovered Iranian poetry and music. I would spend whole afternoons in the Middle Eastern Bookshop on Museum Street, looking over the various translations of the great Sufi poets, Rumi and Hafez. It made for a potent brew, a jumble of feelings and images that somehow conjured the fantasy of a culture that was both sensuous and soulful at one and the same time.

I never went to Iran, my life went on its way, and my romantic images faded into the background. Until, that is, I was walking through those woods in 2008; around the same time that George Bush was filling the airwaves with the phrase "The Axis of Evil." When the words The Other Iran came into my mind, I knew it was the next book I should write. My purpose would be to show the human side of a great and ancient culture that was being painted black by the Western media. I also wanted to discover whether my youthful images had any semblance of truth in them.

A few months later I was on a plane to Tehran. I spent a total of two months in Iran, traveled everywhere, and discovered that the Sufis and their ecstatic practices, the glorious architecture, the wonderful food, the deeply soulful music, the genuine warmth and hospitality of the people -- none of it was a figment of my imagination. It was a part of everyday life in Iran.

But it is also true that on my way out of the country, in early 2009, I was seized by the security services and taken back to Tehran for interrogation. For two days they grilled me with the same questions over and over. Finally they said I had a choice: I could go to Evin Prison for several years on a charge of spying, or I could work for them. They wanted me to report on the activities of American and British non-governmental agencies who had interests in Iran. I said I would happily work for them. They took a photo of me shaking hands with the senior security agent, left me to stew for a couple more hours, and then finally took me back to the airport and put me on a plane to Dubai. The address they gave me to report to them was shadowoftruth@gmail.com

A few months after my book on Iran came out in 2011 (no, I do not work for the Iranian Security Service, and never have) someone called Jason Rezaian came to my door. He was an Iranian-American, a freelance journalist who divided his time between his home in the Bay Area and Tehran. His father had owned the well-known carpet store in Mill Valley, and Jason had come to offer me, a neighbor, the gift of a carpet in gratitude for my book. He was genuinely grateful that someone had shown the beauty of the culture he loved in a time when it was being cast as the devil.

Right now, Jason himself, and his wife, Yaganelli Salehi, a journalist for the Dubai newspaper, The National, are themselves in captivity somewhere in Iran, probably in Evin Prison. They were arrested on July 22, more than two months ago, with no charges made public against them. In the time since he gave me the gift of a carpet, Jason was made a correspondent in Tehran for the Washington Post, but he was always politically neutral in his reporting and everyone who knew him spoke of his passion for Iran. As the Laura Secor said in an op-ed piece in the New Yorker on August 15,

If the Islamic Republic can't tolerate Jason Rezaian, one might wonder whether it can tolerate any foreign media at all. Moreover, President Hassan Rouhani came to power a little more than a year ago, promising a new era of openness. But, since then, the number of journalists imprisoned in Iran has actually doubled, according to the International Campaign for Human Rights in Iran, from thirty-two to sixty-five.

Secor is certain that the couple's detention is an attempt by the judiciary, which is independent of the government and ruled by hardliners, to embarrass and harm Rouhani while he is attempting a rapprochement with the West over the nuclear issue. The old guard does not want any rapprochement. On the contrary, they want to widen the rift between Iran and the West so as to paint Iran as the proud defender of its values and independence. So far they have the upper hand, and Rouhani has seemed powerless to do or say anything in support of Jason or any other journalist languishing in Evin Prison.

I only spent two days in detention in Tehran, but it gives me a small hint of the terrible pressure Jason and his wife -- who will certainly have been separated -- are under right now. They will be subject to mental, and probably physical abuse, and they live daily with a destabilizing uncertainty. Jason Rezaian is no spy, and it is tragic that our government seems unable or unwilling to do anything to prevent him and his wife from being pawns in a political game. The Iranian authorities, however, are not the Iranian people. 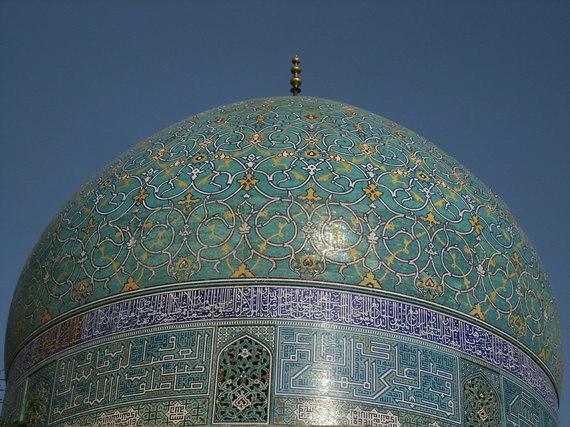 Saved By Beauty: Adventures of an American Romantic in Iran. Roger Housden