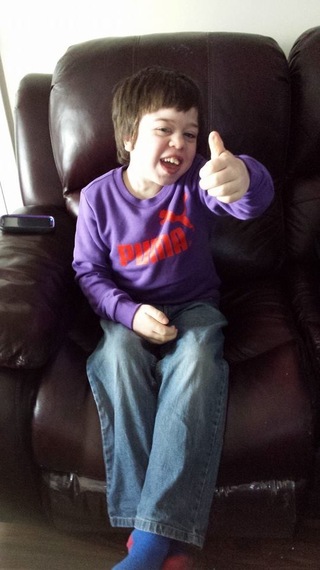 If you are a parent reading this, or an aunt, uncle, grandparent, cousin, sibling, friend, school teacher, a GP, a nurse, a doctor or even a pediatrician I want you all to come with me on this imaginary trip.

It's not a good trip but a trip some families have to go on...

Imagine you have a beautiful little person handed to you just after birth- maybe this person is your child, a relation, a friend...you get the idea right?

Imagine watching that child grow and develop into a wonderfully bright toddler; running wild, full of questions and absolutely full of life.

Imagine you get up one morning and that same child is sitting in a corner crying...you have no idea why...they are hot and your best guess is that they are 'coming down' with something.
GP confirms what you think but tells you it's just another ear infection...that's 10 since this 2 year old was born.
"It's common enough in children his age"

The ear infection leads to a chest infection; which happens more often than not...back to the GP.
"Ah yeah, it's just a bad run of it. He will be fine."

Imagine staring at this child wondering where he got those eyes from? Those big hands from? That mop of hair from? And look at that belly? It's so round and sticks out quite a bit...

Imagine you feel something is not right but you cannot express it accurately enough to the GP. You try though, you try really hard ...

"I think he has hearing loss, he doesn't seem to be interested in people any more or his toys and...this may sound silly, but ..but doc he doesn't look like me or his dad or..anyone for that matter"

"Right we will get the ears tested, worse case scenario he needs grommets, a lot of kiddies need them, once or twice and then they outgrown the issue, if there is one. I think he looks like any other toddler..are you getting enough rest and help at home?"

Imagine finally getting therapies such as occupational therapy, speech and language because your child does have a hearing loss but by all accounts (and according to a top Ear Nose & Throat specialists) "he will outgrow it"

Imagine you don't agree with the specialist? You really believe hearing loss isn't the answer, you had hoped it was but...but you still don't see your toddler behaving the way he once did.

Imagine watching your four year old being unable to do the things his 18 month self was able to do?

Imagine his speech declining and being told by all the specialists and therapists that this was "quite normal for children with hearing impairment..eventually he would maybe need hearing aids but once he got them he'd be much better at picking up new language"

"But he's not using his older words...he won't play with his toys..he walks funny, always on his toes and he is in and out of hospital with chest infections so so often..I don't understand how all this is because of his hearing loss"

"Well, after we get these latest sets of grommets in, we can get an assessment of need, perhaps he has a mild learning difficulty, and if these grommets don't work, this time we will have to look at getting him fitted for hearing aids, OK"

"Well, we will assess him, he could have autism...time will tell. Now, tell me are you getting enough rest? You seem very agitated"

Imagine for five years and ten months of that child's life; you spent it having conversations with doctors, nurses, family and specialists like the above ones ...

Imagine you are sitting in a hospital while that same child is now 5 years(almost 6) is being prepped for surgery...again...to get his fifth set of grommets despite the same specialist telling you he will not put in grommets more than three times on any child..yet here you are...

"Ok, we are getting him ready now and heading down to the theatre in about five minutes, we just need you to sign this consent form"

"NO.NO no no more fu*king grommets. They are not working!"

"Calm down, OK, calm down. We can discuss this after the grommets are replaced ok"

"No! I am not signing that consent form and I am not letting YOU touch him. Get me a kiddies doctor now. NOW"

Imagine your knees buckling, imagine your body shaking because you have just roared at a specialist in a packed hospital ward.

Imagine meeting a doctor who listened.

Imagine that doctor listening to even your 'silly' concern about your child's physical appearance (that child not looking like family members).

Imagine the sense of relief when that doctor responds with "Ok, I see...he has definitely got something going on other than a hearing impairment. I'm not convinced he has Autism either and to be honest I am shocked at the amount of hospital admission he has had. You are absolutely right to be concerned. Together we will figure this out, you have my word." 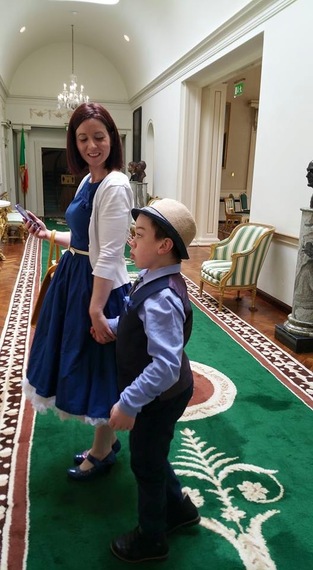 Imagine sitting with that very same doctor 3 weeks later and hearing these words:

I want you, the reader to take a minute and imagine any doctor telling you that about someone you love.

Imagine there is one day every year where you can inform people about the path you had to take to get a diagnosis?

Imagine the overwhelming feeling you would get if people showed their support for you and your loved one by simply sharing this piece or wearing blue/purple?

This May the 15th is International MPS Awareness Day.
My son has MPS - type 2- Hunter Syndrome.

Awareness is vital ...awareness in the medical fields especially.

Awareness amongst the general public is also important...there are 7 different types of MPS...

My son receives a manmade version of his missing enzyme weekly; this is not a cure but it does slow down the progression of his syndrome-- it buys us time...time to hope for a cure and time to hope that my son will be well enough to receive newer treatments as they are approved by the FDA.

So, I ask of you the reader...Imagine.

Imagine how much awareness and support you could show by wearing Blue (Ireland &UK) or Purple (Everywhere else) on this May 15th in honour of all those living and who have died from MPS...
The world went purple for a musician recently -- imagine if the world went purple for dying children?
You can share your pictures of you and yours wearing purple or blue (or even both) in honour of those living with MPS over on my Facebook page at It's Me Ethan or tweet them to me @ItsMe__Ethan to show your support and help us raise awareness and who knows, maybe even turn the world purple and blue!

Thank you so very much.

This was originally published on FamilyFriendlyHQhttp://www.familyfriendlyhq.ie/family-blog/may-15th-is-mps-awareness-day-this-mum-wants-to-take-us-on-an-imaginary-trip

More:
ParentsParenting Motherhoodawareness
Newsletter Sign Up
Raise the kind of person you'd like to know
Subscribe to our parenting newsletter.
Successfully Subscribed!
Realness delivered to your inbox

Mammy, writer,fixer of scrapped knees and broken toys and an all round Elvis lovin' Irish girl