WASHINGTON -- The Greek government, and the businesses accustomed to tussling with it, have finally agreed on a way to meet the budget targets insisted on by institutional lenders. But the International Monetary Fund, one of the lenders that forced Greece to adopt controversial new cuts over the summer in exchange for emergency loans, is rejecting the agreement and insisting instead that the burden of those cuts fall on ordinary Greeks.

The IMF has indicated it will resist the Greek government’s plans to achieve required pension savings partly through an increase in employer contributions, according to a source close to negotiations between the Greek government and official creditors. Instead, the source said, the IMF believes pension savings targets can only be reached through pension cuts of 15 percent, on average.

Although the IMF has yet to officially object to the Greek government’s plan, the source said, it is arguing that the contribution increase will make Greece’s economy less competitive.

Given the opportunity, the IMF did not deny the source’s claims. Instead, it referred The WorldPost to comments on the matter made by IMF spokesman Gerry Rice at a press conference last Thursday. Rice said at the time that the IMF was “in the process of assessing [the Greek government’s pension reform] proposals carefully and has not yet completed its evaluation.”

The IMF's intransigence is reportedly driven by the Fund’s European director, Poul Thomsen, who has long had a tense relationship with the Greek government. Thomsen is a close ally of Wolfgang Schaüble, Germany's hard-line minister of finance.

“That Thomsen is playing a not-so-constructive role is the least one can say,” the source told The WorldPost. “This position of the IMF is puzzling, and they clearly want to either leave the program or blow the whole thing up.”

Peter Doyle, a former senior manager at the IMF, who worked with Thomsen for many years before resigning from the Fund in protest over its management of the Greek debt crisis in 2012, believes that Thomsen “does not care” that there is no evidence his approach will work. Doyle notes that the pension cuts and labor market reforms already enacted have not prompted Greeks to remain working and thereby expand the economy.

“It is just an article of faith. It comes from his whole career in the Fund,” Doyle said. “His entire career has been spent working in Eastern Europe -- Romania, et cetera -- and most of the politicians there are genuinely corrupt. He gets to Greece and thinks it is just like Romania or other less developed European countries.”

Doyle posited that Thomsen may also want to lock in as many concessions from Greece as possible before debt restructuring, based on the belief that the IMF’s leverage over Greece will decrease dramatically afterward.

The government has already achieved the rest of the required savings through benefit cuts. Some of its moves have included speeding up an increase in the retirement age to 67, ending early retirement, increasing retiree health contributions and reducing the number of people eligible for a solidarity benefit targeted at poor people.

Along with the increased employer and employee contributions, the Greek government hopes to pass legislation enacting structural reforms that would homogenize and streamline the currently disparate national pension funds into one system with one benefit formula by 2017.

The Greek news outlet Ta Nea reported on Tuesday that the IMF is considering asking Greece to overturn a law protecting private sector employees from mass layoffs, and has already discussed the prospect with other institutional lenders.

The source close to discussions said that the IMF is also discussing demanding wage cuts for public sector employees.

The IMF denied that it has any plans to bring up labor market reforms ahead of schedule.

"There have been no recent discussions between IMF staff and the Greek authorities on labor market reforms," said IMF spokesman Andreas Adriano.

Officials affiliated with the European Commission, the governing body of the 28 European Union member nations, expressed concern about the IMF’s negotiating stance, according to information the source close to negotiations shared with The WorldPost.

The commission views the Greek pension reform proposal favorably and worries that additional pension cuts will harm the country’s economy, the source said.

The commission is also confused as to why the IMF would raise the issue of labor reforms before the appointed time, and is worried that those demands risk undermining the broader reform effort.

The IMF’s objections raise the prospect of an impasse on the last stage of reforms that Greece must implement to begin discussions of debt restructuring -- a process that the indebted nation argues is essential to its economic survival.

Greece agreed to pension savings of as part of its July 12 agreement with the IMF, European nations and the European Central Bank, securing the country a new round of bailout loans worth some $95 billion.

The accord did not specify how Greece should reach those goals.

In May 2014, a court in Portugal, another recipient of eurozone bailout funds, ruled pension and wage cuts unconstitutional -- and Portugal's creditors were willing to allow the country to achieve its fiscal targets through other means.

The source close to negotiations warned that forcing the Greek government to achieve pension savings through a 13th round of benefit cuts, rather than through contribution increases, “can lead to social unrest and will jeopardize the sustainability of agreement.”

Indeed, there are already signs of the political difficulty the Greek government will have in implementing even its preferred slate of pension reforms. Workers continued to protest the structural pension reforms in demonstrations across Greece on Tuesday.

Greek Prime Minister Alexis Tsipras said in a statement provided to The WorldPost that the government's pension reform proposal reflects a commitment to equitably distribute the austerity measures in the July 12 agreement.

"The Government has submitted a particularly ambitious structural reform proposal for the social security and pensions system that reallocates the burden from the lower to the upper income levels and ensures both sustainability as well as justice in the long run," Tsipras said.

The Greek premier said the onus was now on the country's creditors to hold up their end of the bargain.

"Greek society is ready to accept a daring and difficult reform, to the extent that it is fair and that it ultimately lets us see the light at the end of the tunnel," he said. "It is now up to the institutions to prove that they, too, share the same goals and the same desire."

Tsipras also emphasized in his statement that Greece’s pension system has become an essential source of income for Greeks of all ages in the wake of a debt crisis and years of austerity that have saddled Greece with an official unemployment rate of nearly 25 percent.

Pensions remain vital to cash-strapped Greeks, even though they have, on average, already been cut by 30 percent since 2010. Nearly half of Greek households rely on a monthly pension check to pay their bills, according to a small business survey published in January 2014, suggesting that many younger Greeks depend on help from grandparents and other relatives.

The July bailout agreement was the third loans-for-austerity package given to Greece by the IMF, European nations and the ECB since 2010.

Economists across the ideological spectrum have criticized the approach of Greece’s creditors, arguing that the fiscal austerity imposed on Greece in exchange for the bailout loans has prevented the country’s economy from recovering. The creditors, critics say, have also failed to acknowledge that the bailouts were originally aimed at saving the German and French banks with enormous amounts of Greek debt on their books.

When it looked like Greece was on the brink of being forced out of the eurozone for resisting yet another round of dramatic spending cuts and tax hikes over the summer, the IMF publicly positioned itself as the moderate broker among Greece’s creditors.

Specifically, the IMF released a report in early July -- over European objections -- asserting that Greece would be unable to repay its debts without substantial restructuring.

But the IMF only released the report reluctantly, at the insistence of the U.S. Treasury Department, according to a source familiar with the decision.

Doyle, the former IMF official, argues that the differences between the IMF and Germany have ultimately been superficial, since the IMF has failed to use its leverage to shield Greece from an unsustainable debt agreement.

“It is pure fiction that the IMF is more dovish than Germany,” Doyle said. “That has been great public relations on their part.” 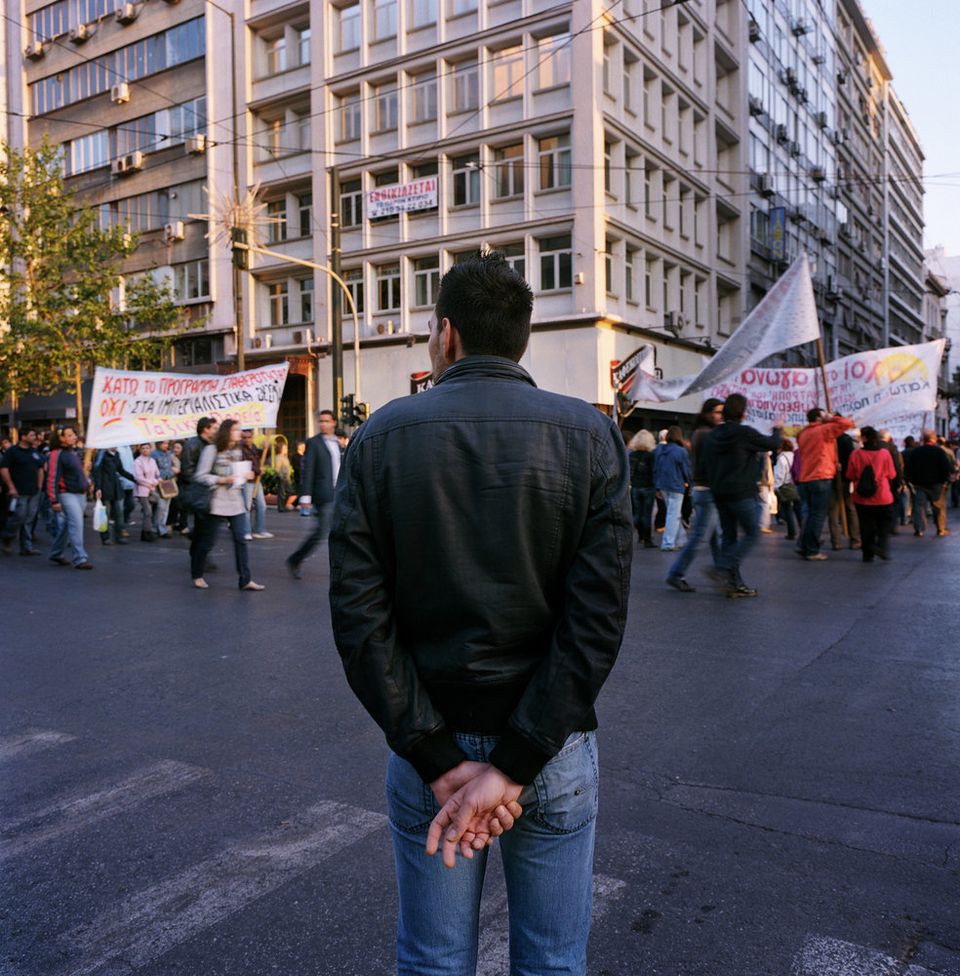