LOS ANGELES, Feb 15 (Reuters) - As the story of a little-known British World War Two code breaker gears up for the Oscars as one of the top nominees, "The Imitation Game" has found a larger cause to fight for the rights of persecuted gay men.

Nominated for eight Oscars on Feb. 22, "The Imitation Game" tells the story of mathematician Alan Turing, who worked with a secret group of government cryptologists during World War Two to break Nazi Germany's wartime code and saved countless lives.

Turing, played by Benedict Cumberbatch, went uncredited for his work and instead was persecuted on charges of homosexuality, a crime in 1952, and died a broken man in 1954. He was posthumously pardoned in 2013 by Britain's Queen Elizabeth.

The film, distributed by The Weinstein Co, has sparked off a petition by the Human Rights Campaign, an organizing advocating for equal rights for the LGBT community, to pardon some 49,000 homosexual men charged under Britain's gross indecency law that was repealed in 2003.

It has attracted more than 330,000 signatures including Cumberbatch and Keira Knightley, who plays female mathematician Joan Clarke, as well as notable CEOs including Google's Eric Schmidt and Yahoo's Marissa Mayer.

"Alan's own treatment by history had been so unfair," said Graham Moore, Oscar-nominated for his "Imitation Game" script.

"We always hoped we could create a dialog around these issues of the treatment of gay men in society, about the historical persecution reaped upon them, and getting to be a part of these kinds of conversations is even more important."

Made for a budget of $33 million, according to BoxOffice.com, "The Imitation Game" has grossed more than $155 million worldwide since its November release.

It earned Oscar nods for Cumberbatch, Knightley, director Morten Tyldum and the coveted best picture prize, where it will contend against frontrunners "Birdman" and "Boyhood."

Tyldum, the Norwegian director of 2011's "Headhunters," said while Scandinavian filmmakers such as himself hone their talents on American genre films, they bring a fresh esthetic for underdogs such as Turing to Hollywood films.

"We're very skeptical of people who are too perfect. We like flawed people," Tyldum said. "The more shaded, flawed characters that are struggling, I think there's something very relatable about that."

Much of the film focuses on Cumberbatch's portrayal of Turing's nuances, vulnerabilities and strengths as an outcast among his peers.

Both Tyldum and Moore, who won best adapted screenplay at Saturday's Writers Guild Awards, faced initial concerns from film financiers that a film about an unknown historical figure who commits suicide would be marketable to audiences.

"I love when people say 'Imitation Game' is such a crowd pleaser," Tyldum said. "Yes, it's a crowd pleaser but the guy kills himself. We've achieved something, it's a beautiful challenge."

Moore said he relished the challenge of making "an unmakeable project."

"The whole goal of the film was to bring Alan Turing's story to a crowd that wouldn't otherwise have been exposed to his life and his work and his person." 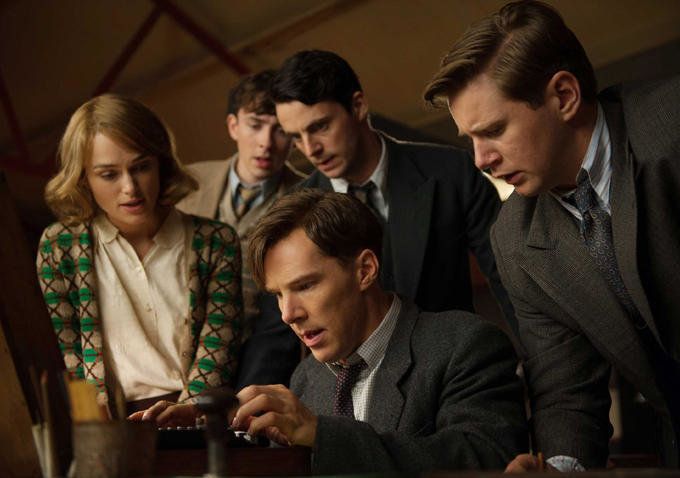