As the 2016 presidential campaign kicks off, the economy is growing and Americans are getting back to work. However, for far too many people plotting a course from the working class to the middle class requires navigating dangerous waters filled with financial icebergs. Responsible financial services are key to helping families advance, but predatory lending products are carefully designed to sink those trying to achieve greater prosperity in a cycle of unending debt. While the immediate cost of a predatory loan is steep, our research shows it is just the tip of the iceberg. 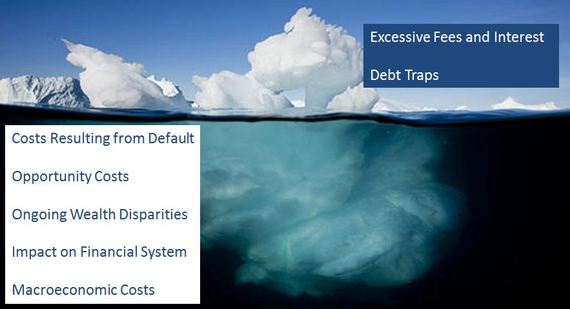 Since 2012, the Center for Responsible Lending (CRL) has been measuring the effect of different predatory lending practices in our State of Lending research series. We have shown that predatory mortgage terms result in higher rates of foreclosure; that certain auto lending practices result in racial discrimination; and that trapping people in debt is the payday lending business model. Our final chapter, The State of Lending in America and Its Impact on U.S. Households: Cumulative Costs of Predatory Practices shows lending abuses are inter-related and that they set off chain reactions that have long-term consequences, derailing economic opportunity for millions of Americans and weakening the U.S. economy.

Abusive loans do not exist in a vacuum and borrowers who fall victim to one abusive loan are more likely to fall victim to another. Our report finds that 54.5 percent of those who have had a car-title loan have also had a payday loan, and 62.8 percent of consumers who recently used a payday loan also have a credit card. The costs of abusive loans compound over time because loans with harmful features lead more often to defaults, bankruptcies or the loss of a critical asset such as a car or home.

A default has additional repercussions as well, for example, hammering a consumer's credit score. With poor credit, consumers will pay a higher interest rate on major purchases, if they can get credit at all. Our report finds that, after going through foreclosure, a typically previously secure borrower will pay an extra $3,760 on an auto loan and almost $55,000 more on a mortgage because of damage to their credit score. Many potential employers check credit reports, and so do many landlords. Financial services can be a powerful force for good helping Americans invest in their future by growing a business or going to college. Abusive loans make it more expensive for Americans to invest in themselves, robbing them of economic opportunity. 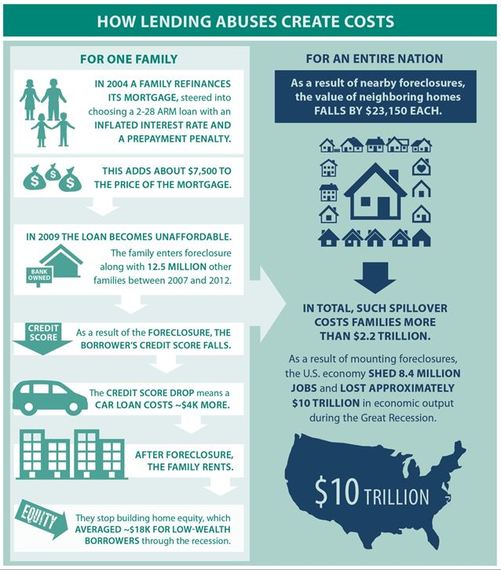 Lower to moderate income communities and communities of color are disproportionately affected by abusive loans. African Americans and Latinos pay more for auto loans than white borrowers with the same credit profile. Lower-income mortgage borrowers and mortgage borrowers of color were unfairly targeted for abusive loans, and they bore the brunt of the mortgage crisis. Now, these same communities are being denied mortgage loans at a time when interest rates are at historic lows. These two examples represent tens of billions of dollars in lost wealth. Abusive loans and their long-term consequences translate into sharp disparities in economic opportunity by depleting the wealth of entire neighborhoods and communities. The median wealth gap between people and color and whites is more than $100,000 per household, but all Americans are affected because the widening wealth gap weakens our economy.

Financial regulations that ensure a fair marketplace should be a priority for the next President, and voters should ask for answers during the 2016 campaign. Public policy has played a critical role in correcting abuses and encouraging responsible credit that helps working families. The Credit CARD Act, passed in the wake of the financial crisis, eliminated more than $4 billion in abusive fees and saves consumers $12.6 billion annually. Today, the federal Consumer Financial Protection Bureau (CFPB) is working toward addressing many abusive lending practices, such as predatory payday lending, which drains $3.4 billion from our economy each year. Our recent history provides ample evidence that the CFPB should stay the course, and that continued government oversight of lending is needed. During the build-up to the Great Recession, CRL called for an end to abusive subprime mortgage loans, such as those with "explosive" adjustable rates. Oversight could have limited the enormous damage done by reckless and predatory lending.

These facts make a powerful case that more researchers should look at the long-term, inter-related chain reactions caused by abusive loans. They also underline the importance of the CFPB because it has the authority to address abuses across a range of products. We all want an economy where people who work hard and play by the rules can get ahead. To do that we need to eliminate the financial icebergs that are still sinking working families that deserve access to responsible loans that help them build wealth and chart a course to financial success and stability.

Mike Calhoun is the President of the Center for Responsible Lending, a non-partisan, non-profit which works to protect homeownership and family wealth.