Illinois takes pride in its corn production. This can be seen in the fact that sweet corn is even the state's official vegetable. (However, for the record, the Whole Grains Council and the Illinois Department of Agriculture label corn as a grain, not a vegetable.)

The crop makes up a large portion of Illinois' 27 million acres of farmland, says the Illinois Department of Agriculture, with soybeans by its side. Much of the corn produced in the state is processed not very far away from its source--Chicago is the No. 1 food processor in the country, with $180 billion in sales per year. Corn sales alone generate about $10.3 billion annually, says the Illinois Department of Agriculture.

With about 75 percent of Illinois' total land area devoted to farmland, that adds up to a lot of corn. The Associated Press reports that while Iowa is still the top corn-producing state in the country, the designation of top-producing counties belong to Illinois communities.

The Illinois Department of Agriculture reports that with an average 10- to 12-degree difference in temperature between the northern and southern tips of Illinois, corn production varies throughout the state. Which counties produce the most in the state? Are there regions of the state that have conditions more conducive to yielding bigger harvests?

The United States Department of Agriculture released the 2014 final corn production numbers for Illinois by county, showing that in total, the state saw nearly 12 million acres of land planted with corn crops, yielding about 2.35 billion bushels of corn, or an average of about 200 bushels per acre. For comparison, the U.S. produced 12.4 billion bushels as a whole in 2011. (One bushel of corn weighs between 35 and 70 pounds, depending on the type.) The Wall Street Journal reports that Illinois' 2015 corn crop is expected to drop about 14 percent to about 172 bushels per acre instead of 2014's 200 bushels per acre.

These Illinois counties are among those to have harvested the most bushels of corn (in millions) in 2014, according to the USDA (click on the map to see the list of all 10 counties): 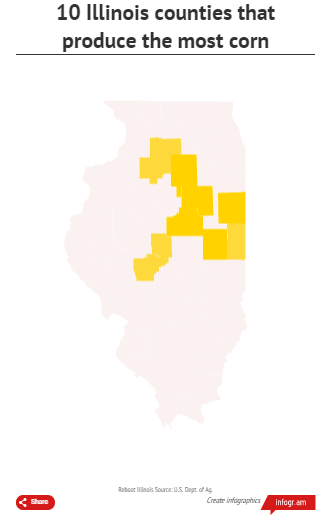 To see the five counties that harvest the most bushels of corn in Illinois, as well as some amazing corn facts you have to read to believe (including that corn can grown three to four inches in one night!), check out Reboot Illinois.