On Tuesday, a three-judge panel on the 5th U.S. Circuit Court of Appeals upheld an injunction keeping President Barack Obama's Deferred Action for Parents of Citizens program from being implemented. DAPA would shield an estimated 4.1 million undocumented immigrants with family ties to U.S. citizens from deportation and allow them to work legally in the United States for a renewable, three-year period.

The ruling further delayed what Obama intended to be his signature achievement on immigration. But for many of the immigrant rights activists who pressured Obama to act, the fight over DAPA is just one element of a much larger effort to completely upend the system of immigrant detention.

The view that immigrant detention needs rethinking has gained wider traction in recent months, following the Obama administration's expansion of family detention. Roughly 68,000 unaccompanied minors crossed the border illegally into the United States last year, as did a similar number of children and female guardians traveling together. The vast majority came from the violence- and poverty-plagued Central American countries of El Salvador, Honduras and Guatemala, and they generally presented themselves directly to border authorities, in hopes of being treated like refugees and allowed to pursue asylum claims.

The Obama administration responded by ramping up bed space for families in immigrant detention, breathing new life into a much-criticized practice that his administration had all but discontinued back in 2009. Officials argued that detention would act as a deterrent to other would-be migrants.

But locking up families in detention has sparked a backlash from immigrant rights groups, as well as from establishment politicians. On Wednesday, a group of 136 House Democrats called on the Obama administration to end family detention, noting that the vast majority of whom are pursuing asylum claims.

The New York Times took the criticism a step further, arguing this month in an editorial that the U.S. should end immigrant detention altogether -- a view long espoused by immigrant rights groups.

"Of all the malfunctioning parts of the country's broken-down immigration machinery, probably the most indefensible is the detention system," the Times' editorial board wrote, adding: "Detention is intended to help enforce the law, but, in practice, the system breeds cruelty and harm, and squanders taxpayer money."

Here is why many people want the U.S. to stop detaining undocumented immigrants: 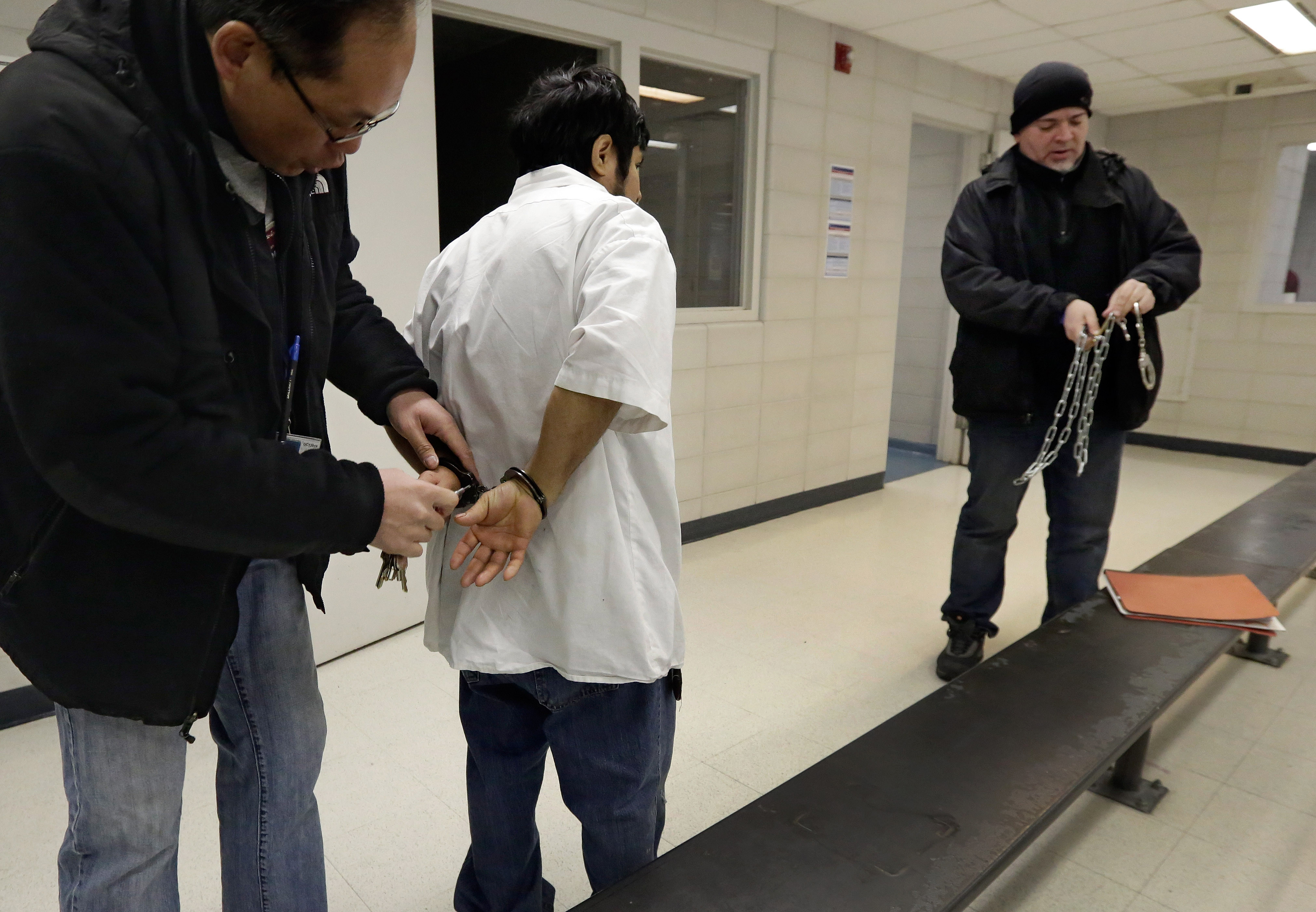 In this March 3, 2015, photo, Immigration and Customs Enforcement officers process an arrestee at their New York headquarters, after a series of early-morning raids. (AP Photo/Richard Drew)

Most people in immigrant detention are only guilty of residing in the United States without authorization -- a civil infraction, not a criminal one. Civil detention, consequently, serves a different legal rationale than prison. As the Times points out, immigrant detainees aren't being punished for a crime -- they're being held by the government to make sure they show up at court for deportation proceedings.

Immigrant rights activists have long held that the entire immigrant detention system is so cruel it should be abolished. It essentially treats undocumented immigrants -- the vast majority of whom cross into the United States simply looking for work or to reunite with family, or because they're fleeing violence or poverty in their home countries -- as if they are criminals.

"While we expected the continued delay of expanded deferred action as the courts continue to play political games with our families, the president's hands are far from tied to stop the crisis of deportations our families continue to face," Carlos Garcia of Puente Movement, an Arizona-based human rights group, said Tuesday after the 5th Circuit upheld the injunction against DAPA. "Justice for our community starts with an end to police-[Immigration and Customs Enforcement] collaboration and immigration detention." 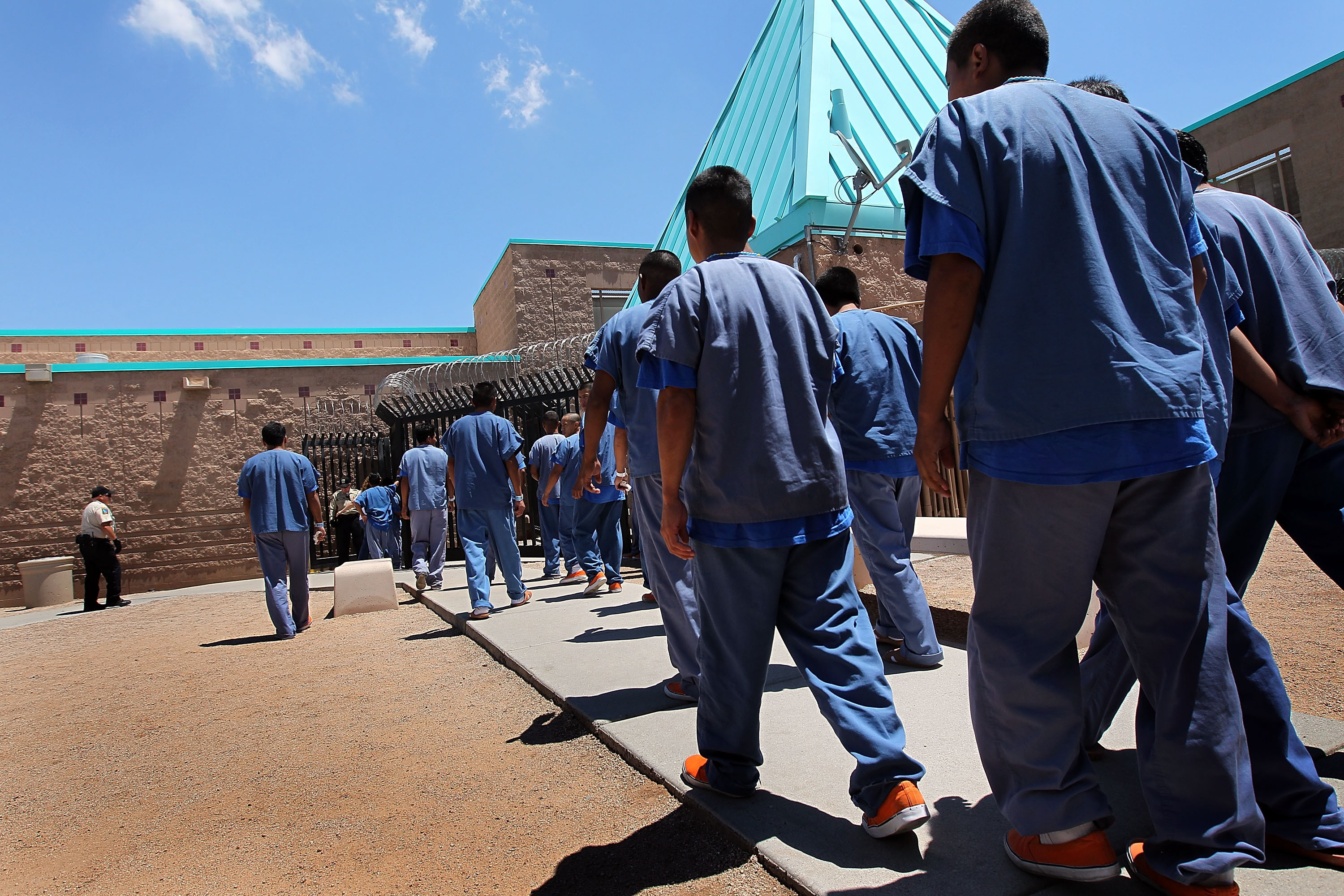 Detained immigrants walk back to their housing units following lunch at the U.S. Immigration and Customs Enforcement (ICE) detention facility on July 30, 2010, in Florence, Arizona. (Photo by John Moore/Getty Images)

One of the great ironies of the U.S. immigration debate is that many immigration hardliners are conservatives who say they favor small government and oppose wasteful spending. The 2014 budget request for immigrant detention operations amounted to some $1.84 billion, or about $5 million per day, according to the National Immigration Forum. Immigrant detention costs roughly $168 per person per day, according to the American Civil Liberties Union. The cost for family detention is nearly double that, at $298 per person. In contrast, New York -- which has a larger budget for public education than any other state -- spends roughly $110 per day to educate a public school student.

Most undocumented immigrants aren't detained because they present a public security threat, but in order to compel them to appear in court while their deportation cases proceed. As groups like the Lutheran Immigration and Refugee Service and the ACLU have pointed out, there are far less restrictive and less expensive ways to achieve that goal.

Alternatives to detention run the gamut from release on bond, to requiring periodic check-ins with authorities, to more invasive methods like ankle monitors. The costs to implement these alternatives range from 17 cents to $17 per day per person, according to the ACLU. 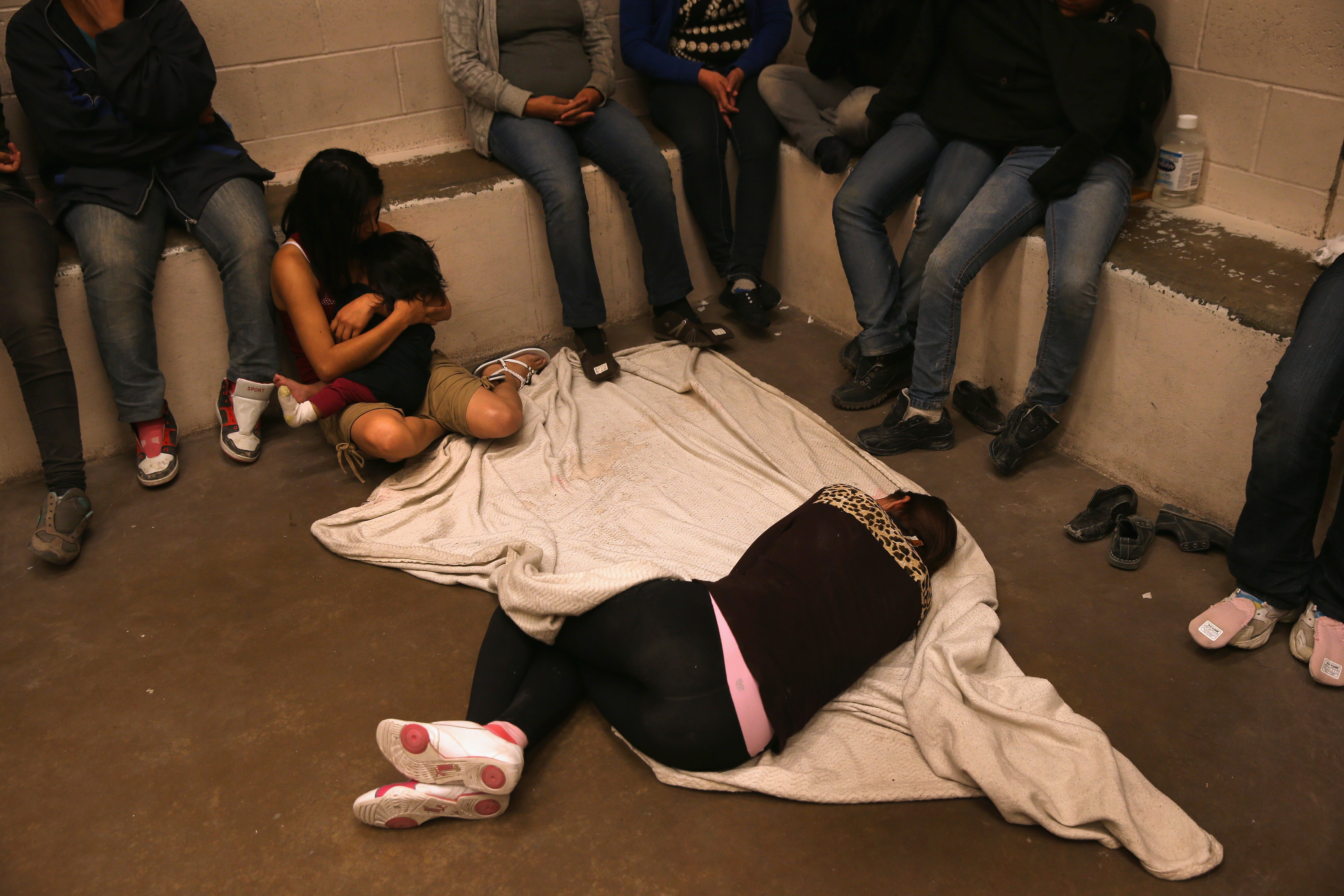 Women and children wait in a holding cell at a U.S. Border Patrol processing center after being detained by agents near the U.S.-Mexico border on September 8, 2014, near McAllen, Texas. (Photo by John Moore/Getty Images)

Private prison companies operate 62 percent of the immigration detention system, according to a report published earlier this year by Texas-based advocacy group Grassroots Leadership. That figure is up from 49 percent in 2009. The report argues that privatizing detention creates incentives for corporations to lobby in favor of harsher immigration laws.

GEO Group, the second-largest private prison contractor in the country, says it does not lobby on immigration policy, but the company clearly understands where its interests lie. In a filing with the Securities and Exchange Commission this year, GEO Group explained that a more lenient immigration system would undermine its business model.

In particular, the demand for our correctional and detention facilities and services, electronic monitoring services, community-based re-entry services and monitoring and supervision services could be adversely affected by changes in existing criminal or immigration laws, crime rates in jurisdictions in which we operate, the relaxation of criminal or immigration enforcement efforts, leniency in conviction, sentencing or deportation practices, and the decriminalization of certain activities that are currently proscribed by criminal laws or the loosening of immigration laws.