Almost 1,000 small business owners and workers, mostly of Chinese and Korean descent, are traveling to Albany for the first time on February 29, 2016. For most of them, this is their first taste of advocacy and civic engagement at the state capitol. They will be supporting a new legislation, Transparency in Enforcement Act, that will require state agencies to track and report the race, gender, and location of the owner of every business it inspects and penalizes.

Mostly first generation immigrants, these owners and workers have invested everything they have into their small businesses. They've bought into the alluring American Dream, one that promises an equal opportunity for success for those who work hard and abide by the rules.

Unfortunately the immigrant small business community has unwittingly become the safest sacrifice for an apathetic governor in need of some quick political points to score with labor groups. Under the guise of protecting workers, New York Governor Andrew Cuomo used his unilateral emergency powers to target, punish and make examples out of the predominantly Asian-owned nail salon industry, even as no data exists to support a higher level of misconduct or mistreatment of employees in these businesses compared to others.

As a historically unorganized and un-vocal group of immigrant-owned small businesses, nail salons are the perfect targets. Even as the bill I sponsored and passed in the state legislature curtailed the governor's ability to selectively police the nail salon segment of the greater beauty enhancement industry, the governor bypassed the law, using emergency regulations to impose unreachable mandates to just this one community. The administration's selective crackdown was based on a political calculation that few groups would come to the defense of immigrant-owned small businesses.

When immigrant nail salon owners, who were not native English speaker, pled their case with the governor's office, they were often intimidated and mocked by the governor's staff. In one meeting, the Governor's own counsel yelled, "How dare you speak up! We could shut you down tomorrow if we want!" These small business owners surely received less respect and attention than the other powerful industries when they lobbied against overregulation.

The same independent investigation and careful diligence that usually occurs before the government implements any new business regulation is casually bypassed. The immigrant nail salon owners' difficulty or inability to obtain sensibly priced wage bonds due to lack of credit history was simply ignored. The fact that immigrant business owners are the biggest providers of employment opportunities to immigrants is discredited. The catastrophic consequences to immigrant workers when the nail salon industry is decimated due to unattainable government mandates is brushed aside. Clearly protecting immigrant workers was less the objective than scoring a political point.

After nine months of targeted crackdowns by the state, 54% of nail salons have laid off employees and 17% have closed based on an industry survey of 194 stores. The demise of the industry is also supported by numerous anecdotes reported to my office on a daily basis. Hopefully the bill I introduce, co-sponsored by Senator Jesse Hamilton, will result in more transparency to the state's inspections and prevent selective enforcement of the law to immigrant minority-owned businesses.

Growing up, my parents ran a small grocery store in upper Manhattan. They worked 14 hours a day and never took vacation. They were powerless to fight back against years of targeted enforcement by government agencies, and had no choice but to file for bankruptcy. Look around today and you rarely see the Korean-American owned grocers that used to populate our neighborhoods. Today, when you stop by the corner of where my family once owned our piece of the American Dream, there is a big chain retailer. I often wonder if all of my parents' sacrifices and hard work could have led to success if only they had a fair shot. 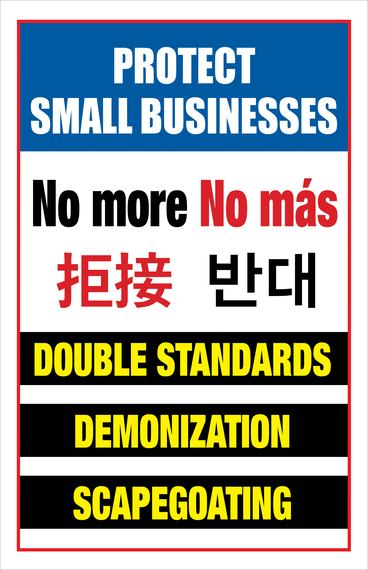