The Choices We Make

As a new political season is upon us, its consequences promise to introduce radical political changes. They go beyond one or the other party coming to power: the Economist Intelligence Unit, a leading think-tank, included Mr. Trump's potential presidency into 20 greatest threats to global well-being. Therefore now more than ever we need to review the situation from multiple perspectives multiple times -- and then get off the couches and vote. Clearly, the US politics on both left and right has radicalized to such a degree that today every American citizen taking a stand can help define the future of the entire country and even the world.

Especially for the immigrant women as the most vulnerable demographic, making the right choices is existential. When interviewing prominent first-generation immigrant women for the upcoming book, I learned it isn't easy to win their minds: sophisticated, contributing to America's well-being and culture, they are part and parcel of American minorities whose votes cannot be taken for granted. It is for them - and other politically-responsible people - that I review our choices and ask the readers to share their thoughts before the big-leap in November.

Donald Trump, once described as merely colorful, rich, and self-serving - and dismissed as a serious contender - has now emerged as a mighty political player and Republican front runner. Media has long underestimated Mr. Trump, hoping that his serial insults of women and a label of a racist/fascist would bury him. They did not, and the pundits started looking deeper to explain his popularity. It appeared that his magic message is not anti-immigrant or even anti-establishment: it is anti-free-market. This is why millions of angry Americans whose manufacturing jobs were shipped overseas stand up for him. Yes, globalization and free-market concept, so unanimously adopted by politicians and economists of all stripes, do hurt--and Mr. Trump's base believes that his powerful persona will be able to turn the tide bringing their jobs back. Thomas Frank elaborated it quite convincingly: Trumpism coordinates best with "deindustrialization and despair, with the zones of economic misery that 30 years of Washington's free-market consensus have brought the rest of America."

Thus, the real reason for Mr. Trump's base snowballing is his tapping people's economic woes. Playing the anti-political-correctness tunes and catering to people's prejudices might be reason three at best.

Let's look to the left of Trumpism, at the Democratic presidential contenders. The extremely engaging Senator Bernie Sanders is a phenomenon in his own right: a self-proclaimed democratic socialist calling for mass political activism (and naming it "revolution") became broadly popular with the youth and the disgruntled blue-collar workers. His ideas are far from the "extreme socialism" as we know it. Indeed, Senator says it's possible to narrow the inequality gap in a European or Canadian style, making medical care and education free for all those eligible. However, some analysts state his plans lack reality-rooting, just like Mr. Trump's. Interestingly, these presidential candidates both deplore free-trade.

Hillary Clinton has a special place in the hearts of all American women and many think it's high time to have a woman-President, as 63 nations already did. Importantly, she is also considered a "formidable and in some ways admirable candidate," if flawed--but aren't we all? Today, Mrs. Clinton appears as a battered-but-unbowed, compassionate matriarch, a modern image for the American President. Still, despite accumulated political skills and hard-to-get government acumen that she brings to the table, it is hard to get the "likes," although she does oppose the Trans-Pacific Partnership, a trade deal she once advocated for.

Evidently, the united front of the progressivists will need to neutralize the anti-free-trade message of Mr. Trump - emphasizing really effective solutions.

Now meet one of the prominent immigrant women and see why their votes are precious.

Ginny Gong, from China: From Ironing Board to Corporate Board

Ginny is used to wearing many hats in her eventful life: an immigrant child growing up in the back of her parents' laundry, she became, in turn, a math teacher/administrator, an author, a speaker/facilitator, a TV talk show host (pictured), a beauty queen, a community leader at the local and national levels, a corporate board member, and the 4-term National President of one of the oldest civil rights advocacy groups in Washington, DC. 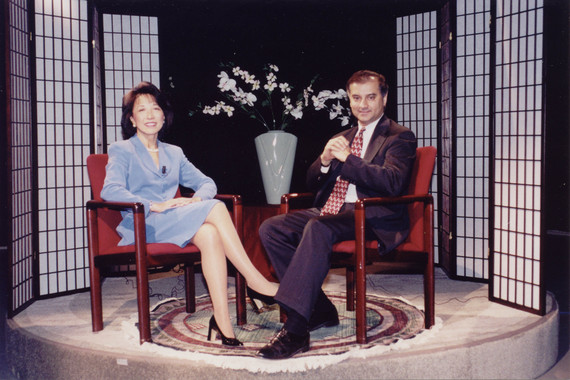 The first Asian-American appointed to head a government agency in Montgomery County, MD, Ginny serves as Director for the Office of Community Use of Public Facilities, managing the community's use of the County's public facilities and its multi-million Enterprise Fund. She is credited with establishment of the first New Americans Welcome Center serving the County's diverse immigrant community; photographed as the face of Asian-American women over 50 in AARP-1st national Asian-American outreach campaign; and elected to head OCA, a national Asian-American organization with 80 chapters/affiliates nationwide. That's where Ginny's influence is coming from.

Her memoir, From Ironing Board to Corporate Board, describes Ginny's perpetual dual-culture negotiations of a person who is very American in mindset but Asian in appearance and spirit, referring to her "heart of an immigrant and mind of a native," as descriptive of her integration into mainstream American culture.

Ginny's gotten all she has wanted in life: a higher education, rewarding jobs with decision making authority; three kids raised to be good people; beautiful grandchildren, loyal friends, and national recognition as a community activist. She truly embodies the American Dream come true.

Routinely a person of great conviction, Ginny's voice will be heard in this presidential election with the welfare of America she loves at stake. For her it's always been a vote for the most qualified person, not necessarily the party or the gender. Catch her if you can, politicians!

Think Before YOU Leap

America has never stopped being great--but we can certainly elevate our country to more greatness. So, let's continue considering the political choices on offer, before leaping into the new America in November.