Aliens at the Gate!

People fear aliens. They fear aliens because they fear unpredictability: unpredictability makes people uncomfortable. This is at the root of what many in the public feel towards minorities: they are different, and people may be wary of them. To reduce this unpredictability, they create stereotypes boosting their behavior -- prediction confidence -- and partially dismissing their fears. People sometimes give names to stereotypes, such as "women's logic."

Attitudes towards immigrants are often of a similar nature, amplified by their thick accents, different behavior, body language, you name it. Many people's perceptions of immigrants differ from their perceptions of the rest of minorities because of the public's perceived power to prevent immigrants from coming. Many conservatives ride this wave, playing the "aliens" card.

It never ceases to amaze me how the media interprets the Census discussing a "model minority," the most successful ethnic group. The term is controversial at best, and the "nominees" are ever-changing. It's like asking, "Magic mirror on the wall, who's the fairest one of all?" Who needs this kind of information except the wicked Queen? Needless to say, the model-minority discussions sparkle hot debates. To me, these debates--along with deliberations on the mounting numbers of immigrants--distract us from some core concerns. Indeed, there exist better means for identifying national issues than asking magic mirrors or mulling the numbers - such as tapping commonsense.

So far, split-up lines between legal immigrants and minorities have been ill-defined: once a documented immigrant lands in America, he/she becomes just another drop in the lake of the existing ethnic minority, with the language-culture skills to grow on the go. Presumably, the first-generation immigrants come to America by choice, while the established minorities have been born in the land--but integration is only a matter of time. The real issue runs deeper. The wildly diverse immigrant and minority groups have one common issue, awkward like an elephant under the table: they still remain societal underdogs facing attitudes of condescension and scapegoating. One may be a big hero, but it's hard to get the "likes." For lack of a better word, let's call this defined issue, "gaining recognition."

Obstructing their progress, this attitude problem has huge significance. It cannot be resolved by policy-changing. It's so deep-rooted--plus provoked by certain political instigators profiting from easy popularity--that it requires long-term concentrated effort by both immigrant and minority groups. Unfortunately, they seldom act together, which is counter to common sense.

Instead of sitting on different fences, immigrant and minority organizations need to coordinate/unite their efforts with one strategic goal in mind: converting people's perceptions and gaining merited recognition. One commonsense tactical goal may be advancing children's education.

Why education? Remember Sergei Brin, a co-founder of Google, who immigrated to the US at age 13? He got a good education, and we got Google. But other little Brins - of ethnic minorities - may have the similar talent, achievement-orientation, penchant for risk and innovation, and the same immigrant creativity originating from their double-culture perspective--but no funding for the right education. If we help them - so that not only the well-prepped children of the rich could become American meritocracy - America's future will be broader-based and steadier. As statistics of immigrant/minority communities are swelling, it makes common sense to swell their quality/excellence too.

Immigrant, Minority, and Great Achiever: Three in One

Here's one case study from my upcoming book, of how immigrant creativity, minority forte, and global success unite to give us a praiseworthy role-model to follow.

Josie Natori, from the Philippines - Proud to Be Asian-American

Sharp & bold like her lingerie designs, Josie Natori, the founder and CEO of the Natori Company, is proud of her roots. Josie went a long way reinventing herself from an island girl, to college student, to Merrill Lynch VP, to famous fashion designer. Ever since coming to America to study, she was able to turn what others could perceive as her disadvantage - being an Asian immigrant and a strong woman - to a unique advantage. How? In several ways:

1. At Merrill Lynch, she's been adding the valued diversity touch to the firm's all-male top team (pictured): "Coming from the Philippines, one of the few matriarchal societies in the world, I never thought I could be discriminated [against]--and never was! ... I got promoted on merit. I used to say that I counted as two--being a woman plus being an Asian. I made being an Asian woman an asset instead of a liability, and was surprised that they make such a big deal out of this issue." 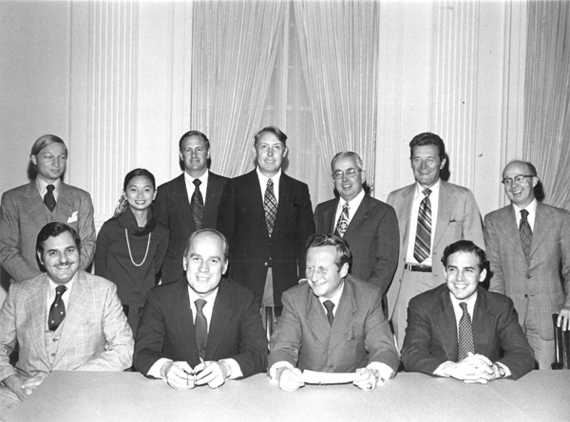 2. After founding the Natori Company, she interweaved the exquisite Asian aesthetics into her luxury lingerie and home items design-- building a distinct brand, blending the visual appeals of both the East and the West, with non-stop global success. She's happy to give back to society, supporting progressive projects, young talent and women.

3. Josie displayed similar common sense in her private life: "I am too advanced and bold in my free spirit to have married an Asian-born Asian; this is why I married a Japanese-American born in the US: he still had the Asian values but grew up here and was more assimilated in the US--so he accepted a strong woman as his wife." (Pictured with husband Kenneth Natori and grandchildren of Philippine-Japanese-Jewish-Polish-Mexican descent). How wise! 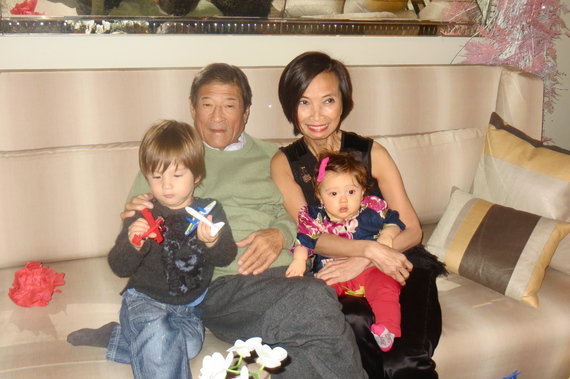 The point is: an immigrant becomes part of a minority community and then - an integral part of the all-American culture. Such seamless transitions certainly benefit all Americans.

According to Census, the non-Hispanic white population will become a minority in the US by 2043, while today's immigrant-and-minority communities will make up a majority. Meanwhile, there's no reason for these communities to postpone building a brighter future, separately inching towards diverse goals with limited effects - instead of pushing for common interests together, because their voting prowess and united efforts can bring rich payoffs sooner rather than later.