Immigration, ambition and identity tend to be perceived as intertwined strands of the American DNA, and it always renews itself. It should come as no surprise to anyone familiar with the culture of South Asian immigrants that both ambition and identity do a similar dance, often with greater intensity, and is among the latest variations on a familiar American story.

In Dallas recently for the second annual DFW South Asian Film Festival (DFWSAFF), where thirteen ground-breaking, sold-out screenings of shorts, documentaries and feature films during its three-day festival (Feb. 19 to the 21) at the Perot Museum in downtown Dallas and the Angelika Film Center in Plano, I was delighted to view the comedy feature film Miss India America on Opening Night.

More than 350 people attended the opening night film, red carpet and festivities at the Perot, followed by another 1200 cinephiles at the Angelika on Saturday and Sunday. Every film was either a Texas or U.S. premiere, and the festival's closing night film, Hansal Mehta's powerful Aligarh, was the North American premiere.

Miss India America stars Tiya Sircar (The Internship, Star Wars: Rebels) and Hannah Simone (Fox's "New Girl," Oldboy), who also serves as an Executive Producer. It was directed by Ravi Kapoor and co-written by him, alongside his wife Meera Simhan. Meera is a Creative Producer on the film, and one of its stars. It was produced by Megha Kadakia and Saurabh Kikani.

Miss India America is less a film about Indian identity, and more a story about the limits of American ambition, which explores how the drive to succeed at all costs reveals the best and the worst of who we are. It's a journey that most immigrant communities to the U.S. embark upon, and South Asians are among the most recent to wrestle with these issues. Miss India America explores these ideas through a comedic lens, combining beauty pageants, overachievers, and a vibrant California-based South Asian community.

The striving for greater success is not unique to South Asian immigrant groups, but the raised public profile of this community has put them in a brighter spotlight in recent years. With statistics stating that Indian-Americans have become the most affluent group in America, and with high-profile leaders across multiple industries, from medicine and the tech industry, to political offices and the arts, it is timely that a film such as Miss India America arrives, and explores the theme of what success really means and why we are driven to achieve it, particularly within the context of the Indian-American community.

1200 cinephiles at the Angelika in Plano on Saturday and Sunday.
Photo: Selig Polyscope Company.

The film focuses on Lily Prasad, a high school valedictorian with ambitions of being a Harvard-educated brain surgeon, who has always won at everything. She suddenly finds herself in the shocking position of having lost her boyfriend to a reigning beauty pageant queen. Not one to be beat, she decides she must now join the pageant competition, and win at all costs.

In a telling scene from the film, Lily has a heart-to-heart with her father, who reminds her that he rose up from poverty in India, to become a successful physician in Orange County, CA. The American Dream writ large. It is in scenes like this that the film touches upon the subtext of ambitious drive for immigrants and their children.

Jaswant Lalwani and Aroon Shivdasani were among the many New Yorkers
in town for the Festival. Photo: Selig Polyscope Company.

Discussing these themes, Saurabh Kikani, one of the film's producers, and a son of Indian immigrant parents, told me:

I think that one of the factors driving all immigrants and their kids is this sense of making the sacrifice worth it. Whether the circumstances in your home country were good or bad, you are leaving behind an entire reality and sense of history which makes up your identity - from language, to food, to cultural norms.

You can bring these things with you, but even then they get transformed and contextualized differently. It is a real loss. So you have to make that loss mean something.

You have to better yourself and your circumstances through whatever lens matters to you, otherwise what was the sacrifice for? More importantly, who are you now, if you've left everything which defined you behind?

On a related note of identity, the film cannot help but touch upon themes of female empowerment, as the near uniformly South Asian-American cast is also female. Each character is distinct, and avoids the stereotypical pitfalls associated with films which do not pass the Bechdel Test, which measures a fictional narrative's bona fides in providing an active presence of women.

The director of Aligarh, Hansal Mehta, Skype'd in to the festival for a Q&A.
Photo: Selig Polyscope Company.

Miss India America's purpose is not to delve deeply into the social psychology of immigrant communities, or gender politics, but in its telling of a young woman's struggle with ambition and identity, the DNA of this South Asian immigrant comedy is as American as can be.

The film opens in select theaters in D.C., San Jose and Chicago on March 25th, and it will be available online starting April 5th on a variety of VOD platforms.

Lining up to see the next film at the Angelika. Photo: Selig Polyscope Company.

"The responses we got from our audiences were overwhelmingly positive," said founder and festival director Jitin Hingorani. "People thanked us for bringing this revolutionary programming to North Texas, and they said they are already excited for next year's festival."

The festival, produced by JINGO Media, a NYC and Dallas-based PR and events boutique firm, also presented networking events, after-parties and post-screening Q&A sessions with fourteen filmmakers and actors in attendance from all over the world.

Each and every film was riveting, but I really moved by Hansal Mehta's Aligarh, shocked by Help Us Find Sunil Tripathi about the suspect in the Boston Bombing, moved to tears by The Backward Class, and truly tickled by I Say Bhallaji, Dhanak - and Miss India America.

The entire lineup of films, including trailers and synopses, is available on the festival's website. 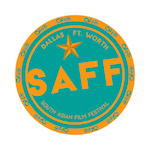